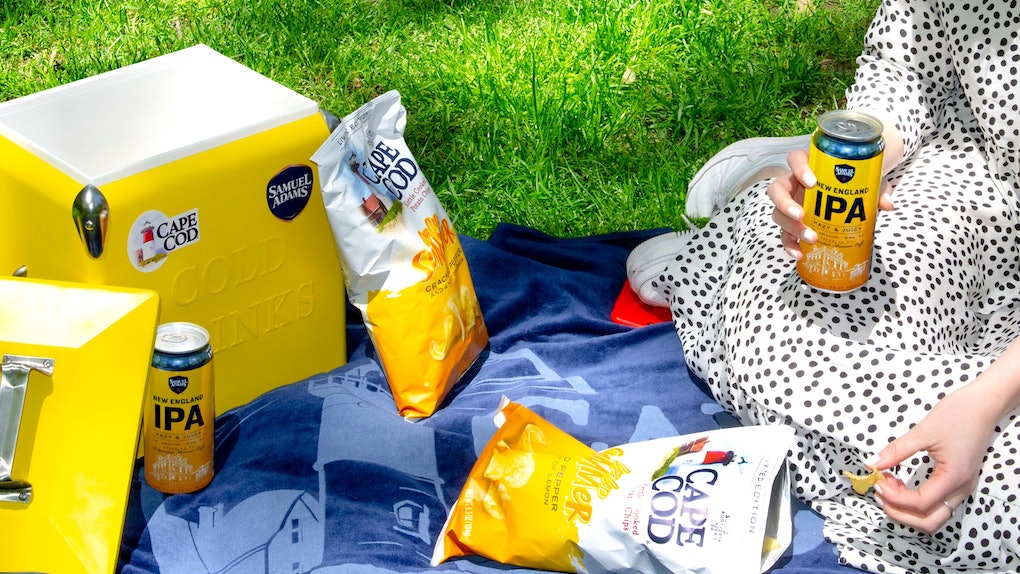 It's hard to believe that Memorial Day, aka the unofficial start of patio season, is just days away. Luckily, you don't have to wait until then to transport the flavors of a New England summer to your tastebuds, thanks to the release of Samuel Adams Brewery and Cape Cod's Summer Potato Chips. The brewery and the Massachusetts-based company have teamed up to come up with the ultimate pairing of beer and potato chips, so get ready to capture the taste of summer in your patio season snack spread.

When it comes to food and drink pairings, beer drinkers have been (unfairly) largely left out of the game. While there's no shortage of recommendations surrounding the various cheeses, protein, and pasta that would perfectly marry your glass of wine, there haven't been as many comparable options for your favorite pint of ale or lager — until now.

According to press materials shared on Tuesday, May 21, two iconic New England institutions — Cape Cod Potato Chips and Samuel Adams Brewery — worked together to create a potato chip flavor that'll pair perfectly with the "citrus fruit notes and hazy, juicy taste" that you'll find in a pint of Sam Adams New England IPA. If you've yet to try the IPA, it's described as "a punch of mango and peach with a smooth finish" on the Samuel Adams website. The brewery recommends pairing the fruity beverage with everything from clam chowder and Pad Thai to cheesecake and rhubarb pie, depending on whether you're craving something savory or sweet, and now you can add potato chips to that list.

While the Sam Adams New England IPA is available year-round, there's just something about citrus-infused bites and sips that always make me think of summertime. Luckily, the two companies agree on this fact, and the new limited-edition Cape Cod Summer Potato Chips promise hints of lemon and cracked pepper with every crunchy bite.

I'm all for trying a snack that perfectly balances the right amount of saltiness with the tanginess that you get from citrus fruits, and it's just an added bonus that you can head to your next patio season gathering with a beer and a bag of chips in hand and just know that they're going to complement each other. Whether you choose to alternate bites of the crunchy treat with swigs of beer or you're brave enough to dip a few of the specialty Kettle Cooked Potato Chips into your pint of IPA, it's a classic combo that's been upgraded with summer flavors.

Unfortunately, good things don't last forever, and the limited-edition bites will only be on sale until the end of summer. According to press materials, Cape Cod's Summer Potato Chips will be available for purchase at "select retailers" for $3.79 until fall comes around, so you still have a few months where you can add a little extra warm weather flavor into your summertime excursions.

The start of summer is just around the corner, y'all, and while there's no better way to celebrate than by swigging your go-to rosé alongside perfect cheese pairings. You might just want to try swapping out your pink wine for a refreshing combination of beer and potato chips once in a while. Cheers!