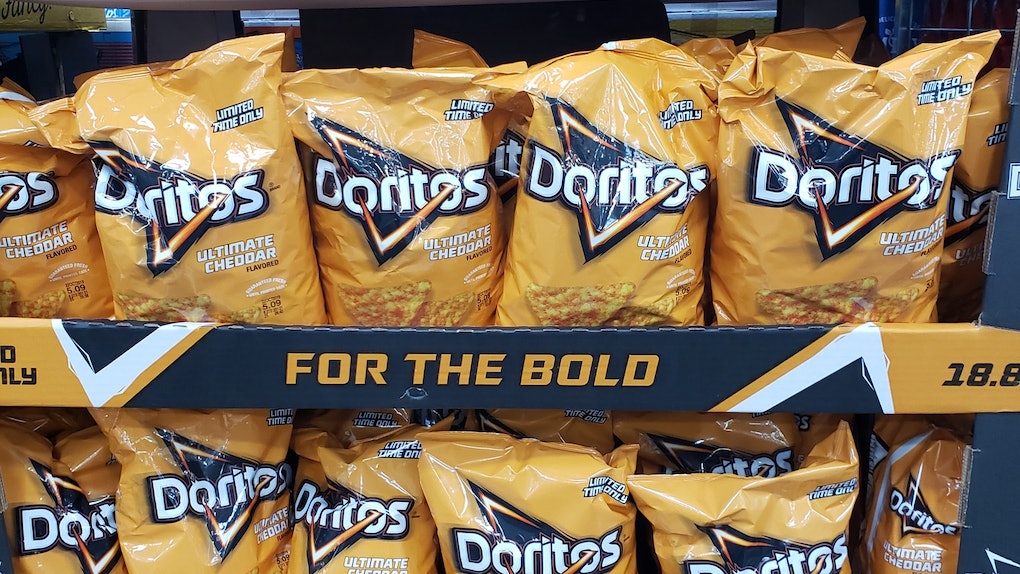 Just weeks after announcing that Screamin' Sriracha-infused Doritos will be coming to shelves in October, the company is revealing that it's about to get so much easier to get your cheesy snack cravings under control. A rep confirmed to Elite Daily that Sam's Club is selling Ultimate Cheddar Doritos, and the family-sized bags are currently retailing for just $3.49 each. To be honest, the flavor looks even better than the Nacho Cheese variety that we all know and love, so you're going to want to stock up your cupboards with this limited-edition offering.

As much as I love a good inventive flavor, there's just something about classic, fail-proof ingredients that make them a staple in my snack rotation. When I first learned that Ultimate Cheddar Doritos were available at a Sam's Club near me as of Aug. 16, my first reaction was joy for what my tastebuds were about to experience. The second? Surprise that the chip company hadn't already tried this flavor before. I did some digging, and it appears that while this is the first time that Ultimate Cheddar Doritos have been available in the United States as a stand-alone product (a rep confirmed that they were previously released in the Doritos Collisions bag that had both the Ultimate Cheddar and Blaze chips), they've apparently previously been spotted in other countries like Spain and Canada.

If you're wondering what to expect from a bag of these bad boys, you'll be getting "the classic Doritos crunch with the bold flavor of cheddar cheese," according to the snack company. In other words, it sounds like you're in for a cheesy update paired with the satisfying texture of a Doritos chip, which is probably why the 18-ounce bags are already flying off shelves and selling out at Sam's Club clubhouses. However, the rep confirmed that you shouldn't be too disheartened if you get to your closest Sam's Club to discover that there aren't any bags of Ultimate Cheddar Doritos left, as the company will be regularly restocking while the limited-edition snack is being offered. Still, there's no telling exactly when the company is planning to pull the flavor for good, so I'd probably grab as many bags as you can carry if you do happen to see them at your local Sam's Club or order them online for pickup. It sounds like you're definitely better safe than sorry when it comes to getting your hands on these snacks.

If you don't have a Sam's Club membership, it sounds like you can still get in on the Ultimate Cheddar train by heading to your nearest 7-Eleven. Instagram user @Markie_Devo confirmed in a post just a few days ago that a fellow blogger had spotted the treat in a New York City location. In other words, I'd probably keep my eyes peeled the next time you're grocery shopping to see if these bad boys are rolling out to a number of locations.

Again, just a reminder that these cheesy updates on the OG Doritos are only available for a limited time, so I wouldn't sleep on stocking up if you do happen to run across them.