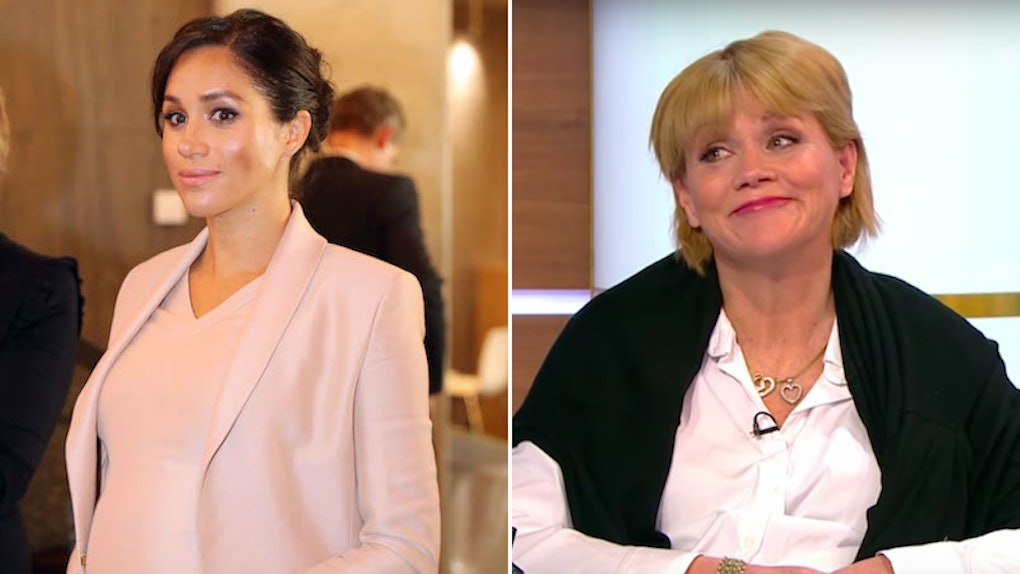 Hey, do you feel like getting angry today? You do? Great. So it's a surprise to literally no one that the Duchess of Sussex's half-sister, Samantha Markle, has had no problem calling out the soon-to-be mom, and her most recent Twitter tirade proves it. While Meghan Markle made a surprise visit to a charity that helps sex workers get back on their feet, she wrote words of encouragement on a bunch of bananas that were being delivered to the women. So sweet, right? Well, Samantha Markle's tweets about Meghan Markle's banana affirmations will make you roll your eyes so hard, because it seems she can never just support her royal half-sibling. Elite Daily reached out to both Kensington Palace and Samantha Markle's teams for comment on the report, but did not hear back by the time of publication.

Here's what happened: On Feb. 1, Meghan Markle and Prince Harry made a surprise visit to One25 in Bristol. According to its website, One25 is a charity that "enables women to break free from street sex-work, addiction and other life-controlling issues and build new, independent lives." It's all sorts of powerful and amazing, right?

While on their visit, Markle decided to write words of encouragement on a bunch of bananas that were being delivered to sex workers. According to royal commentator Omid Scobie, Markle was "inspired by a cafeteria manager at a school in Virginia who had done the same last year," and honestly, this is part of the reason why Meghan Markle is, to me, a woman of the people. Consciously making the effort to go above and beyond to show her support to sex workers is inspiring and should be applauded.

Scobie posted the details of the Duke and Duchess of Sussex's visit to Twitter, complete with a heartwarming video of Markle coming up with the idea of writing words of encouragement on the bananas that were being delivered, and explaining where she got the idea from:

I love this video on so many levels. Meghan Markle and Prince Harry are really nailing this whole "being royal but staying humble" thing.

But, you guys. We just can't have nice things, can we?

Instead of praising her half-sister on her charitable deeds, Samantha Markle instead took to Twitter to diss Meghan Markle's idea, noting that she should have given them all a "bouquet of flowers, words of strength, and enough money to change their lives."

According to screenshots obtained by Cosmopolitan, Markle began her most recent rant about Meghan, tweeting:

The whole world has commented about this. I am not exempt because I'm family. I was hoping my sister would give them each a beautiful bouquet of flowers, words of strength, and enough money to change their lives. That is what #humanitarians do. Bananas? WTF #Freedomofspeech

She continued on (because of course she did), and in a second tweet, writing:

Maybe when she's asking for the big spending allowance, Charles should just give her a banana with some writing on it instead of cash.

And, because Meghan Markle's family drama is always at the heart of Samantha Markle's shady comments, Samantha decided to circle back to Meghan's estranged relationship with her father, Thomas Markle. Samantha wrote that if Meghan can write words of inspiration to a sex worker, she should be able to do the same for their father:

Totally just kidding. Samantha Markle has, once more, inserted herself into a place she doesn't belong and, rather than being proud of her half-sister, she belittles her instead. Perhaps Samantha should take a page from Meghan's book and practice words of kindness and encouragement, hm?