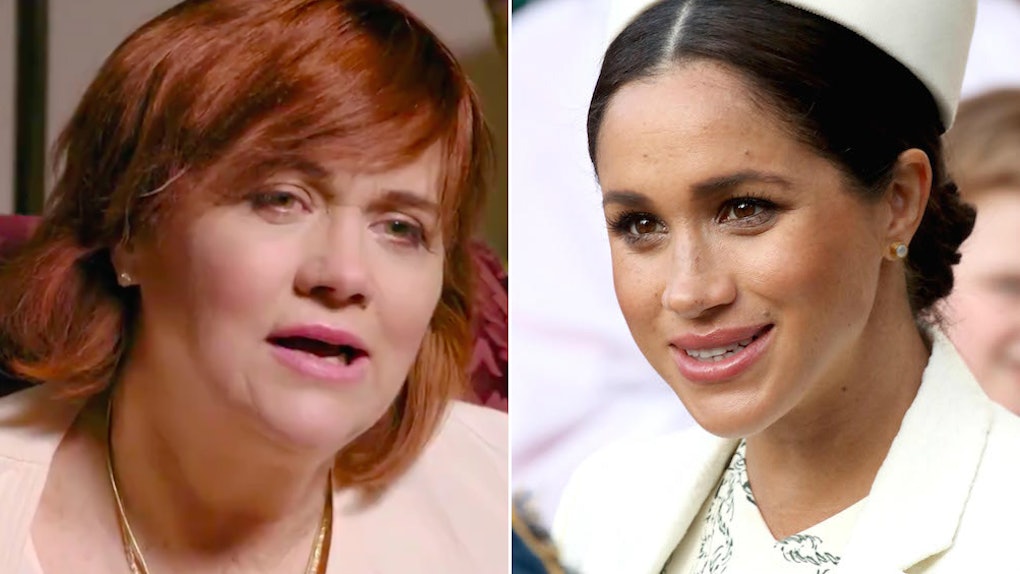 Samantha Markle is back at it again. The Duchess of Sussex's older sister has made her way into the news cycle at her sister's expense again this week, this time with the help of TLC. The network recruited her to be part of its Meghan & Harry: A Royal Baby Story special that aired on Tuesday, April 9. Samantha Markle's quotes about Meghan in A Royal Baby Story were — surprise, surprise! — hella rude and shady. Elite Daily reached out to the Palace for comment on Markle's comments on the TLC special, but did not hear back by the time of publication.

The entire special features celebrity correspondents who have been covering royal family news giving their take on Meghan Markle's pregnancy and the public reaction to it. One of the hottest points of controversy in the tabloids ever since the Duchess' pregnancy was announced in October 2018 was the expensive clothes she's been wearing. (She's literally a duchess in the royal family, y'all. You think she's gonna wear GAP?)

Two of the reportedly exorbitantly expensive dresses discussed in the special were a black-and-white Oscar de la Renta gown Meghan wore shortly after her pregnancy was announced, and a light-beige Dior dress she wore later in her pregnancy. One of the celebrity journalists in the special theorized that Meghan is choosing to wear these expensive dresses because she never got to go to the Oscars, Emmys, Golden Globes, etc. during her acting career, so now she's living out the A-list actress fantasy. Uh, first of all, very rude! That heavily implies that Meghan is just fame hungry. Maybe she's wearing these dresses now because, oh, I don't know, she is English royalty?

Also, when celebrities wear designer gowns, they often are not buying the actual gowns to own. They're gifted as a loan from the designers to these celebrities as a means of marketing the designer. Now that Meghan is one of the most famous women on the planet, it's no surprise that designers would now want her to be seen in their clothes more than they did when she was on Suits. So she's probably not even spending money on these dresses during her pregnancy. For some reason, though, TLC had Samantha Markle do an interview to comment on all of this.

"I would spend less," Markle said in response to Meghan's dresses. "I think a lot of people would. So that has been a bit controversial."

When talking about the royal baby, Markle had one positive thing to say about the upcoming birth.

"I think between her own natural endorphins and peace and meditation, and the medical staff standing by, I think she will do very well," she said. "Hopefully she will give birth in whatever comfortable, safe setting she feels best in." See, Samantha? That wasn't that hard, was it?

As for when the baby is finally here, Markle thinks her sister will employ a big team of nannies and basically treat them all badly. Cute.

"I think Meg will definitely get a nanny," she said.

"I'm pretty sure that her threshold for stress could be quite low in the beginning," she added. "How many rooms in Frogmore [Cottage, the house Meghan and Harry have moved into]? I can see them all being filled with nannies…Meghan is very strong-minded, and there will definitely be a butting of heads, but Meghan could learn and grow from that. So if the nanny is strong enough, then she won't be left in tears." Jesus Christ.

Of course, Markle wasn't going to make it through this interview without mentioning how mistreated she thinks her and Meghan's father has been throughout her marriage to Harry.

"I certainly think it's unfair to overshadow how integral dad [Thomas Markle] was in [Meghan's] life," she said, "It's not that we were never there. We've gone to your dance recitals, holidays, Thanksgivings… Now all of a sudden we don’t exist. You can't hurt people like this and then turn around and flip the script and play victim."

Finally, Markle said that she thinks it's important that she and the Markle side of the family be involved in the royal baby's life. She said it's "important that children have a bigger sense of their family and where they come from."

"I would like to think that this child would have access to the best parts of granddad…and get to know that side of the Markles," she said.

Hopefully, Markle isn't so shady that she would say something mean about the baby when it arrives. I'd like to think she wouldn't, but this woman can't surprise me at this point.