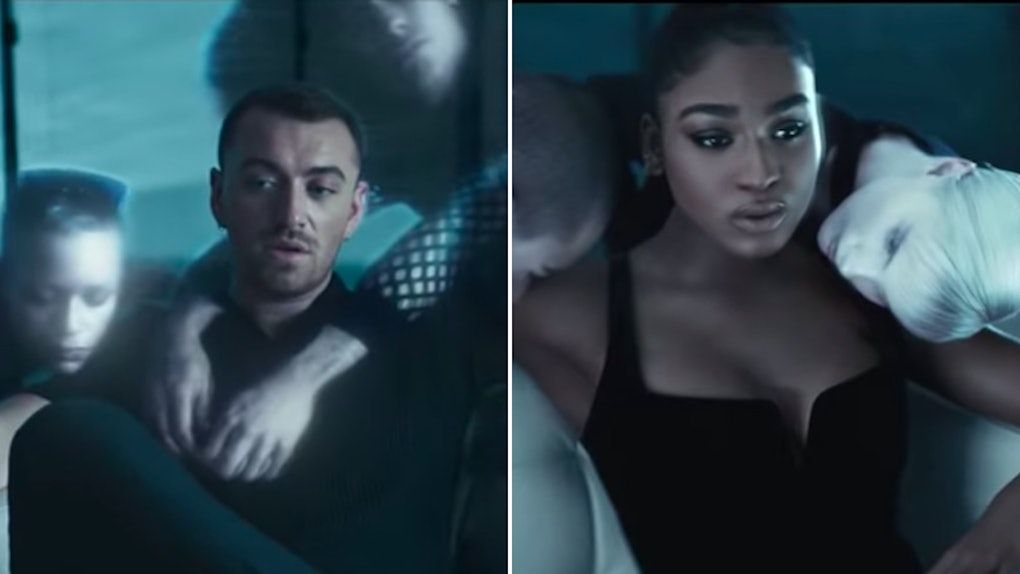 Yes, yes, yes. All I can say is that today is a great day, and it has everything to do with singers Sam Smith and Normani collaborating together on an incredible song called "Dancing With A Stranger." The 26-year-old Grammy winner teamed up with the former Fifth Harmony singer to create an absurdly lovely song, but it's Sam Smith and Normani's "Dancing With A Stranger" video that will give you all the emotional feels.

Making its debut on Tuesday, Jan. 29, the music video for "Dancing With A Stranger" captures all of the things you seemingly feel when you go through a break-up, and the sometimes fleeting connections you make with others to stop the feeling of being lonely. The music video, which was directed by Vaughan Arnell, shows Smith and Normani in a posh, modern and intentionally bleak home, trying their best to stay away from random connections (that, to me, felt a lot like the singers swiping through a modernized 3-D Tinder).

And, while the song's lyrics are somewhat somber and sad, the background music is somewhat upbeat, causing what feels like the glorious lovechild of a breakup song and a pop song. But all you really need to know is that the video is so, so good.

Smith took to Twitter at midnight to finally debut the video. "I’m so happy to finally show you the video for dancing with a stranger with @Normani!!," he tweeted, adding, "This was directed by Vaughan Arnell and we had so much bloody fun making this one!! So lucky to work with such talented and kind people xx ❤🌹"

Check out the video below to see for yourself. Just be careful, because watching Normani dance will give you whiplash in the best way possible, because that girl can move, you guys.

After watching this video, it's kind of hard not to speculate as to whether or not the lyrics have anything to do with Sam Smith and Brandon Flynn's breakup back in June 2018. On June 27, Page Six reported that the pair had reportedly split after dating for nine months. The site noted that a source close to the couple said, "Sam and Brandon had a real whirlwind romance. They really fell for each other. But they are both so busy with their careers and unfortunately things just haven’t worked out." The source also added that Smith was "devastated" and that his relationship with Flynn was "the most significant relationship he has ever had." Elite Daily reached out to both teams about the report, but have not heard back by the time of publication.

Still not over it, TBH.

Personally, I feel like there could be some of Smith's personal experience weaved into the song's lyrics. Some of the lyrics to "Dancing With A Stranger" go:

Ugh, this is breaking my damn heart. Is it weird that I will literally do whatever it takes to make Sam Smith happy? Although, in all honesty, it seems like he's doing OK, especially with this new music video collab with Normani. Perhaps things are going to turn around for Smith, so he no longer feels the need to dance with any unfamiliar faces. And Sam, if you're reading this: I'm a very good dance partner, so, you know, feel free to text.

More like this
Is Saweetie's "See Saw" About Quavo? The Lyrics Are Brutal
By Corinne Sullivan
Olivia Rodrigo's Reaction To Getting Her First Parking Ticket Was Priceless
By Brandy Robidoux
Is Taylor Swift's "Mr. Perfectly Fine" About Joe Jonas? Sophie Turner's Instagram Has Fans Curious
By Brandy Robidoux
Stay up to date