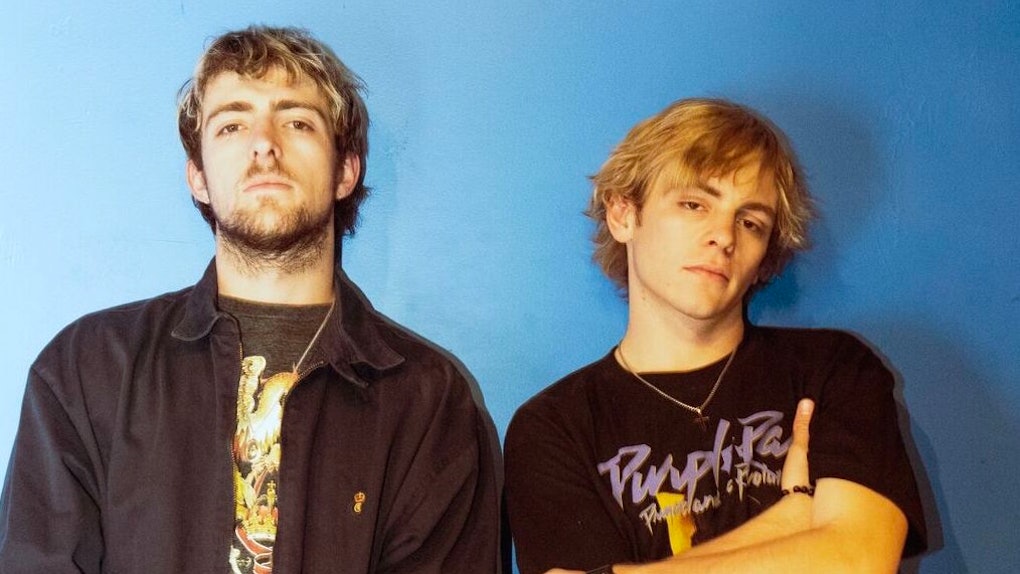 Netflix's Chilling Adventures of Sabrina shocked viewers with its deliciously dark plot. Given that the original Sabrina The Teenage Witch series was very much a feel-good sitcom, the new show being so loyal to the original comic's dark happenings came as a surprise and a delight. No one loves the dark qualities of CAOS as much as Ross Lynch, CAOS' very own Harvey Kinkle, who makes up one half of music duo The Driver Era. The other half is his older brother, Rocky Lynch, and Ross and Rocky Lynch's "Welcome To The End Of Your Life" is a '90s grunge-inspired track that's just as dark in content as Ross' current acting gig.

Ross and Rocky used to be part of R5 — a pop group which was also comprised of their siblings Rydel Lynch and Riker Lynch, and family friend Ellington Ratliff. The group was making music and touring before Ross booked a leading role on Disney Channel's Austin & Ally, then their music and TV success led to a record deal with Disney's Hollywood Records. The Driver Era marks Ross and Rocky's official departure from R5, Disney, and Hollywood Records, and their foray into independent artistry.

If we make music that’s good and honest and people want to listen to, there’s nothing else that necessarily matters in the long run.

Ross and Rocky tell Elite Daily that going from being signed under a label to being independent artists is "dramatically different." For starters, they now make all of their music in a studio they set up in their garage in Los Angeles.

"We’re not really necessarily looking for an immediate approval from a potential investor," Ross tells me. "Now, it’s much more about what feels good."

He continues, "Now, it’s much more about what feels good. And it’s always been about what feels good to us and what we like, but essentially there’s one less filter we have to filter our music through. It’s actually not filtered at all, because even if we show our songs to anybody and they don’t like it, that’s fine."

They make it clear that their relationship with Hollywood Records was largely positive and that they learned everything they know about music production from their time with the label, but being independent artists was just a better fit.

That freedom to create has resulted in music from the duo that doesn't necessarily all fit into one specific genre. Listening to their singles, you can hear the experimentation going on as they figure out the perfect Driver Era sound.

I hope your ears question why they like this so much.

"Welcome To The End Of Your Life," which was released on April 26, is a standout in their collection of singles. (You probably noticed that just by way of the title.)

"The song is like a big juxtaposition, because it sounds dark and the lyrics presumably are dark, but I think the message is positive," Ross says.

"I hope your ears kind of question why they like this so much," Rocky adds, "because the song’s progression is already in a slightly dark, progressive place, but at the same time, that song is reactive."

The one thing the boys want fans to take away from the song? "That baselineeeeee," Ross says in a drawn-out fashion.

The Driver Era dropped the "Welcome To The End Of Your Life" music video on April 30.

The video's concept (which totally reminds me of Angela Anaconda) was ideated by Ross and Rocky themselves, they tell me, and that all of The Driver Era content in the future is going to be a product of their own creativity. That concept is admittedly dark, Ross and Rocky say, but the video clarifies the song's meaning when it reaches a climax near the end.

Throughout the video, viewers see a stop-motion animated 9-to-5 office lifestyle. At the end, positive messages about making the most out of your life are strewn throughout the windows of the "office buildings." Then, a monster surrounded by pill bottles appears, and the song goes off.

Ross sings, "Now it's just me and a mirror / Can't tell if I'm really here / I think I'm leaving this body." While this could be interpreted as dark and morbid, it's really more about coming to the realization that you either confront the fact that your life isn't what you want it to be and change it, or you die unfulfilled.

That sounds pretty damn millennial to me, a millennial. And it's not hard to see where Chilling Adventures of Sabrina has influenced the video. Monsters, and death, and angst? Yeah, that's CAOS' influence if I ever did see it.

The Driver Era hasn't released any EPs or a debut album just yet (all of their releases thus far have been singles), though they say they hope to soon. They've been on tour over the last few months (you might have seen Ross trending on Twitter after fans swooned hardcore over tour videos), and Rocky says they're looking forward to playing this specific song for their fans.

"That song is reactive," Rocky says, adding that playing it for friends and younger cousins gets a rise out of them that he and Ross love to see. "That’s when we know you’ve got something that’s kind of eclectic and a little left of center," he continues, "You’re like, all right, this has got some wheels."

When it comes to their future as independent artists, they're admittedly a bit nervous. But these guys are seasoned musicians. Their R5, Disney, and Hollywood Records days taught them everything they needed to know about making music, and now, they say, it's just about trusting their skill.

"I think a lot of what we learned was really to just trust ourselves more and to not rely on other people as much," Ross says of their time with Hollywood Records. "It was kind of like, you know, being independent works for us so well. We write and produce all our own songs, then we’re literally putting our own music videos into production right now. I think that was the most valuable lesson, to really trust ourselves."

Rocky adds that self-doubt is natural, but they're also naturals at making music.

"Anytime we ever experienced a situation where we were kind of like, ‘All right, will this do what we want it to do?’ we always kind of came back with, ‘Yo, are we making good music?’" he says. "That’s literally the bottom line. If we make music that’s good and honest and people want to listen to, there’s nothing else that necessarily matters in the long run."

You can jam out to The Driver Era's "Welcome To The End Of Your Life" on all major streaming platforms.