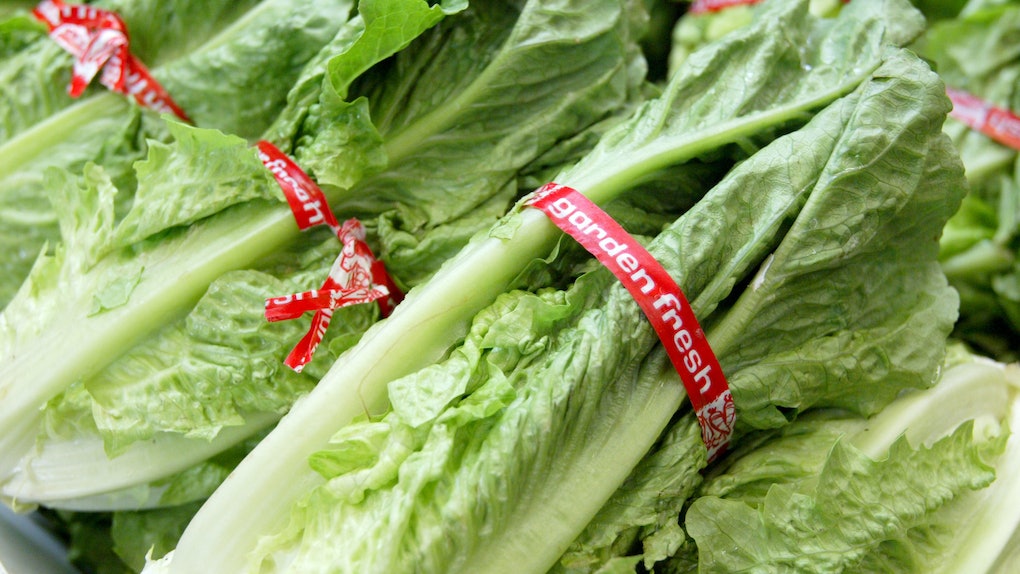 Romaine Lettuce Might Be Linked To E. Coli Outbreaks, So Choose A Different Green For Now

Flu season is currently in full swing, which means you probably know someone who's sniffling or coughing — and it could only be a matter of time before you contract the nasty virus. As if that doesn't leave us with enough to worry about, there's another health scare going around: Romaine lettuce might be linked to E. Coli outbreaks in the United States. Here's what you need to know to protect yourself.

According to Consumer Reports, 58 people in the United States and Canada have become ill from a strain of E. Coli bacteria since the start of November. Canadian health authorities have traced the outbreak to romaine lettuce, and the CDC has reported that the strain of E. Coli causing illnesses in the U.S. is genetically similar to the strain involved in the Canadian outbreak. However, government health officials are still investigating the source of the outbreak in the U.S. In the meantime, Consumer Reports' food safety experts recommend staying away from romaine lettuce.

"Even though we can't say with 100 percent certainty that romaine lettuce is the cause of the E. coli outbreak in the U.S., a greater degree of caution is appropriate given that lettuce is almost always consumed raw," says James Rogers, Ph.D., Director of Food Safety and Research at Consumer Reports.

So far, infections have occurred in California, Connecticut, Illinois, Indiana, Michigan, Nebraska, New Hampshire, New York, Ohio, Pennsylvania, Virginia, Vermont, and Washington state. The Centers for Disease Control and Prevention (CDC) has reported that five of those infected in the U.S. have been hospitalized, and one person has died. One death was also reported in Canada.

Young children, the elderly, and people with conditions that weaken the immune system — such as cancer or diabetes — are at greater risk of contracting the infection. Rogers says that these groups "should be particularly vigilant about avoiding romaine lettuce."

Romaine lettuce has not yet been recalled, as there is not enough evidence that it is causing the outbreak. Still, Consumers Union, the policy and mobilization division of Consumer Reports, is urging the Food and Drug Administration (FDA) to warn the public about the current risks of eating romaine lettuce.

“The available data strongly suggest that romaine lettuce is the source of the U.S. outbreak," says Jean Halloran, director of Food Policy Initiatives at Consumers Union. "If so, and people aren’t warned, more may get sick.”

There is currently no indication as to whether or not the romaine lettuce potentially involved in this outbreak was raw or processed — so for now, it's best to stay away from all forms of it, including pre-packaged salad bags. Romaine lettuce can have a shelf life of five weeks, so even romaine that's been sitting in your fridge could be contaminated.

E. Coli outbreaks are typically linked to beef (particularly ground beef), as the bacteria can get into the meat during slaughter and processing. However, produce can become contaminated if animal feces are in the field where it is grown, or in irrigation or washing water. E. Coli can also be transmitted by a person carrying the bacteria, if they use the bathroom without washing their hands and then process or prepare food.

If you have consumed romaine lettuce recently, don't panic, but keep an eye out for the symptoms of E. Coli infection, which can surface anywhere from one to 10 days after consumption. These include severe stomach cramps, diarrhea (often bloody), and vomiting, as well as a slight fever. If you have a high fever, bloody diarrhea, or severe vomiting (or if diarrhea lasts longer than 3 days), the CDC recommends seeing a doctor.