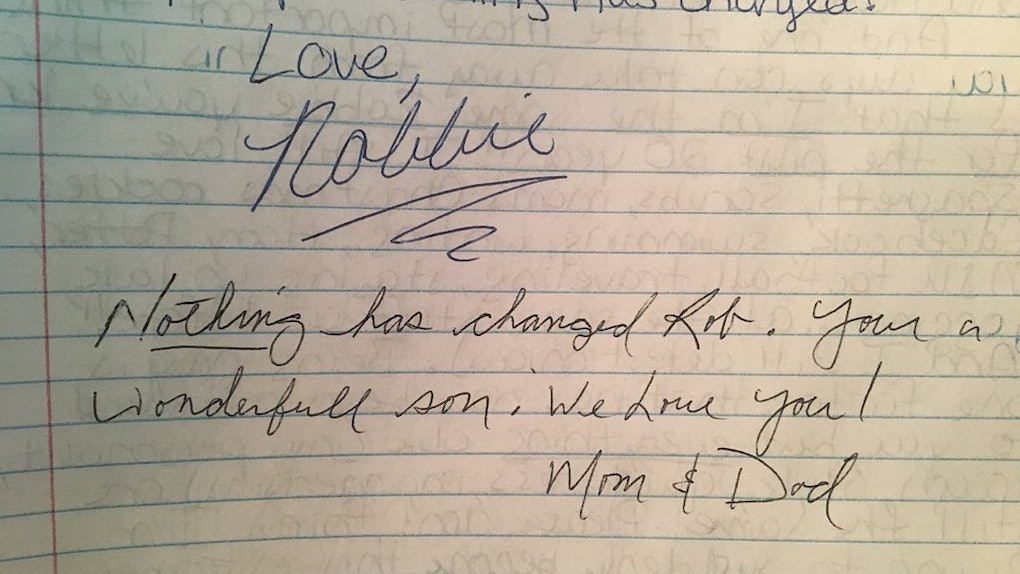 Robbie Couch Got His 2007 Coming Out Letter For Christmas, But With The Sweetest Note Added

Unfortunately, we still live in a world where being rejected by the people you love purely based on your sexuality is very real possibility for a lot of people (not to mention something that has already happened to too many people). Needless to say, this fear can cast a dark shadow on the entire coming out process for many. But sometimes, coming out can (and should, in a perfect world) be a very empowering, loving process. When Robbie Couch, a senior writer at UpWorthy and Good, decided to come out to his parents a long time ago, he chose to do it in the form of a letter to his parents. And now, over a decade later, Robbie Couch's coming out letter has come back into his life in the sweetest way possible.

When writing the letter at just 19 years old, Robbie tells Elite Daily that he was "absolutely terrified." He explains that, at that point, he was "still closeted to most people." "I was convinced that my world would come crumbling down if they took the news badly," he says. Despite that immense fear, he pushed through and wrote the letter anyway.

Luckily for Robbie, his parents took the news better than he expected. "My parents were surprised, but they responded better than most," he explains. "They definitely had some awkward questions, to be sure, but they always had my back." Rather than being a source of stress and contention, his parents still loved him the way every parent should love a child: unconditionally. And now, over a decade later, they reminded him of their unconditional love by giving him a copy of his letter back to him as a Christmas gift. Only this time, they added their own note to the end.

Here are some close-up snippets Robbie shared of the original letter:

And here is his parents' beautiful note at the end:

They wrote, "Nothing has changed. You’re a wonderful son. We love you. Mom & Dad."

The note already has me tearing up, and I have nothing to do with this family, so you can only imagine what an emotional moment it was for Robbie. "I definitely got a bit teary-eyed reading their added note on Christmas," he tells Elite Daily. "To know you’re unconditionally loved is so important."

Despite his initial fears of coming out, Robbie says that the experience actually ended up being a really positive one for him and his family. "Since I came out a decade ago, I’ve grown much closer to my mom and dad," he says. "For me, being my authentic self — even if it was a bit tough at first — greatly improved all of my relationships."

That being said, he does acknowledge that his supportive and loving parents categorize him as one of the "lucky" ones: "I know I’m lucky though; many kids come out in much tougher circumstances." While 19 years old felt like the right time for him to come out, he says that the right time is different for every single person. "Every individual should decide on their own terms when and how they should come out."

If you have any friends or family members who are members of the LGBTQ+ community, use this story as a personal reminder to embrace them with open arms always and to remind them that their identities don't affect your unconditional love for them. And keep in mind Robbie's words of wisdom. If your friend or family member isn't ready to come out, don't pressure them to do so. When they come out is ultimately their decision, and all you can do is be there ready, willing, and able to support them with open arms when they choose to do so.