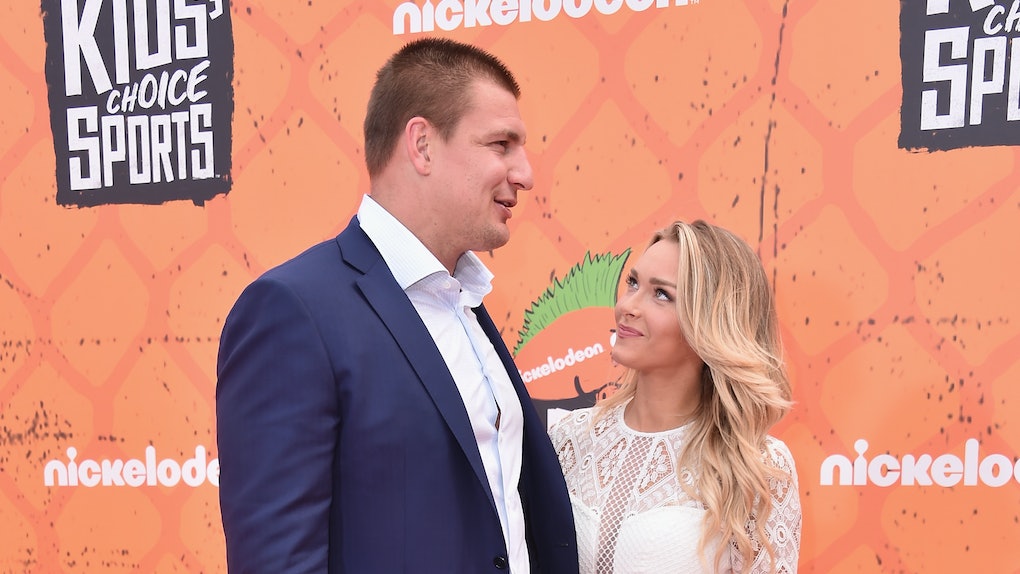 Patriots tight end Rob Gronkowski and his girlfriend Camille Kostek, a model and former Patriots cheerleader, are honestly couple goals. The two have been romantically linked for at least three years now, and they’re nowhere near finished, as evidenced by their super public professions of affection on social media. The football legend and Sports Illustrated model love showing their support for one another both on and off the field. But will they last? Curious about how these stars vibe as a couple, I wanted to find out some backstory on Rob Gronkowski and Camille Kostek’s body language and what it all means.

I reached out to body language expert Blanca Cobb to get her opinion on this famous couple and how they interact with one another. She revealed some pretty interesting things about what their body language denotes — things that I would never have thought to notice! As it turns out, sometimes the tiniest details can disclose big patterns in a relationship, and it takes an expert eye to know how to break it all down. Gronkowski and Kostek’s photos together made me smile because they reveal the cutest thing about this couple’s relationship and give me even more reason to totally ship them in 2019.

They're a natural fit.

According to Cobb, what’s special here is the way Kostek is pulling her face close to Gronkowski, despite their height difference. (He is 6'6" and she is 5'8".) “She’s pulling herself toward him and I think it’s cute, and you can tell that he’s enjoying it,” she says. Their carefree smiles show how easy it is to be with one another. They’re loving their time together and want to share it with the world.

They don't take life too seriously.

This silly video not only shows off Kostek’s strength, but it also reveals how much fun the couple has together. “When you can still have fun with your partner after being together for a few years, I think that says something,” Cobb notes. “Too many couples lose that fun spirit, and this is not what we’re seeing in this photo, and I think that holds well for a long-term relationship." Despite having been in each other’s lives for years, these two haven’t fallen into any boring patterns — they still know how to keep things light and fun.

They're bold and confident.

This photo from the couple’s recent vacay in Jamaica shows off that natural confidence that both of them just seem to ooze. Cobb says that their open poses signify their comfort level with themselves and with one another. “When you feel vulnerable, you tend to cover your protection zones, and neither of them are,” she says. “Their arms are to their side, so they’re leaving their head, throat, midsection, and pleasure zones open. It’s a great sign.” Gronkowski and Kostek both have plenty of reason to be confident AF, and this flirty pic shows how much they’re loving life.

They're on the same path.

While this photo is obviously meant to be posed and lighthearted, the surprising thing to pay attention to is the couple’s feet. “Your feet are an indication of where you want to go,” Cobb notes. And although their heads are both turned toward the camera, their entire bodies are facing one another. “They’re torso to torso, they’re pleasure zone to pleasure zone, and their feet are facing each other,” Cobb observes. Even in this goofy moment, they are clearly having the best time.

This appearance at the 2016 Kids’ Choice Sports Awards marked one of the first times the couple has been spotted together in public, and their body language shows they were already feeling close. “He has his arm draped around her back and his hand on her left side right above her waist, and he’s pulling her close,” Cobb notes. “You want to get close and to be close to the person you love or the person you’re attracted to, and that’s exactly what we’re seeing in this photo.”

This couple seems like they're in it for the long haul. Their genuine love for one another comes through in these photos, and it’s evident how much they feel at ease in each other’s presence. It’s cute seeing them so happy, and I’m officially paying a ton of attention to be feet in all photos now. Who would have guessed?