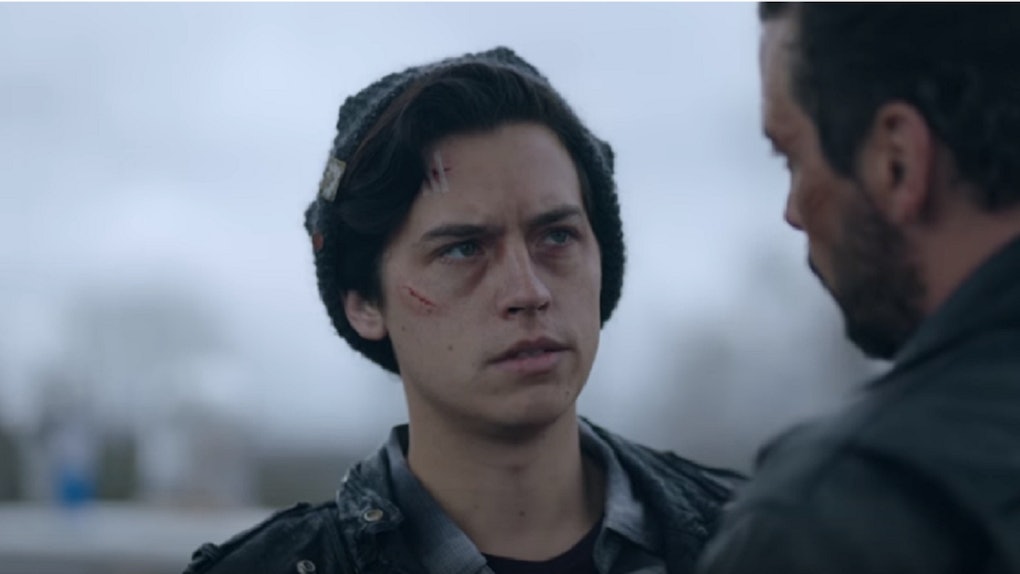 It's time for a family reunion on Riverdale. Jughead's complicated relationship with his dad FP seemed to enter steady territory in Season 2 when FP stepped down from his role as the head of the Southside Serpents and called Jughead forward as the gang's leader. The new chapter in the father-son bond inevitably means revisiting the past and how they reached their current point, so Riverdale just cast Jughead's mom and sister for Season 3. Time for some awkward family bonding!

At New York Comic Con on Oct. 7, Riverdale creator Roberto Aguirre-Sacasa spilled about the casting behind the remaining members of the Jones clan. Having announced the Season 3 arrival of Jughead's mom and sister earlier this year, Aguirre-Sacasa and several cast members revealed at their Comic Con panel that Gina Gershon will play Gladys Jones and Trinity Likins will be Jellybean "JB" Jones. Sorry, folks, but it looks like Dylan Sprouse will have to appear on Riverdale alongside his brother Cole, aka Jughead, in something other than that beauty pageant wig from The Suite Life of Zack and Cody.

A relative newcomer, Litkins has previously appeared in a Hallmark Christmas movie, while you may recognize Gershon from her 2017 stint as Lt. Melanie Hawkins on Brooklyn Nine-Nine. The Riverdale panel revealed that Gershon already filmed her first scenes with Cole Sprouse, KJ Apa (Archie), and Skeet Ulrich (FP Jones), while Aguirre-Sacasa also shared that Lili Reinhart, playing Jughead's girlfriend Betty, will soon have her own scenes with Gershon. We could've already assumed that Gladys isn't quite a typical mom, but the CW's press release about the character confirms that she probably won't be a warm and cuddly presence, saying:

[Gladys is] a ‘businesswoman’ who runs the salvage yard (chop shop) that doubles as a Serpent compound, and the Serpents all snap to attention when she gives them an order. A Serpent with a GED, she acts as Fagin to a crew of teenaged car parts thieves.

While she spends her time as a Serpent den mother, Gladys has undoubtedly forged a close connection with Jellybean, who has been living with her in Toledo under the name "JB." The younger character is described as helping Gladys "run scams to make ends meet" and becoming a con artist herself. Gladys and JB sound like an unbreakable duo compared to FP and Jughead, but Aguirre-Sacasa promised that Gladys' arrival will complicate FP's time away from the Serpents. In an August interview with The Wrap, Aguirre-Sacasa elaborated on what the Jones family reuniting will bring, saying:

When Gladys arrives, you know, she used to be the Serpent Queen, so I think there might be problems between her and Betty. And I think Gladys may know that FP and Alice had a history, they might be currently involved in the present, so that might be problems there as well... a character like Gladys has potential to disrupt or affect not just FP, not just Jughead, but Betty and Alice, and all of our characters. Those are the best characters on the show, the kind of characters that can shake up a bunch of people.

While the Riverdale team didn't share a first look at Gershon and Litkins in the family garb of leather jackets and beanies, the CW screened the first half of the Season 3 premiere episode, titled "Labor Day," on the Madison Square Garden stage. The episode kicks off with Archie standing on trial after being framed for the murder of Cassidy Brook. Following the courthouse drama, Gladys and JB will likely descend upon town and add another intriguing layer to the mysterious tone Aguirre-Sacasa and his cast have teased for Riverdale's third season.