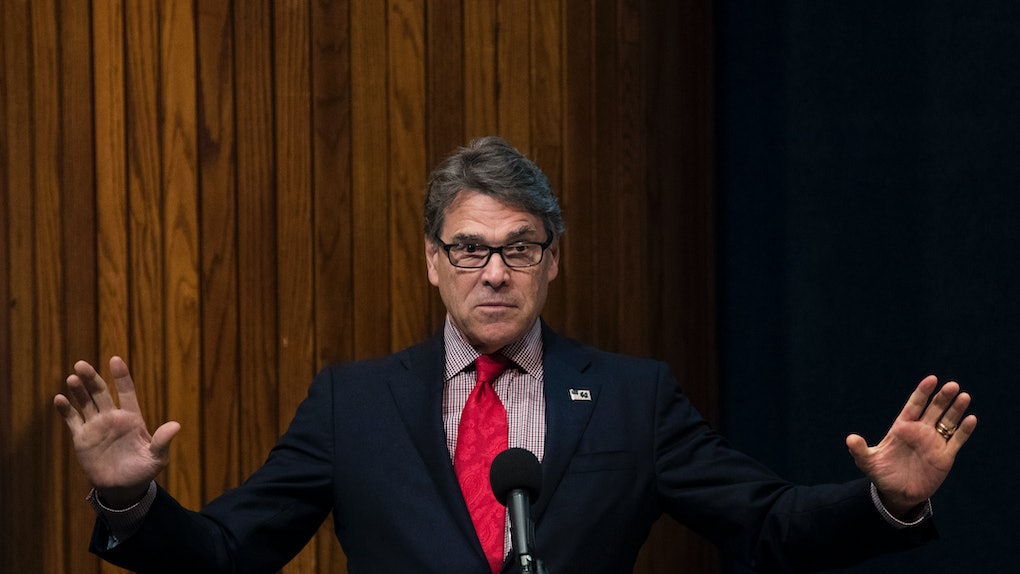 There have been plenty of uninformed suggestions about how to prevent sexual misconduct recently, but this one might be the biggest stretch. At a media event on Nov. 2, a protester shouted at the Secretary of Energy about climate change. In response, Rick Perry's sexual assault and fossil fuel remarks were totally off base.

Secretary of Energy Perry was speaking at an event sponsored by the outlets Axios and NBC News about the Trump administration's energy policies on Thursday, when a protester yelled a criticism about how fossil fuels hurt people in poorer countries. In response, Axios reported that Perry suggested electricity could prevent sexual assault. He recounted a recent visit to South Africa:

... It's going to take fossil fuels to push power out into those villages in Africa, where a young girl told me to my face, 'one of the reasons that electricity is so important to me is not only because I'm not going to have to try to read by the light of a fire and have those fumes literally killing people.' But also from the standpoint of sexual assault. When the lights are on, when you have light that shines, the righteousness, if you will, on those types of acts. So from the standpoint of how you really affect people's lives, fossil fuels is going to play a role in that.

But, in reality, "the righteousness" of a "light that shines," in Perry's invocation of the Bible, doesn't reduce sexual assault. According to a study at University College London that assessed 63 cities over 14 years, darker locations did not translate to an increase in sexual assaults.

And even if he was right about the need for light, fossil fuels aren't the only source of energy that can power electricity, either. Renewable energy sources, such as solar power and wind, can provide an alternative to sources that cause climate change. Since 2015, the African Union has been working on pouring billions of dollars into renewable energy.

Aside from the fact that electricity has no impact on preventing this behavior, Perry's remarks were a crass justification for fossil fuels in the face of a critique about climate change and how the Trump administration's policies could damage the earth. Sexual harassment and assault are the result of a culture where women's bodies are treated as public domain and where toxic masculinity rules, not because there aren't enough lights on.

In response, a spokeswoman for the Department said Perry was inspired by conversations he had with locals on his trip to Africa. “The secretary was making the important point that while many Americans take electricity for granted there are people in other countries who are impacted by their lack of electricity,” Shaylyn Hynes said in a statement to The Hill.

Perry's fossil fuel push, however illogical in the moment, was on par with the Trump administration's policies. Throughout the campaign and since taking office, President Donald Trump has pledged to bring back coal. Early into his time in office, the president rolled back Obama-era regulations on the industry, as well as climate change policies.

Other decisions and appointments have also pointed to the administration's unwillingness to address climate change. In July, Trump decided that the U.S. would withdraw from the Paris Agreement, a global accord to combat climate change. Scott Pruitt, the Environmental Protection Agency (EPA)'s administrator, in fact built his career on suing the EPA before Trump nominated him to lead it, according to The New York Times.

Perry, who was previously the governor of Texas and a presidential candidate, has a history of making harebrained remarks about the issue.

In June, he told CNBC that he didn't believe that man-made carbon dioxide emissions were behind global climate change, and at the same Axios event, he said that "the science is out on whether humans cause 100 percent" of climate change. (Scientific experts overwhelmingly agree that climate change is caused by human activities.)

Of course, the Trump administration doesn't exactly have a good track record — or a track record, at all — on addressing sexual misconduct. In September, Education Secretary Betsy DeVos announced that she would revise campus sexual harassment and assault guidelines to better protect the accused, rather than focusing on efforts to help survivors.

Considering that Perry works for a president accused of sexual misconduct himself — and White House Press Secretary Sarah Huckabee Sanders recently said the accusers were "lying" — it's hard to believe an administrator's interest in fossil fuels is sincerely for the prevention of assault.

Perry should really stick to what he knows. Then again, if he did that he might not have a job.