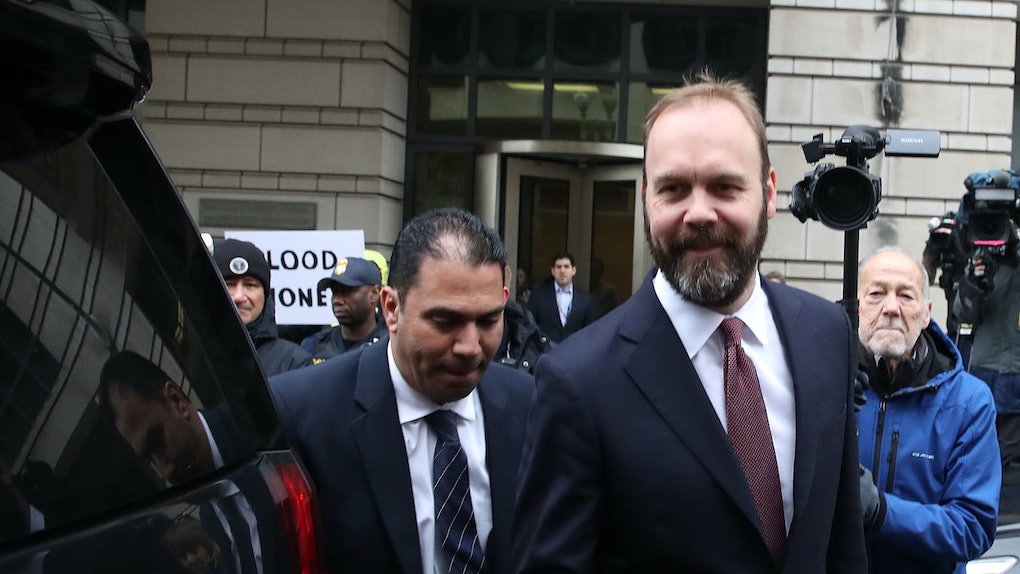 Rick Gates Reportedly Talked To A Russian Linked To Spies During The Election, So That's Cool

It's another day, and there's another wrinkle in the Russia probe. The tendrils of the special counsel's investigation of Russian interference in the 2016 presidential election stretched ever further on Tuesday, March 27, after a court filing revealed that a top Trump campaign official allegedly had contact with Russian intelligence. That official, former deputy campaign chairman Rick Gates, reportedly talked to a Russian linked to spies in the weeks before Election Day.

The details emerged in a court filing pertaining to Alex van der Zwaan, a Dutch attorney who pleaded guilty on Feb. 20 to lying to special counsel Robert Mueller's investigators about contact allegedly Gates had with an unnamed Russian, referred to as "Person A." Emails and recorded phone calls obtained by special counsel indicated that van der Zwaan, Gates, and "Person A" had all allegedly been in contact in September and October 2016, which is what van der Zwaan pleaded guilty to lying about. Elite Daily has reached out to an attorney for Gates for comment on the allegation that Gates was in communication with a person he knew to have ties to Russian intelligence, but did not hear back at time of publication.

The court documents say that van der Zwaan claimed to investigators that Gates allegedly knew that "Person A" had ties to Russian spies at the time they were communicating. That Gates and "Person A" were allegedly directly communicating is "pertinent to the investigation," per Mueller's court filing, which is why the Gates news is potentially significant.

"During his first interview with the Special Counsel’s Office, van der Zwaan admitted that he knew of that connection," the document states.

Specifically, van der Zwaan alleged that Gates knew "Person A" was a former officer with the Main Intelligence Directorate (GRU), which is Russia's foreign military intelligence agency. But federal investigators believe that "'Person A' has ties to a Russian intelligence service and had such ties in 2016," according to the court documents.

According to The New York Times, the document describes "Person A" as someone who allegedly worked for Gates and Paul Manafort, then-President Donald Trump’s campaign chairman. Their relationship reportedly involved campaign-lobbying efforts in Kiev on behalf of the former pro-Russian president of Ukraine.

Manafort and Gates were given updated charges in February.

In February, Manafort and Gates were given updated charges by the special counsel, according to CNN, which detailed that the two allegedly laundered $30 million, failed to pay taxes for nearly 10 years, and used real estate they owned to get more than $20 million in loans. Manafort's spokesman, Jason Maloni, told CNN in a statement that Manafort is innocent and that "he will be acquitted of all charges."

"The new allegations against Mr. Manafort, once again, have nothing to do with Russia and 2016 election interference/collusion," Maloni said. "Mr. Manafort is confident that he will be acquitted and violations of his constitutional rights will be remedied."

Gates initially pleaded not guilty to the charges against him in February, and last month began cooperating with special counsel.

OK, yeah. Russian spies. What does that mean?

Like with so much of the Russia investigation, it has been challenging to pinpoint which details are significant. Mueller's indictments and court filings are reportedly carefully placed, and something of a tactic to apply pressure to witnesses or given them incentive to talk.

The details about Gates' alleged contact with Russian intelligence is the latest detail to be sussed out in the court paperwork, but Mueller's goal may have been achieved by the time Gates pleaded guilty and began cooperating last month.

Gates pleaded to one count of conspiracy against the U.S. and one count of making false statements to the Federal Bureau of Investigation (FBI) in February. In exchange, charges related to money laundering, acting as an unregistered foreign agent, and making other false statements were dropped, per his plea deal.

In a statement to Times reporter Maggie Haberman, Manafort responded to news of Gates' switch on Feb. 23 by saying he would maintain his innocence:

Notwithstanding that Rick Gates pled today, I continue to maintain my innocence. I had hoped and expected my business colleague would have had the strength to continue the battle to prove our innocence. For reasons yet to surface, he chose to do otherwise. This does not alter my commitment to defend myself against the untrue piled up charges contained in the indictments against me.

The tension between Gates and Manafort is what likely interests Mueller, according to a Politico report, for the information it might force public related to Mueller's Russia probe. “He saw everything,” a Republican consultant who worked with Gates during the campaign told Politico. The consultant referred to Gates as a "top five" insider whom Mueller could have flipped.

Even with the hefty amount of paperwork and published court reports, it still is unclear what this means for the Trump administration.

“The White House has repeatedly declined to comment on the Manafort and Gates matter as it has nothing to do with the White House or the campaign,” White House lawyer Ty Cobb said in response to the updated February indictments.