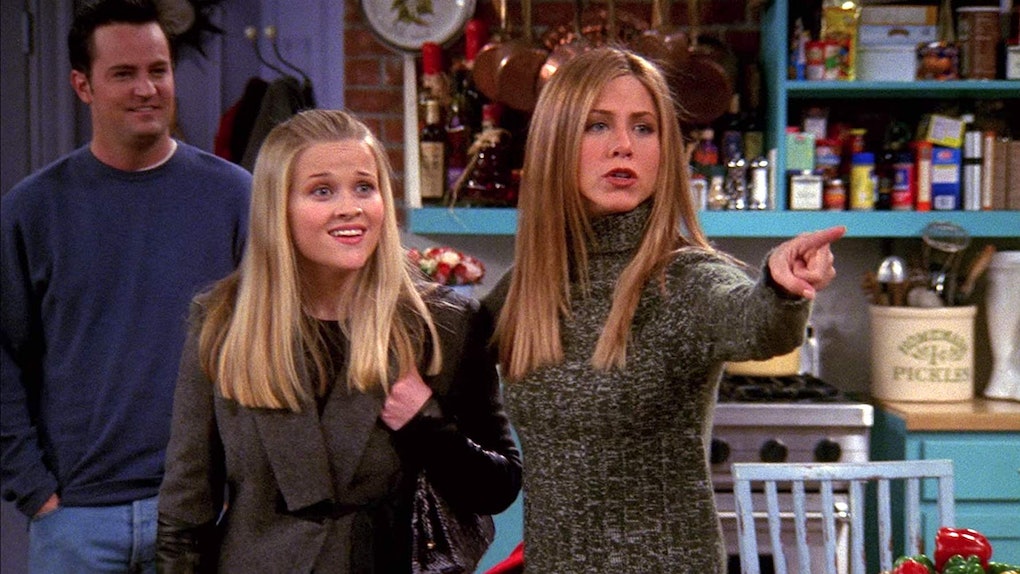 Fans of Friends will remember when Reese Witherspoon guest starred as Rachel's sister, Jill, on two episodes in 2000. If you've ever wondered why Witherspoon only appeared for two episodes and was never seen on the show again, you aren't alone. But now, 25 years later, Witherspoon is revealing why Jill disappeared. Apparently, Reese Witherspoon turned down reprising her Friends role when she was offered a chance to return to the series.

In an interview with The Associated Press, Witherspoon revealed she voluntarily turned down a reprise of her role as Rachel Green's sister on Friends years ago. Witherspoon and Jennifer Aniston were busy promoting their new series, The Morning Show — a web television series on Apple TV+ that made its premiere on Nov. 1 — when Witherspoon dropped the bomb that she could have reprised the role, as she was asked to come back, but chose not to.

The clip starts with a discussion of live audiences, to which Witherspoon says of Aniston, "She's so good in front of a live audience." Although Witherspoon doesn't seem to think that she is as good as Aniston is on this front, many Friends viewers were thrilled that Witherspoon guest-starred. Aniston replied, also praising Witherspoon on her talent, saying, "You are, too. You forget it because you blacked out... from fear."

This open conversation revealed that Witherspoon, an Academy Award-Winning actor, is afraid of acting in front of live audiences. "I've never done it again," she said, then turning to Aniston and to ask, "Did you know they asked me back [on Friends] and I said, 'I can't do it'? I was too scared."

Aniston's reaction begins with, "How dare... " as she is saddened that she could have had Witherspoon come back to the show.

Witherspoon's decision went on to affect Rachel Green's family life in a pretty major way. Aniston's character was reportedly not supposed to have two sisters originally, but since Witherspoon declined coming back, the writers created another sister role, which was played by Christina Applegate. Whatever the case, fans were glad to see Applegate on the show, as another great guest-starring character on Friends.

Thankfully, now everyone who loved Witherspoon and Aniston's dynamic on Friends now has a new show to enjoy. The duo currently co-star on Apple TV+ The Morning Show as frenemy news reporters dealing with sticky situations on their morning talk show.

If you loved Witherspoon and Aniston's on-screen chemistry, then you'll want to catch The Morning Show on Apple TV+ ASAP. Even though you didn't get much of the duo on Friends, you can still watch these two amazing women act together.