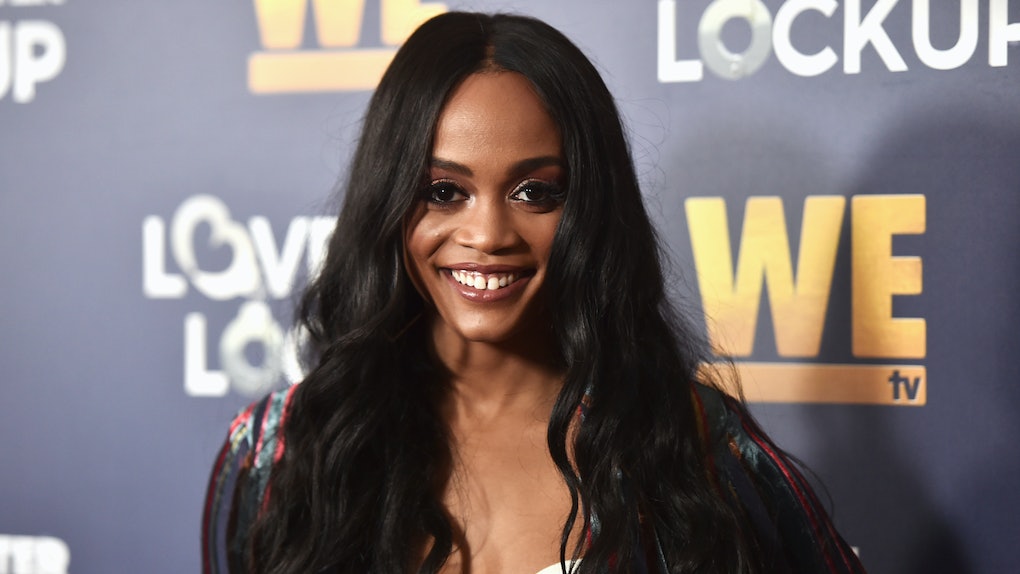 I've never been to the Bachelor Mansion, but I can only imagine that when the ladies are there for a Bachelor season, it's a haven of face masks, nail polish, and emotional venting. Viewers know that the confined, heightened experience of being on The Bachelor is tough, but making that transition from contestant to a leading lady suddenly on a quest to find her future husband is even more stressful. Season 13 Bachelorette Rachel Lindsay's quotes about the stress of The Bachelor will bring you a whole new appreciation for what Rachel, Colton Underwood, and other franchise leads have been through.

Ahead of hosting an event with Vaseline in Dallas, Rachel spoke with Elite Daily about how self-care routines played a role in her stints as a contestant on Nick Viall's Bachelor season and then the first black Bachelorette. ABC can't resist a Bachelor date resembling a Pretty Woman-esque makeover, but for Rachel, it only took living with the other women to learn a thing or two about taking care of herself.

"When I came on the show, I really was so clueless as far as self care and makeup and beauty," she says. "I was fascinated by all the girls in the house and I picked up tips from them. But I walked in the house only doing what was natural to me before the show. I grew up using Vaseline petroleum jelly and that was truly my beauty routine... After the show, of course I continued with what was natural to me because it’s worked for me all these years, but in addition, I started doing things like face masks."

Without her friends' constant presence and support while filming The Bachelorette, Rachel had to rely on more introspective methods to refresh. "You have to find some me time," she says, advising a new Bachelorette to carve out time to take care of her body and mind. "It is work. We’re working like 17, 18, 19 hour days."

Amidst that busy Bachelorette schedule, Rachel's go-to debriefing involved watching movies and writing in her journal during plane rides to new destinations. "I always watched love movies, I was such a sap during the show," she jokes. "But you have to take time for yourself, know what helps you relieve from stress, and and do that as much as possible."

Of course, the pressure of filming the show is a completely different feat compared to living in its aftermath. Although Rachel is currently planning her summer wedding to Final Rose recipient Bryan Abasolo, the end of her 2017 season ignited upset among viewers when she tearfully broke up with runner-up and fan favorite Peter Kraus. An unpopular ending plus the adjustment to post-Bachelor life can be detrimental for some couples, and if his fence jump foreshadows anything, it's that Colton's current season seems destined for another controversial, stressful ending.

"The stress is so much on you once you put yourself into Bachelor Nation because all of America is watching at this point," Rachel says about the show's relationships. "All eyes are on you, so it’s one thing to be navigating a relationship and the emotional stress that that can have just in general. Now everybody’s watching you and you have that pressure. And if they’re watching you, then they’re also giving you their opinion, so that adds even more stress on top of it."

Rachel is well on her way to her own happy ending, but with Colton's now seeming so distant, she has some advice for the former NFL star as his season winds down.

"You have to trust in the decision that you made, not listen to the outside noise, and you really have to protect the relationship that you have because people will come at him and they will come at her and so you have to hold on tight to each other," Rachel shares. "As soon as the finale is over, you gotta step away from the camera... that’s a decision that Bryan and I made. We didn’t do another reality TV show, we protected what we had, we built a foundation, and we surrounded ourselves with people that we love and that were incremental to our relationship."

Bachelor Nation is holding its breath after Colton ditched cameras following his frontrunner's teary goodbye, but here's hoping he takes some of Rachel's words of wisdom to heart ahead of the finale.