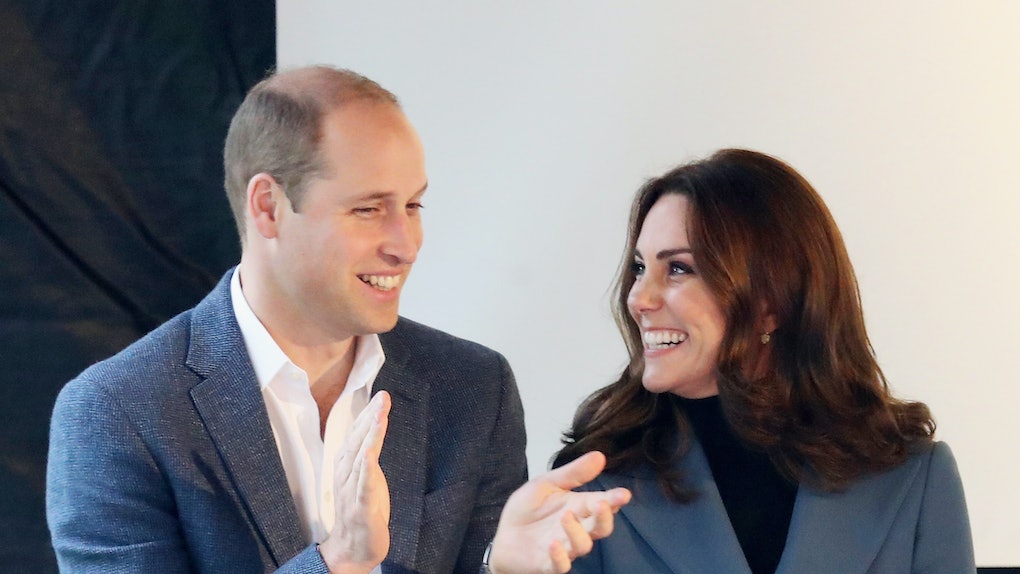 The world's obsession with British royalty never made sense to me for the longest time. As far as I was concerned, they were just rich folks who lived across the pond and wore fancy hats. But then, I watched The Crown and everything changed. Yep, I caught royals fever bad. Now, I totally get the desire for a peek behind the Buckingham curtain, especially at the dynamics of the couples currently residing there. While Prince Harry and Megan Markle are pretty openly affectionate, Prince William and Kate Middleton's body language is a bit trickier to read. That's because their role demands they be more professional and less overtly affectionate in public. To break down their dynamic, I enlisted the help of Patti Wood, author of Snap: Making the Most of First Impressions, Body Language, and Charisma, to help decode the subtle clues about William and Kate's relationship that the two are giving off without even realizing it.

You may think that the couple’s tradition of not showing any PDA might hinder Wood's read on the duo, but in fact, it actually helps to illuminate the degree of connection between them: "Whenever I’m doing a read, I want the baseline to know what’s normal and that actually informs my read," says Wood. "I look at their norm, and typically, they are not touching each other. They’re not standing super close, so we're already looking at anomalies that are different from their baseline, so that makes what they're doing even more significant."

So what do these anomalies tell us about William and Kate? Here's what Wood sees.

1. They Are Affectionate In Private And Laugh Together Often

To decipher the above image, Wood starts at the bottom and works her way up, beginning with the Kate’s hand. “One of the things that’s significant there is … that her fingers and the way that she is holding her hands is actually holding a lot of tension. If you look at the veins and the way the fingers are curled, it’s very awkward and tension-filled instead of having the hands relaxed out,” says Wood. “What I believe that indicates is that she would normally reach for him and she’s stopping herself. And there is a lot of tension in her hand to stop that reach and touch.”

Further evidence of the couple’s closeness here is what Wood calls “overlap,” which is they way that William's arm is just slightly over Kate's, creating a slight overlap in their bodies. “The reason that’s significant is … overlap is a way to show that couples are unified — that they want to be seen as one, [and] that they are connected,” she says.

2. They Have A Passionate Love Connection

This second image offers hints about the couple’s romantic connection. According to Wood, if you want to know how people feel, just look to the angle of their hips. ”If you look at him on the left, see how his body — the lower torso body and then the belly — [is] slightly angled toward her, and her pelvis is slightly angled toward him … that’s called the 'love V,'" says Wood. “It shows a love connection and that’s really, really nice.”

In this last image, Wood sees a couple who form a united team. Despite being separated by seats, they both make efforts to close the gap between them and create a sense of intimacy. “I do like how his leg is crossed toward her, rather than away from her, that includes in and blocks other people out — especially how high the knee is up and over," says Wood. “His hand out over the leg like that — that’s another block to the outside world ... And we can’t see her touch on his arm, but we can see that he’s going in toward it, and the touch is making him happy.” Basically, what all of this says to Wood is, “Let us have our little moment. I’m with her and I’m excluding you out.”

So what’s Wood’s overall assessment of this couple’s dynamic? Well, it appears to be a real love story: “It’s clear that they have a very healthy connection with one another — that publicly they laugh and share intimate moments — and it’s an indication that they do that quite often," she says. "The matching and mirroring specifically shows that they do it quite often because, over time, if you love your partner, you match and mirror.”

Here's to hoping Meghan and Harry build the same strong love connection as Will and Kate clearly have.

More like this
Why Did Jennifer Lopez & Alex Rodriguez Break Up? She Dropped A Hint On Instagram
By Candice Jalili
6 Zodiac Sign Pairings Best Suited For Relationships
By Rachel Shatto
Travis Barker's Birthday Instagram For Kourtney Kardashian Was So Extra
By Lydia Wang
Stay up to date