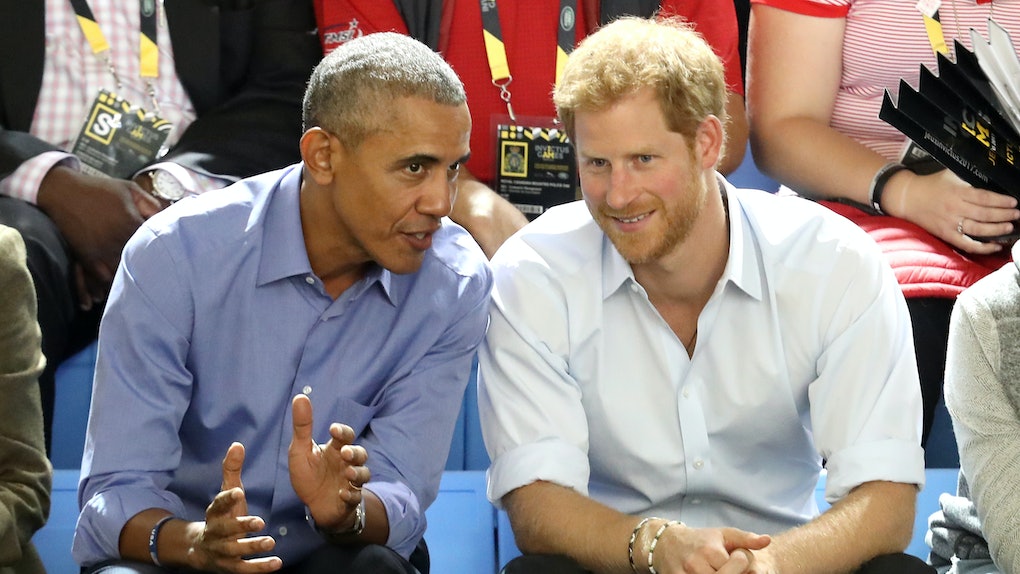 In a wide-ranging conversation that is quickly making headlines, Prince Harry interviewed former President Barack Obama, and the conversation featured some true gems. While the prince and the former POTUS touched on subjects that concern the future, one of the most notable highlights from the pair's conversation came when Obama talked about former First Lady Michelle Obama. The former president's mention of his wife came after Prince Harry asked him to explain the "game face" he had on while sitting at President Donald Trump's inauguration.

"The first thing that went through my mind was sitting across from Michelle, how thankful I was that she had been my partner through that whole process," Obama said.

Prince Harry's interview with the former president aired on Wednesday, Dec. 26, by Britain's BBC Radio 4. Prince Harry was the guest editor for an episode of the outlet's Today show, which also featured the prince interviewing his father, Prince Charles, as well as other guests.

While the interview between the two internationally recognized figures has only been released just before the new year, the actual conversation took place three months ago in Toronto, where Prince Harry and Obama met at the Invictus Games in September.

During their conversation, Obama didn't mentioned President Trump by name, but he did discuss the issues that concern him even after exiting the White House.

"I still care about making sure that the United States and the world is a place where kids get a decent education," Obama said. "Where people who are willing to work hard are able to find a job that pays a living wage. That we’re conserving the amazing resources of our planet so that future generations can enjoy the beauty of this place. Like we did."

Prince Harry only met former President Obama in London in 2016, but the two appear to have bonded over different issues ever since. It's no surprise, then, that Prince Harry visited Chicago in late October to join the Obamas at their leadership summit, which came one month after the prince and the former president sat down in Toronto.

The subject of leadership also came up during the interview that aired on Wednesday, and former President Obama discussed the subject while also talking about the nature of conversations online.

"All of us in leadership have to find ways to recreate a common space on the internet," Obama said. "One of the dangers of the internet is people can have entirely different realities. They can be just cocooned in information that reinforces their current biases."

Obama also stressed the importance of finding a way to "make sure that online communities do not just stay online, but move offline," which is a point which he has expressed in past interviews as well.

"The truth is, on the internet everything is simplified, but when you meet people face to face it turns out it is complicated," Obama told Prince Harry.

Despite the two's apparent friendship, the question of whether Obama will be invited to Prince Harry's wedding is still unanswered. A report from British tabloid The Sun said that Prince Harry had been urged to not invite the former president for the sake of the government's relationship with President Trump.

Regardless of how much truth there is to The Sun's reporting, one thing's for certain, Prince Harry didn't exactly put the subject to bed on Wednesday.

"Well, I don’t know about that" Harry said on BBC Radio 4. "We haven’t put the invites or the guest list together yet so who knows whether he’s going to be invited or not. I wouldn’t want to ruin that surprise."

Way to keep everyone in suspense, Harry.