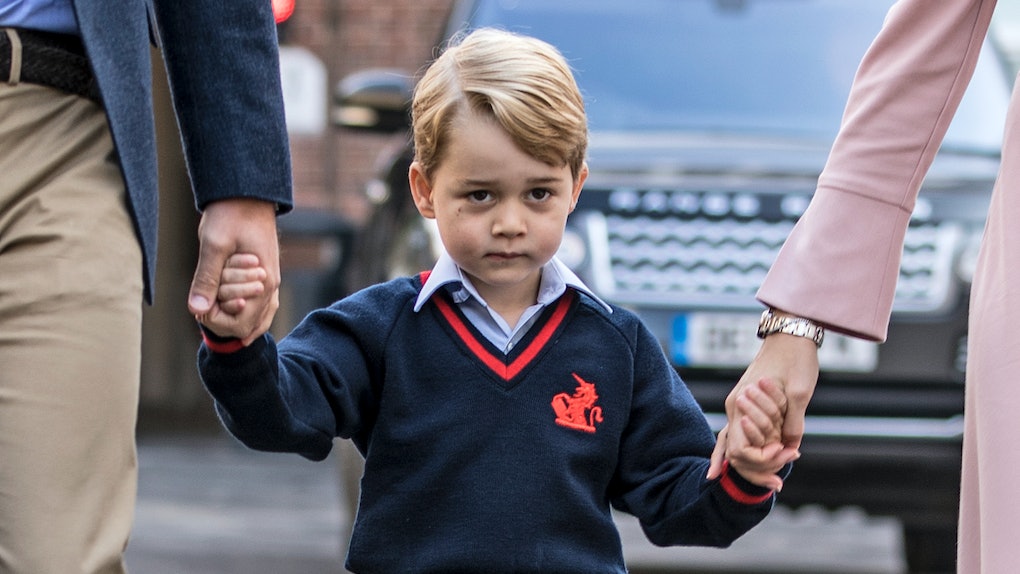 Prince George's Nickname Is As Random As It Is Adorable, According To Reports

Um, is Prince George a closet Riverdale fan? It kind of seems like it. Because when the little guy struck up a convo with a stranger recently, he didn't introduce himself as George. I mean, what fun would that be, right? Instead, the precocious prince offered up a name straight off the hit CW show and, like, well done, sir! Prince George's nickname is apparently Archie, you guys! And much like Betty's ponytail, it's totally iconic and beyond reproach. Elite Daily reached out to Kensington Palace for confirmation of the reported nickname, but they declined to comment.

OK, so here's what happened. Prince George and Princess Charlotte were reportedly out walking in Berkshire with their grandmother, Carole Middleton, when the 5-year-old approached a dog walker.

"Just to be friendly I engaged in a bit of small talk and I asked George what his name was, even though obviously I knew it," she told The Sun. "To my astonishment he said 'I’m called Archie' with a big smile on his face. I don’t know why he calls himself Archie but kids often play with their names and I think it’s lovely."

Same. I mean, I'm a huge Riverdale fan so I'm totally here for the whole Prince Archie thing. They even kind of look alike, you know? And if you're still not convinced that George is a fan of the series, consider the fact that he also reportedly has a Riverdale-themed nickname for his dad!

That's right, you guys — he apparently calls Prince William "Pops." See, when the Duke and Duchess of Cambridge were visiting Leicester back in Nov. 2018, the crowd started asking questions about the kiddos, and that's when Kate Middleton revealed the reported nickname.

Here's what a fan told People at the time:

So freaking cute! And I get that there are probably a ton of kids who call their fathers "Pops." But it can't be a coincidence that the name of the diner where Archie Andrews et al hang out is named Pop's Chock'lit Shoppe, can it?

And let's not forget that the diner was formerly owned and now managed by a man named Pop Tate, who is 1) a recurring character on the show and 2) an eyewitness to the shooting of Archie's dad Fred.

It's all coming together now, isn't it?

Just please, please tell me that George calls Princess Charlotte Cheryl Blossom, because OMG that would seriously make me so happy. I mean, if this isn't already a thing we need to make it happen ASAP.

Even if the name Archie turns out not to be Riverdale related (because I guess there is a slight possibility there's no connection... maybe), I'm just really here for the fact that Prince George either just re-branded himself or shadily gave a fake name to a fan. I mean, we've all done it at Starbucks, right? So if twisting the truth a bit is what it takes for a five-year-old royal to be able to pet a random dog in peace then you do you, Archikins.

More like this
'He's All That': Premiere Date, Cast, Trailer, Filming News, & More
By Dylan Kickham
Which Album Will Taylor Swift Re-Release Next? Her Hints Have Fans Shaking
By Brandy Robidoux
Colton Underwood Is Reportedly Making A Netflix Show After Coming Out As Gay
By Dylan Kickham
Stay up to date