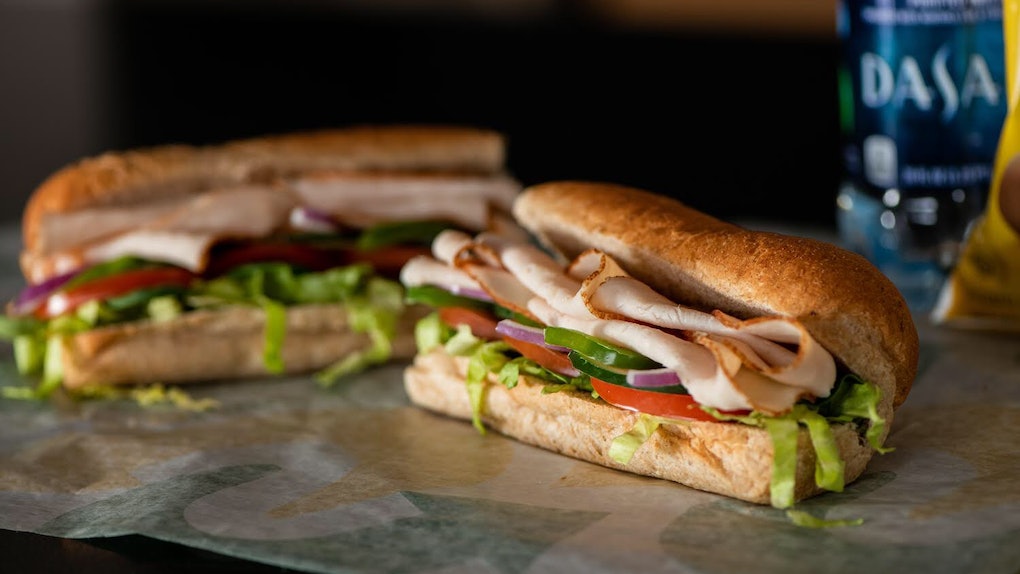 Postmates' April 2019 Subway Deal Gives You $5 Off A Footlong, So Order Away

Let's face it — there's nothing in the world quite like getting a meal you've been craving all day delivered via Postmates straight to your door. You don't have to change your clothes; you don't have to try to find your car keys; and you don't even have to turn on the oven. As April comes to an end, delivery app Postmates is fitting one more deal in for sub lovers, and Postmates' April 2019 Subway deal will help satisfy all your Footlong cravings.

Postmates is partnering up with Subway to offer customers nationwide $5 off a Subway Footlong. The deal began on April 23 and runs through April 28, 2019, so you still have some time to take advantage of it. To redeem, use the promo code "SUBTIME" to get the discount on any order of $10 or more.

The promotion is in celebration of 1,000 cities added to Postmates' servicing area, hiking the number of cities people can use Postmates up to 3,500, according to the company's blog post. Some of the new additions include Pensacola, Florida; Santa Cruz, California; Jacksonville, North Carolina; San Luis Obispo, California; Lawrence, Kansas; and Stillwater, Oklahoma. Postmates says it now services 70 percent of U.S. households, so there's a good chance you can get a sub delivered to you ASAP. Not sure if Postmates services your area? Head to the Postmates website and plug in your address to see if Postmates can deliver to your area.

Bastian Lehmann, co-founder and CEO of Postmates said in a blog post announcing the news that the expansion allows Postmates to deliver anything "on demand" in all 50 states. Lehmann added, "Now more than 70 [percent] of U.S. households can take advantage of our industry-leading merchant selection and our innovative products like Postmates Party." Postmates Party is a new feature that was introduced in March 2019, and it allows users to order from popular restaurants with no delivery fee.

Postmates introduced its partnership with Subway in a blog post on October 12, 2018. Postmates noted that at the time, the company had delivered 43 miles of subs from Subway restaurants, adding that 43 miles is equal to 221,000 pounds of sandwhich, which is equal to five and a half football fields, which is equal to three times the length of Manhattan.

Not quite sure what to get when you order Subway on Postmates? Allow me to suggest Subway's new Club Collection which the company introduced on April 25, 2019. The Club Collection nixes tradition club ingredients like turkey, bacon, and lettuce and integrates interesting new ingredients like like guacamole, jalapeño, and chipotle sauce, with sandwich options for everyone.

Subway's Club Collection includes three new sandwiches: the Southwest Inspired Chipotle Chicken Club, the Steak Club, and the American Club. The Southwest Club includes Tex-Mex ingredients like Pepper Jack cheese, lettuce, tomatoes, green peppers, red onions, Chipotle Southwest sauce, and guacamole, and it is assembled on Jalapeño Cheddar bread with chicken strips and bacon. The Steak Club has fewer ingredients — steak, turkey, bacon, American cheese, lettuce, tomatoes and mayonnaise — but it packs just as much flavor. The third sandwich, The American Club, has many of the same ingredients as the Steak Club with a few tweaks like Black Forest ham instead of steak and is served on flatbread rather than freshly-baked bread.

Whether you order a new sandwich from Subway's Club Collection or stick to one of your classic faves, you're sure to enjoy the $5 discount on your Postmates order.