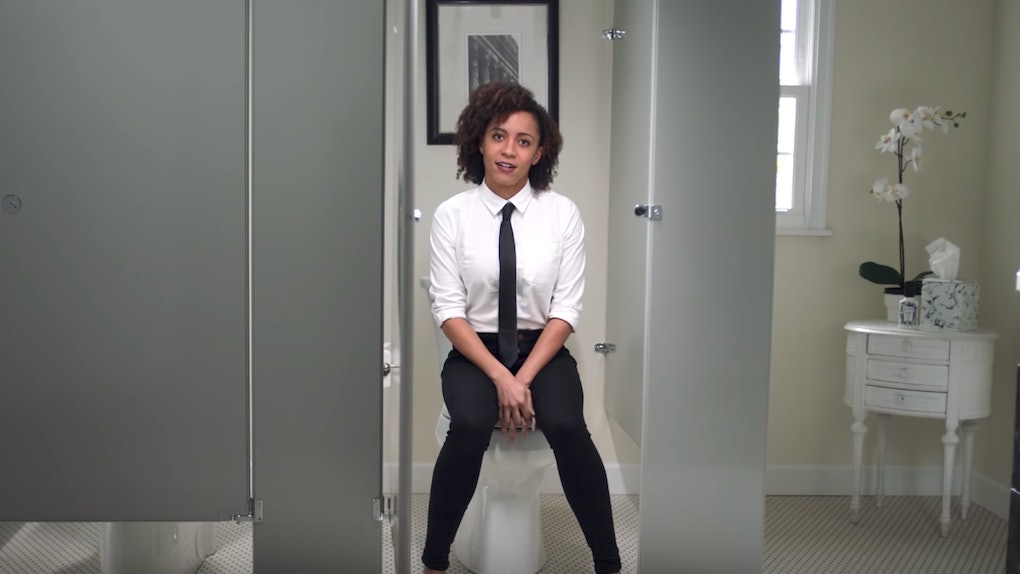 Everybody poops, drops a deuce, takes a sh*t, dumps, toots — however you refer to it, bowels are a natural, human movement. So why, then, are men comfortable talking crap, yet there’s a stigma surrounding women's bathroom business? There should be no shame in sharting, farting, and especially going number two when you have to, and that’s exactly why fragrant toilet spray brand Poo~Pourri launched its #GirlsDoPoop campaign: to encourage women to dump (see what they did there?) any shame they might have about their bathroom habits. After all, pooping is totally natural, girl, and no one should ever feel like they have to hold it in. Plus, not only is it ridiculous for men to think of women as human beings that walk the walk, talk the talk, but don’t do more than tinkle in the bathroom, it’s also pretty unhealthy to abstain from pooping in public to appease this facade.

Listen, take it from someone who’s been dealing with irritable bowel syndrome (IBS) all her life: When you have to go, you have to go. But according to data collected by Poo~Pourri, which the brand sent to Elite Daily over email, 41 percent of women are uncomfortable pooping in public, while an equally as concerning 38 percent of women aren’t comfortable pooping at work. Seeing as how numbers don’t lie, I’d say it’s pretty obvious that now, more than ever before, ladies, you and I need to talk our sh*t and beat the stigma; otherwise, two things are bound to happen: You’ll be forever anxious to let it go when you really have to go, and worse, this could result in your bowels building up and wreaking havoc on your gut.

The campaign kicked off on Sept. 27, 2018 when the brand uploaded an original, spoken word piece, written and performed by poet and activist Andrea Gibson, to its YouTube channel. Gibson sets the scene by sitting on a toilet, speaking her truth and yours when she rhymes, “It’s society’s dupe that girls don’t poop/that’s constipation of the mind/that kind of thinking is behind, besides/pooping is only natural.” The video clearly resonated with people, as it's received over 1.4 million views to date. To continue the conversation, Poo~Pourri has since posted six more stories of women speaking their sh*tty truths that are both hilarious, and hella relatable.

For instance, one woman named Maryann told a story about the first time she met her now-husband’s parents over Thanksgiving weekend. Unfortunately for her, Maryann was enduring a monstrous stomach bug. To make her feel more comfortable, Maryann explained in her Poo~Pourri video that her mother-in-law insisted she sleep in her bed, as it was much closer to the bathroom. However, in the middle of the night, Maryann let out what she thought was a fart, and it actually ended up being a shart. Obviously not the best first impression, but hey, sh*t happens!

Another woman named Kelley admitted to overestimating how much Mexican food she could stomach on a day at the office (ugh, been there). On her way up to a private bathroom stall, she explained, she realized she couldn’t hold her beans all the way to the bathroom, so instead, she spilled them. Translation: She pooped her pants in an elevator. She handled the situation like a true pooping problem solver, though, as she said she waddled to the ladies' room, disposed of her soiled underwear, and popped by the nearest drugstore for a new pair. Adulting is quite the experience, isn't it?

But my personal favorite poop story came from Leah, a catering waitress working a gig crowded with secret service agents. In her Poo~Pourri video, she explained she’d worked late the night before, and despite her sensitivity to all things “meat, dairy, gluten, and caffeine,” she decided to down a large cup of coffee to help herself wake up. The caffeine definitely worked its magic, in more ways than one: Leah’s energy levels were high, but she noticed a lot of discomfort down below. Long story short, since she literally darted out of the event to make a beeline for the bathroom, a secret agent found her behavior suspicious and followed her to the restroom, where she listened to what Leah described as the "massacre" of a veggie poo. If you're reading this, I know the feeling, Leah — veg poo is the pits.

These stories are obviously hysterical, but it’s important to note that, while these women weren't exactly pooping under the most ideal circumstances, the bottom line is that they went. No matter how embarrassing or downright horrifying the situation, these women did their business, regardless of their surroundings, simply because that's what their bodies had to do.

The health concerns of holding your poop in, however, aren’t quite as hilarious as these videos. In fact, not going to the bathroom can be really detrimental to your gut. “In general, women tend to think ‘poop’ is something that is unladylike or ‘unclean’ and prefer to avoid having a bowel movement in public,” Erin Palinski-Wade, RD, CDE, a consultant for Swisse Wellness, tells Elite Daily. The problem is, she explains, when you hold it in, backed up stools can cause “bloat, gas pain, and chronic constipation,” and if it the stool is held in for too long, “it can harden, making it more difficult to pass, which can increase the risk of hemorrhoids.” In other words, when all signs point to poop, if it’s time to go, listen to your body and get to a bathroom.

Of course, there are going to be (unfortunate) moments in life when maybe you can’t hold it in, and you end up pooping in your pants, or sharting over your in-law’s sheets. It really does happen to the best of us, but the best way to fight the stigma, Dr. Alyson Pidich of The Ash Center tells Elite Daily, is to “talk openly about bowel movements with your fellow women, co-workers, [and] family,” because it’s a friendly reminder that “every human being on the planet poops.”

Women across social media, including Real Housewives of Orange County’s Tamra Judge and Netflix’s Nailed It host Nicole Byer, are already sharing their #GirlsDoPoop stories, and you can, too. Share your story using the hashtag, and don't be shy to strike up a conversation with a friend about that one time you really, really had to go. Remember, everybody poops, and it's more than OK to talk sh*t from time to time.