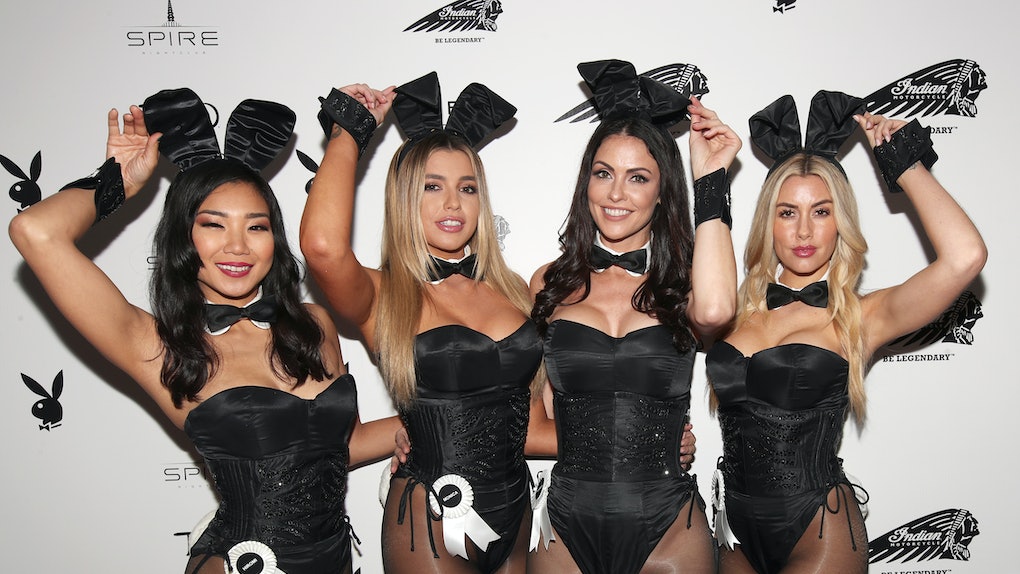 As if 2018 couldn't get any weirder, the weirdest event of the season is quickly approaching — the White House Correspondents' Dinner. Again, it appears, President Donald Trump will not attend, but there's a brand involved this year that you might not expect to be partaking. Playboy's White House Correspondents' Dinner party is a bold move... although it probably won't even crack the strangest stories of the week.

Typically, during the weekend of the dinner, D.C. lights up with various parties, and Playboy is joining that scheduling this year. Playboy is in the process of reinventing itself — which, in the wake of #MeToo, is not such a surprising move — and the party appears to be a part of that. Cooper Hefner, Hugh's son and now the chief creative officer of the company, told The Washington Post that the April 28 party for the White House Correspondents' Dinner would be a return to the principles on which the magazine was founded.

“The brand has always been a passionate fighter for the First Amendment and the freedom of the press,” Hefner told the Post, adding that, “There is a very interesting climate in D.C. right now. You can’t ignore what’s happening right now, even for a brand like us.”

Coinciding with Playboy's debut at the annual event, this is the first year that the magazine has had a White House correspondent (i.e. a reporter in the White House). Yes. You read that right. Playboy has been covering the White House.

In fact, Playboy's correspondent Brian Karem appeared in a viral video last year as he defended a CNN reporter in the White House press room and accused Sanders of using inflammatory language to goad the press. Sanders smirked and responded calmly, “I think if anything has been inflamed, it’s the dishonesty that often takes place by the news media."

Karem and Playboy CEO Ben Kohn, among others, will be attending the White House Correspondents' Dinner as the magazine purchased a table, Hefner told The Post. The Post reported that the White House Correspondents’ Association does not comment on its membership, so the dinner's guest list is naturally kept under wraps — but it confirmed that Anthony Scaramucci and Arizona Sen. Jeff Flake were invited to the Playboy after-party.

Playboy also plans to host another event in D.C. after the correspondents’ dinner — the 37th annual Hugh M. Hefner First Amendment Awards will be held at the Newseum in May.

“I’m looking forward to having a cocktail with some folks afterwards,” Hefner told the Post, adding that “when you put up the Bunny Beacon, you have a fascinating group turn out to our parties.”

Unfortunately, it does not look as if President Trump will be interacting with Playboy's White House Correspondents' Dinner planning. CNN reported on Tuesday, April 17, that Trump had scheduled a campaign rally in Michigan during the White House Correspondents' Dinner, but that White House Press Secretary Sarah Huckabee Sanders would attend the dinner. I'm bummed, but at least there remains the possibility of Sanders getting a photo-op with Playboy's people.

Presidents have been attending the annual dinner since 1924. The only other president to have skipped the dinner was Ronald Reagan in 1981, who was then recovering from an assassination attempt. As for other guests, like Hefner sort of alluded to, it's anyone's guess.

Comedian Michelle Wolf is this year's host of the White House Correspondents' Dinner, and she's already laid out some of her plans in an interview with ABC's Jimmy Kimmel, noting that she was relieved Trump wouldn't attend.

"The first thing I thought was like, 'Oh thank God I don't have to hear Trump eat,'" Wolf joked. "You know he doesn't chew with his mouth closed. He's probably like a real smack-y eater and a mouth-breather at the same time."