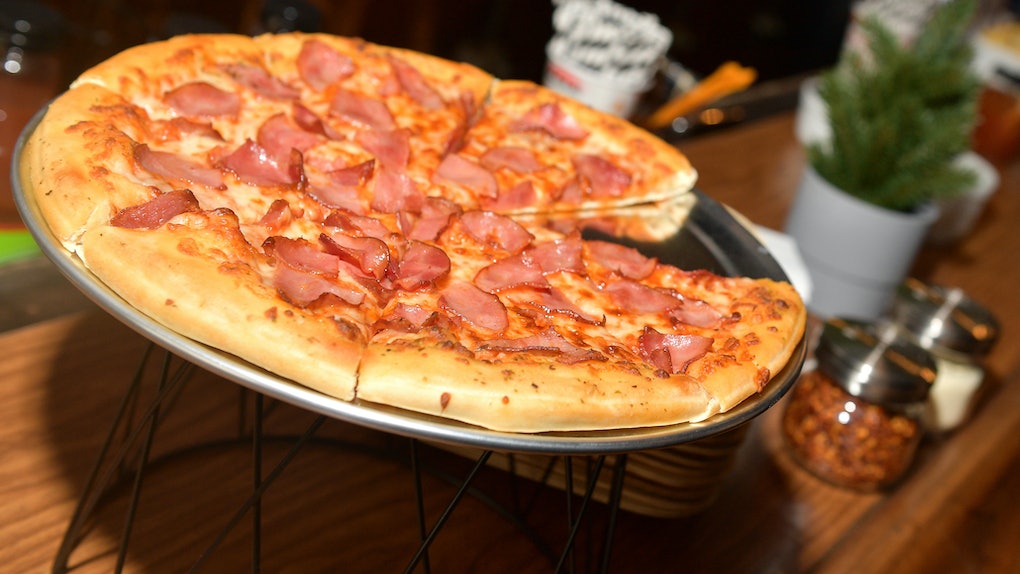 Calling all soon-to-be parents: Pizza Hut is cooking up a delicious deal to celebrate the arrival of your newest addition. Pizza Hut's 2019 Super Bowl deal celebrates the first baby who is born after the kickoff of the big game. As you probably already know, the Super Bowl takes place on Sunday, Feb. 3. The matchup between the New England Patriots and the Los Angeles Rams is set to begin at 6:30 p.m. ET. If you're not currently pregnant, you may want to share the good news with a friend or family member who is about to give birth.

This year, Pizza Hut is offering parents a chance to win free pizza for 365 days and tickets to the 2020 Super Bowl. The contest isn't open to everyone, though. To be considered, you must be a mom or a dad whose child is the first to be born following the 6:30 p.m. ET start of the game, according to Pizza Hut. If you or someone you know meets the quota, then keep reading.

There are just a few simple steps that you, or the parent-to-be, will need to complete in order to enter. Once the baby is born, Pizza Hut requests that the parent snaps a photo of the infant and posts it to Twitter. Make sure to include the exact time the child was born (it has to be after kick-off) and tag Pizza Hut (@Pizza Hut) in the tweet. You'll also need to include the following hashtags for your entry to be valid: #PizzaHutSpecialDelivery and #promotion, according to Pizza Hut. Other terms and conditions may apply, so give the official rules a read before your impending bundle of joy arrives.

“If there’s one thing we’re more passionate about than pizza and football, it’s the family we get to enjoy it with,” Marianne Radley, chief brand officer, Pizza Hut, said in a blog post on the company's website. “Family celebrations and Pizza Hut have gone hand in hand for more than 60 years, so in our first year as the Official Pizza Sponsor at Super Bowl LIII, we wanted to show up for our fans who are in the unique position of expanding their family during the biggest NFL game of the year. And as a mother of four, I would’ve jumped at the idea of free, post-delivery pizza at the hospital."

I can totally relate. My daughter was born on a cold and snowy Saturday in New York just one day before the 2013 Super Bowl. I remember eating a poorly-cooked hospital steak from my bed as we watched the Baltimore Ravens take on the San Francisco 49ers. What I would've done for some Pizza Hut instead of hospital food. (That's another story for a different date.) Oh, and tickets to next year's Super Bowl aren't a bad perk, either. (But, do the tickets come with complimentary babysitting?)

If you're feeling a little left out of this deal, you shouldn't. Pizza Hut is also offering free delivery to select hospitals in Boston and Los Angeles during the 2019 Super Bowl. Whether you'll be staying in the hospital over Super Bowl Sunday or visiting someone who is, might as well spoil them with free pizza delivery.