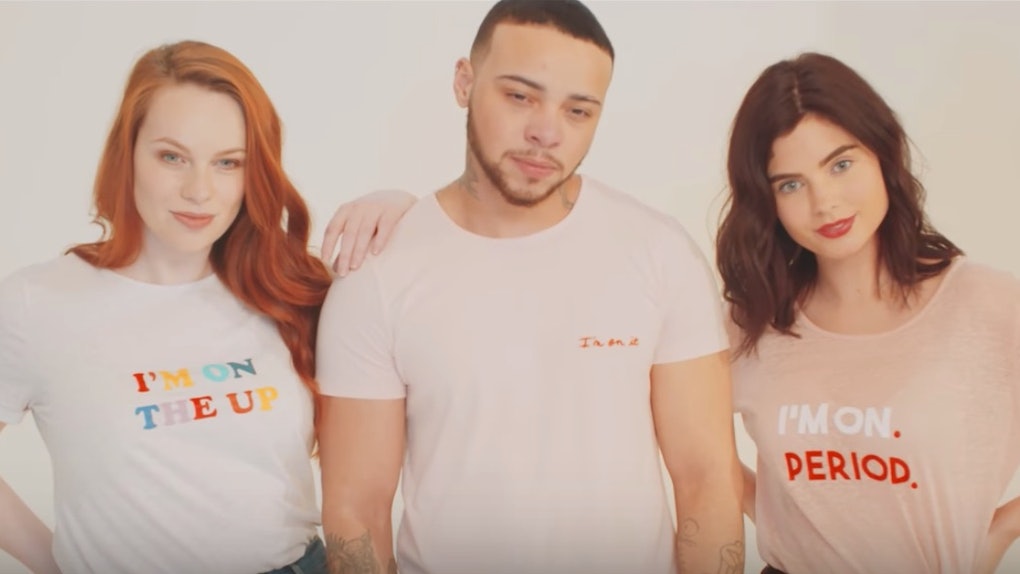 It's 2018, and though society would like to pride itself on being significantly more progressive than it was, say, 20 years ago, there's still a strong stigma surrounding periods, and it's about time the conversation becomes normalized and, more importantly, all-inclusive. UK-based tampon subscription service Pink Parcel’s “I’m On” campaign includes a transgender man, who sheds light on yet another side of menstruation that’s not nearly talked about enough. By now, you've definitely come across social media campaigns and Twitter threads addressing period shaming, and the dire need to cease and desist this behavior, but what often falls to the wayside is addressing how transgender men navigate these same struggles. By teaming up with Kenny Jones, a 23-year-old trans male model, Pink Parcel's campaign has just jump-started the conversation.

For Jones, experiencing his period every month for the past several years of his life has symbolized much more than just the natural course of a female body at work. In an interview with Pink Parcel, Jones explained that having his period as a trans man has been an emotional experience that's offered him a deeper perspective on the relationship he has with his body. When he first bled, he said his body “didn’t understand what was going on,” because even though he was genetically born into a female body, Jones knew, mentally and emotionally, that he was male. He continued,

I didn’t want my period and there was a lot of confusion within myself. It did make me realize that periods weren’t something I wanted to happen to me and it motivated me to further my transition.

Pink Parcel hopes to raise awareness about the stigma surrounding periods, and by including Jones in its campaign, the brand drives the point home that it's not just cisgender women who go through these struggles.

Growing up, you were probably taught that girls, not boys, have menstrual cycles, and that was that. What you likely weren’t taught is that gender is not determined by anatomy, which means, for example, that someone can be born in a genetically female body, but may later grow up to identify as a man. However, assuming things like hormonal therapy or gender reassignment surgery aren't part of his transition, a transgender man will still have a menstrual cycle, and will still deal with the same PMS struggles that any cisgender woman would typically have. This is where the stigma surrounding anyone’s period becomes even more problematic, because not only does society tend to view a woman’s menstrual cycle in a negative light, transgender males bleeding during their transitions are also under scrutiny.

The Independent reports that, before Jones started taking hormone blockers to help him transition into his male identity, he experienced monthly periods, "and many of the negative stereotypes that can come along with it." He explained,

I always found the fact that no one seemed to openly talk about periods quite difficult and made me want to hide mine even more. That’s why I wanted to be involved in the I’M ON campaign.

We need to encourage everyone to talk about periods, whether they experience them directly or not. Sparking conversation is the first step to normalising periods within society.

Bottom line: Anyone who experiences a monthly period should be included in the conversation surrounding period stigma.

According to a 2017 BuzzFeed article, in which several trans and nonbinary people spoke out about what's its like to experience menstruation during their transitions, the consensus stands: It really doesn't matter if you were genetically born male or female; if you have a period, you know it's a royal pain in the uterus.

In the article, the conversation touched on issues like what products to use, and how to deal with PMS symptoms, but what was most heartbreaking was how many trans men apparently don't talk about their periods, because a) it's "not socially acceptable," and b) some say it makes them feel ashamed. Nicholas, a 29-year-old trans male, told BuzzFeed,

As a man who has periods it's frustrating that they are treated as something that are categorically exclusively experienced by women. I know there are very few trans men in the world, but we do exist and our experiences are valid.

Stories like Nicholas' show exactly why it's so huge that Pink Parcel's campaign took the initiative to include Jones in its ad. Menstrual cycles are personal, but they're also universal, and no one should have to struggle alone.

The "I'm On" campaign isn't just an ad, mind you, but a line of white, black, and baby pink t-shirts that are incredibly inspiring. Embroidered with messages like "I'm on and I'm strong," "I'm On. Period." and "I'm On It," the campaign's intention is to normalize the conversation surrounding menstrual cycles, and to empower those who menstruate every month, despite the negative BS that's often hurled their way.

If you're looking to support the campaign, you can get your own "I'm On" t-shirt at Pink-Parcel.com, and every purchase donates about $7 to the Bloody Good Period organization to help provide menstrual hygiene products to refugees and others in need.