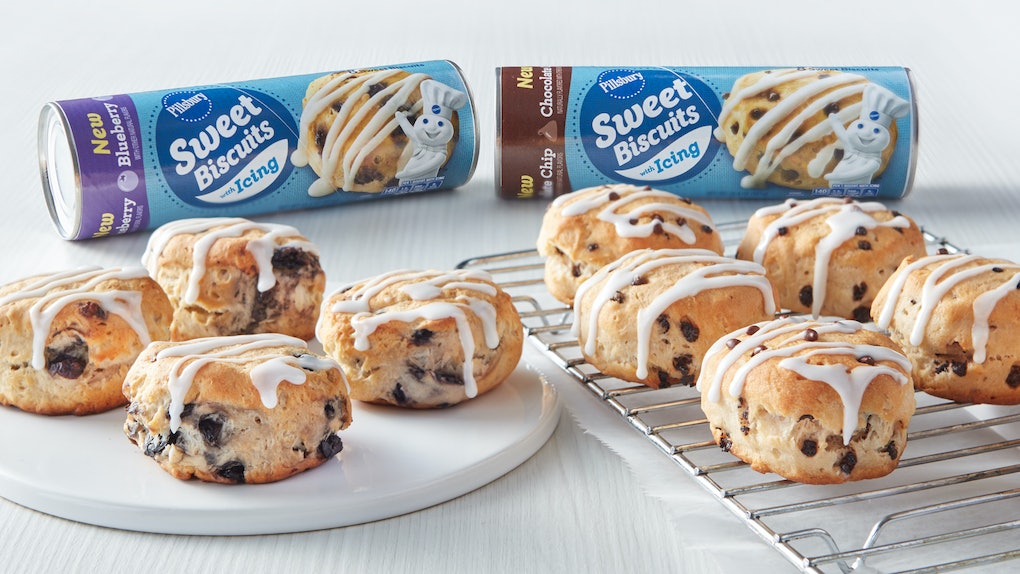 No matter how much you enjoy baking from scratch, there's no denying that having a few ready-to-make pastries on hand is always a good idea... especially after coming home from a long day of school or a relentless week of work. Thankfully, Pillsbury just released two sweet creations that look basically like a sweet tooth fever dream. In all seriousness, if you aren't already planning a night in with Pillsbury's new Sweet Biscuits with Icing, you're doing it wrong. They're basically just easy-to-make versions of the classic Southern dessert.

If you aren't from the South, you might not be familiar with sweet biscuits. So, let me bring you up to speed. According to A Family Feast, a recipe blog for "homemade family recipes," the sweet biscuit is a Southern delicacy which — when made the right way — comes out light, moist, and flaky. You know, kind of like a classic buttermilk biscuit, but with a slightly sweeter taste. The ever-sacred sweet biscuit can complement savory dishes, or it can be included in sweet desserts, like strawberry shortcakes or peach cobblers. They're extremely versatile, and if you ask me, people in the South definitely knows their way around biscuits.

Anyway, Pillsbury's Sweet Biscuits with Icing are a totally different story. According to the brand, they have the same flaky texture simliar sugary taste as your run-of-the-mill classic sweet biscuit, but Pillbury's version of the bite is drizzled in the brand's classic Cinnamon Roll vanilla icing that you've probably come to know and love. It's like cinnamon roll-sweet biscuit mash-up, and they come in two delicious flavor options: Blueberry, and Chocolate Chip. Apparently, they're super easy to make (as they're ready to eat in less than 20 minutes!), and they became available at select retailers in June, rolling out nationally at the end of July 2019, according to the brand. They'll cost $2.69 for a package of eight biscuits, but if you ask me, having a solid last-minute picnic dessert on hand this is summer is totally priceless.

And while the brand's new sweet biscuits are about to be my new obsession this summer, I'm also eyeing Pillsbury's new Place and Bake Brownies. They come in three delectable flavors — Fudge, Peanut Butter, and Marshmallow — and each $2.80 package comes with a total of 12 brownie dough rounds, according to the brand. They can be made in 19 to 21 minutes, depending on your preferred brownie texture, and while they are currently available at select retailers, they will officially rollout nationwide at the end of July 2019. So you will not have to wait too long for these babies, either, which is pretty good news.

Earlier this year, Pillsbury also released Marshmallow Sugar Cookies, which — if you ask me — is one of the brand's greatest creations to date. Each individual cookie is sweet, soft, and sugary, containing tasty, ooey-gooey marshmallow flavored bits. Seriously, they're a must-try treat.

Regardless of how you decide to enjoy your sweet biscuits, having some cans in the fridge on hand is bound to come in handy at some point. Just don't leave out a plate of fresh ones in front of me... there's a chance you won't get to try any for yourself.