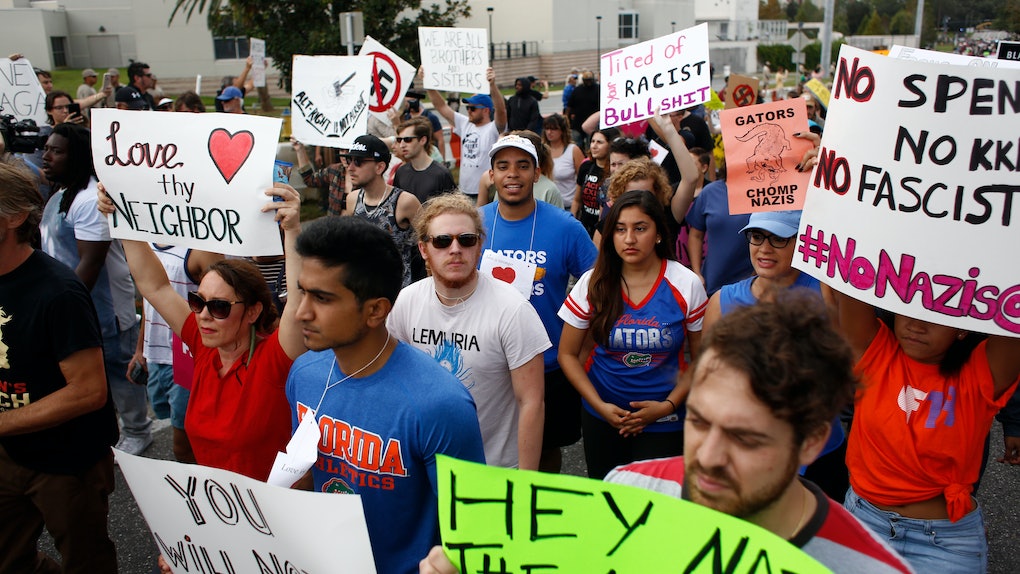 Photos Of University Of Florida Protests Against Richard Spencer Are Intense

White nationalist, perennial troll, and leader of the "alt-right" movement Richard Spencer is giving a talk at the University of Florida in Gainesville today, Oct. 19. As usual, his presence in a university town has become a magnet for protests and counter-protests. And, as you can see from photos of protests at Richard Spencer's speech in Florida, the atmosphere is intense.

Before Spencer was slated to give his talk, students and residents of Gainesville gathered to protest his presence on the campus. In fact, the University of Florida initially tried to stop Spencer from coming to speak on campus, before they were threatened with a lawsuit, according to The Miami Herald and The Washington Post. The university's president has stated that, despite Spencer's presence on campus, he does not condone Spencer's message. He tweeted, "I stand with those who reject and condemn Spencer’s vile and despicable message."

An estimated 800 tickets were handed out for the event, but one theater manager told The Washington Post that there were only 400 people in the audience, including media.

Though his speech proceeded as planned, protesters disrupted him time and time again, chanting and even asking questions like "What was it like to get punched?" (Spencer was punched in the face at the inauguration. Twice. But, as The Verge reports, the memes are what really hurt.)

Spencer was one of the chief architects of the violent Charlottesville "Unite the Right" rally in August that led to the death of one anti-racist counter-protester. He has previously called for the "peaceful ethnic cleansing" of the U.S., and espouses racist and anti-Semitic ideology. He has previously denied being a racist, according to the Southern Poverty Law Center, but only weeks after Trump's surprising victory in Nov. 2016, Spencer gave a speech and, with it, a Nazi salute, saying, "Hail Trump, hail our people."

According to Hillel International, University of Florida has one of the largest Jewish student populations in the U.S., with 6,500 Jewish undergraduate students and 2,900 graduate students. There is also a sizable Latinx population on campus — another group that Spencer has targeted with his hateful rhetoric.

Content warning: there are photos featuring racist and anti-Semitic imagery ahead.

Members of the community and students marched in the streets.

And while protesters were there to stand up against Spencer's dangerous rhetoric, which consistently calls for ethnic cleansing and a white patriarchal ethno-state, many people approached the day with levity.

The protest outside of the event quickly became heated.

A man wearing a t-shirt with swastikas all over it started to taunt the crowd.

He was punched in the face during a shouting match between groups.

But the march was largely peaceful, and according to several bystanders, the man — who sported the red braces and shaved head of 80s neo-Nazis and, if it weren't obvious to passersby, swastikas — was goading on protesters.

Several journalists reported that protesters chanted. When Spencer got visibily frustrated and asked if they were adults, the protests just chanted louder.

Some protesters were also able to ask Spencer questions about his white supremacist beliefs.

Spencer's talk was more of the same: he claimed that white people are under attack, and that he is being silenced, despite, as historian and professor Angus Johnston pointed out, having an enormous platform at a public university.

Maybe Spencer was referring to the fact that people kept chanting over him, which seemed to get under his skin.

And let's give it up for the hero who asked him what it was like to get punched in the face.

Keep on keeping on, Gators.