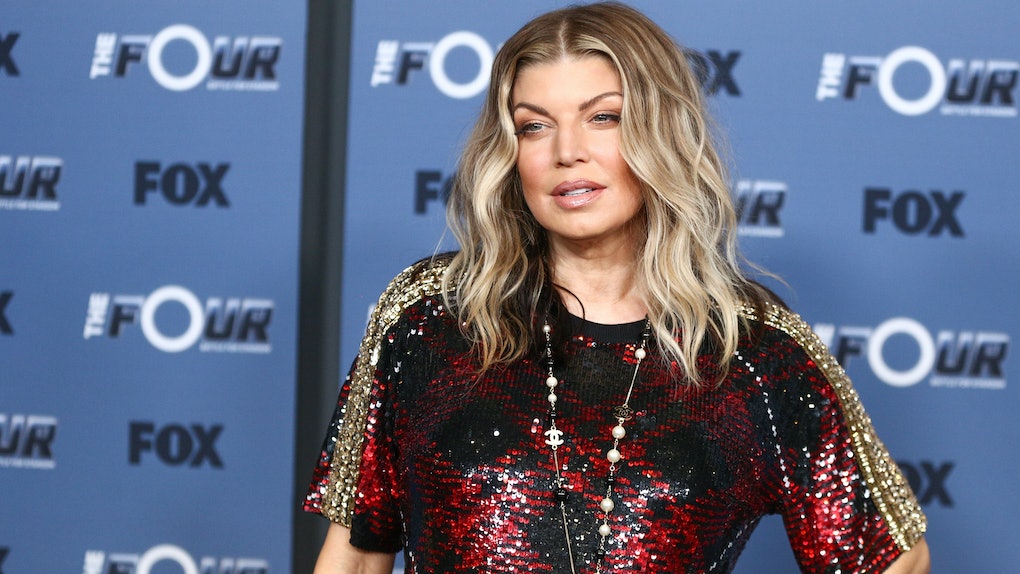 If you've been shying away from fiery hues when it comes to your hair color, photos of Fergie's hair might convince you to take a plunge into the red hot wild side of things. The singer (and one of my teenage idols) just debuted a new style featuring streaks of bright orange, yellow, and red, and honestly I like it more than her signature sandy blonde locks.

Fergie will forever be one of the artists that made a huge impact on me during my formative years. I was obsessed with The Black Eyed Peas and thought it was so, so rad that Fergie was leading an otherwise all-male group. In the early aughts that was uncommon—Fergie was my first feminist icon before I even knew I had one. Aside from her boss babe-ness, Fergie was also a part of my first run-in with the law. I got a speeding ticket on my way home from a high school football game and getting pulled over scared the living daylight out of me. After being consoled by my two friends who were passengers in my car, I put the key back in the ignition and got ready to drive the rest of the way home. What should ironically blare out from the radio but Fergie's "Big Girls Don't Cry." I lost it.

Needless to say, that moment has stuck in my head for the past 10 years and has caused me to have a strange lingering interest in Fergie. Although I haven't listened to any of her new music—she released a new solo album called Double Dutchess at the end of 2017—I've continued to regard her as one of the coolest female artists in the game. And after seeing her new hair transformation those feelings have only been strengthened.

Last night, Fergie performed at the Feinstein Summer Concert, an annual event held to benefit the Feinstein Institute for Medical Research. According to their website, the institute " is composed of more than 1,500 clinicians, scientists and staff who work in laboratories and clinical research programs in collaboration with clinicians and patients throughout the many facilities of Northwell Health." As of 2017, the annual concerts, which started in 2005, had raised over $17 million—an honorable cause for Fergie to partake in, indeed.

For the occasion, Fergie took to the stage in a shimmery silver jacket a la '80s glam metal, a pair of black shorts, and sky high heels. Her best accessory, however, was her brand new hair color. Her signature sandy blonde hue remains the dominant color of her style, but streaks of orange, red, and yellow now peep out from underneath. As reported by Popsugar UK, her new look was executed by expert colourist George Papanikolas and expert stylist Nick Stenson, along with Eli Mancha and Amanda Stone. The latter two individuals won the chance to help out with Fergie's new look by winning the Fergie x Matrix contest the singer announced in January. Earlier this year, Fergie became Matrix's SoColor Cult Icon.

To achieve the look, the team used Matrix SoColourCult Semi-Permanent Hair Colour, which is a line of professional color only available to professional stylists. It offers an array of ultra-vivd hues like the sunny shades seen in Fergi's hair last night.

Fergie matched her eyeshadow to her fiery locks, taking the stage with uber shimmery orange lids. The entire beauty look is perfect for bright summer days and nights out that turn into sunrises and is excellent inspiration for if you're looking to radically change up your own look. Leave it to Fergie to bring the heat.