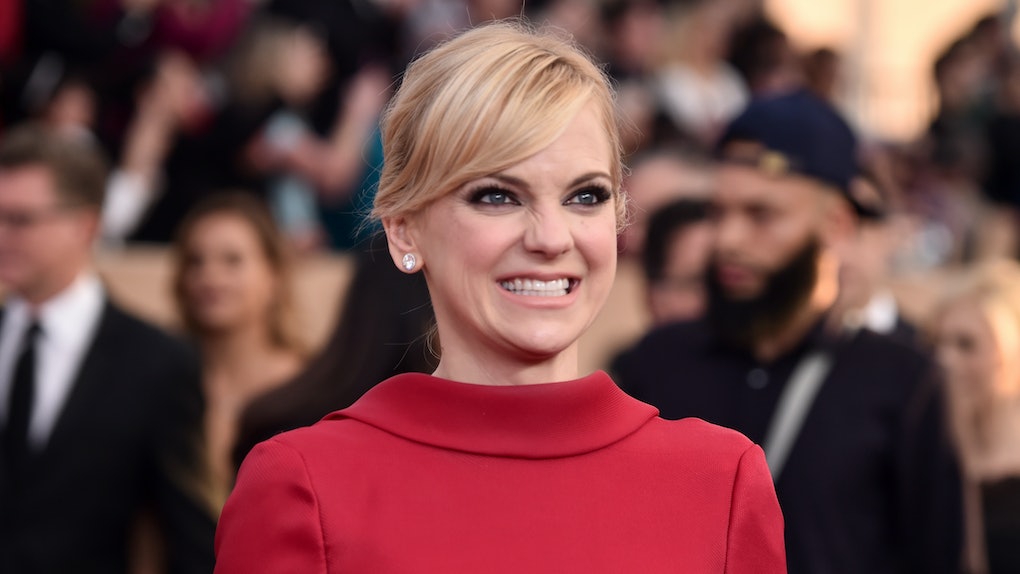 Anna Faris might be back on the dating scene following her split from husband Chris Pratt this summer. On Sunday, Aug. 6, Pratt and Faris released individual statements on social media announcing they were separating after eight years of marriage. The statements focused on their love for their 5-year-old son, Jack, and how they focus on co-parenting in the future. Now it looks like Faris might be dating a guy named Michael Barrett! They were recently seen going on several dates, and the photo of Anna Faris and Michael Barrett might prove they're actually a couple.

Elite Daily reached out to Faris' team for comment, but did not hear back by the time of publication.

According to IMDb, Barrett worked on one of Faris' upcoming films, Overboard. Barrett has also worked on films like Kiss Kiss Bang Bang andTed, and TV shows like CSI: Miami as a cinematographer. E! News reports Faris and Barrett been on multiple dates. An eyewitness reportedly said they recently saw Faris and Barrett on a dinner date at an Italian restaurant called Modo Mio in Los Angeles twice in two days. The source said it the dinner definitely looked "like a date." They added,

They were laughing at the table. She looked very happy and had a smile on her face when she was leaving.

On Sept. 10, Faris and Barrett were seen hanging out at a carnival in L.A. Faris and Pratt's son, Jack, was also there.

The pictures show Faris and Barrett sipping on beer and wine and having a fun time. When it comes to their recent L.A. dinner dates, the source added,

It was definitely a dinner date. It seemed romantic in the way they were looking at one another and how they were laughing at the table... No one in the restaurant realized it was her, but she definitely looked to be on a date.

Barrett reportedly paid the bill and then they left the restaurant looking happy! Faris hasn't confirmed Barrett is her official boyfriend, but whatever their relationship is, it looks like they're definitely enjoying each other's company.

Faris opened up about her separation from Pratt in an interview with People. She said she and Pratt still have a lot of love for each other and he still makes her laugh like crazy. She told the outlet, "We'll always have each other and be incredible friends." She added,

It's understandable that people seemed so invested in our happiness together. All I can say about that is it's all true — that we truly adore each other, and we love each other. I think it still comes through.

We are sad to announce we are legally separating. We tried hard for a long time, and we're really disappointed. Our son has two parents who love him very much and for his sake we want to keep this situation as private as possible moving forward. We still have love for each other, will always cherish our time together and continue to have the deepest respect for one another.

Anna and I are sad to announce we are legally separating. We tried hard for a long time, and we’re really disappointed. Our son has two parents who love him very much and for his sake we want to keep this situation as private as possible moving forward. We still have love for each other, will always cherish our time together and continue to have the deepest respect for one another.

Faris had been married to Ben Indra for three years when she met Chris Pratt on the set of Take Me Home Tonight. In her upcoming autobiography, Unqualified, Faris reveals she actually left Ben Indra for Chris Pratt. She said she knew in her heart that her marriage to Indra wasn't working out and that her chemistry with Pratt was "palpable."

She reveals that once she knew her feelings for Pratt were as strong as they were, she called her husband and told him she was leaving him. He apparently didn't believe her at first, brushing it off as her being exhausted, but she said, "Nope, I'm leaving you." She says in the book that once this phone call went down, she went to Pratt's place "ready to get boned." When they hooked up, she said it was "hot and heavy in a way that [she'd] never experienced before." She says in the book,

Sure, I get to proclaim that I didn't f*ck Chris before I left Ben, but what is there to celebrate in that? It didn't make me a hero. After all, I wanted to. Desperately. And I had feelings for him, obviously, even if I wasn't honest with myself about what those were.

As of right now, it doesn't look like Chris Pratt is dating anyone.