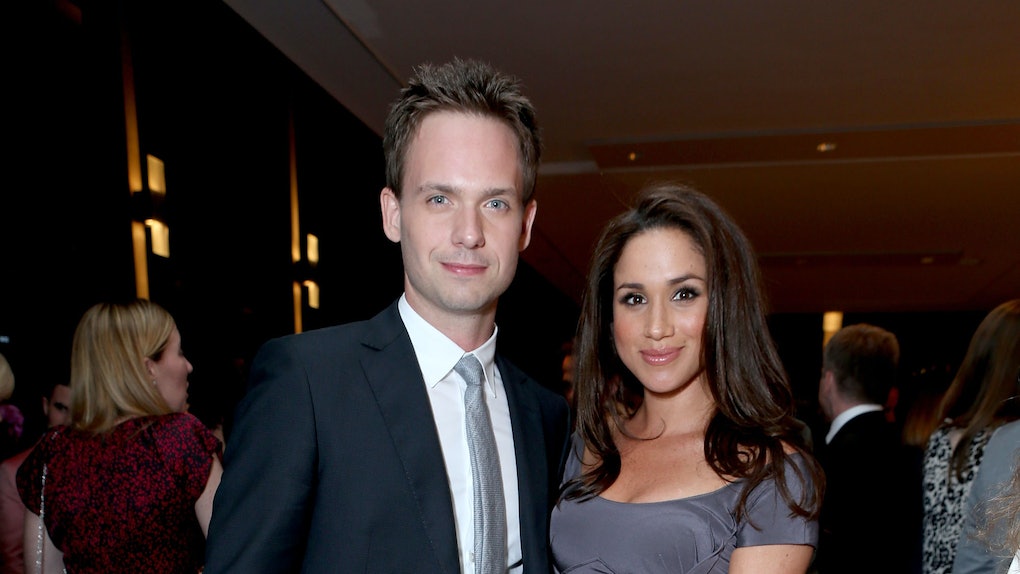 Days ahead of Meghan Markle and Prince Harry's March 7 tell-all interview with Oprah, the Palace launched an investigation into years-old bullying accusations against Meghan by Palace aides. It's a move many are calling a transparent attempt to attack Meghan's character and integrity ahead of what promises to be a bombshell interview. Add one of Meghan's former Suits co-stars to that list, because Patrick J. Adams' tweets defending Meghan Markle from bullying accusations are passionate. Adams did not hold back a single bit in defending his friend.

On March 2, The Times published a report detailing bullying allegations from Meghan’s two former aides who claimed she would drive them to tears. Shortly after the allegations came out, a spokesperson for Meghan firmly denied the allegations. "Let's just call this what it is — a calculated smear campaign based on misleading and harmful misinformation," they said in a statement. "We are disappointed to see this defamatory portrayal of the Duchess of Sussex given credibility by a media outlet. It's no coincidence that distorted several-year-old accusations aimed at undermining the duchess are being briefed to the British media shortly before she and the duke are due to speak openly and honestly about their experience of recent years.”

On March 5, Adams stepped in to defend Meghan's reputation as well. Adams played Meghan's love interest for seven seasons of Suits from 2011 to 2018, so he knows a bit about what it's like working with her. "Meghan Markle and I spent the better part of a decade working together on Suits. From day one she was an enthusiastic, kind, cooperative, giving, joyful and supportive member of our television family. She remained that person and colleague as fame, prestige and power accrued," Adams wrote.

After defending Meghan's character, calling her "a powerful woman with a deep sense of morality," Adams took aim at the royal institution.

"She fell in love, moved to a new country, became a household name across the entire globe and began the difficult work of trying to find her place in a family dynamic that can at best be described as complicated and at worst, seemingly archaic and toxic," he said. "It’s OBSCENE that the Royal Family, who’s newest member is currently GROWING INSIDE OF HER, is promoting and amplifying accusations of 'bullying' against a woman who herself was basically forced to flea the UK in order protect her family and her own mental health."

Making his opinion about the royal institution abundantly clear, Adams implied their days are numbered. "IMO, this newest chapter and it’s timing is just another stunning example of the shamelessness of a institution that has outlived its relevance, is way overdrawn on credibility and apparently bankrupt of decency," he wrote, before reminding them that his friend Meghan is "out of your league."

Adams' impassioned Twitter rant in Markle's defense comes a day after Suits writer and producer Jon Cowan also defended Meghan on Twitter. It's clear as day that Meghan's old co-workers had a very different experience working with the Duchess than her royal aides.