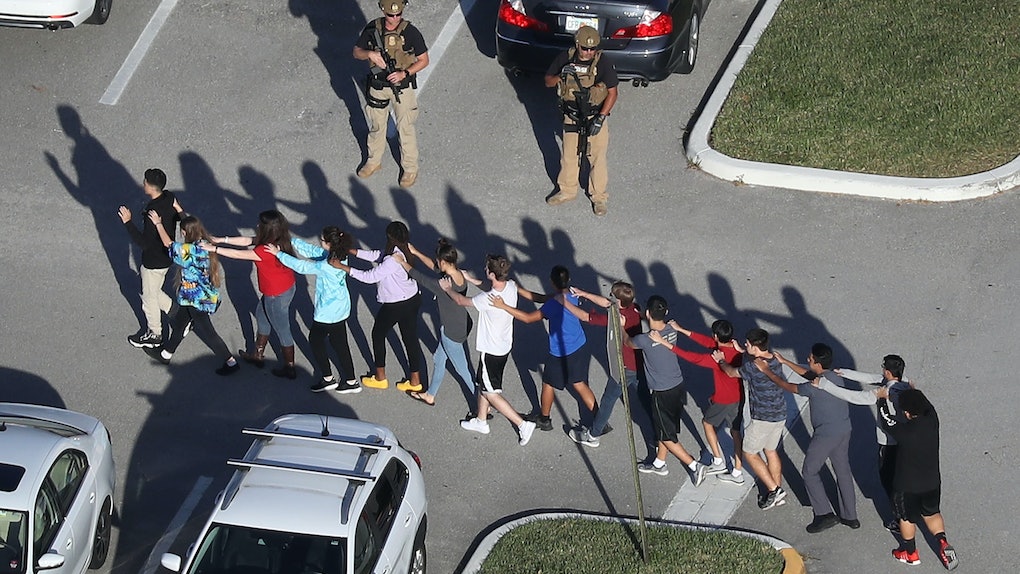 The mass shooting at Marjory Stoneman Douglas High School in Parkland, Florida on Wednesday, Feb. 14 was the 18th school shooting in the United States since the beginning of 2018. With that high of a number not even two full months into the new year, people are calling for major change. More specifically, Parkland school shooting survivors are calling for gun control now, and they cite their respective experiences during the shooting as compelling reasons why.

The alleged shooter took 17 lives on Wednesday, and the scene during the mass shooting was relayed to the public by students and teachers following the tragedy. These individuals who lived through unimaginable horror are now calling for action. The pleas for stronger gun control are difficult to ignore after you hear them coming from teenagers reminding Congress that the students in this high school are children that should never have experienced such horrific tragedy.

A senior at the high school, David Hogg, spoke to CNN in the aftermath of the shooting, and he got straight to the point with his message to Congress. He said, "We're children. You guys are the adults. You need to take some action and play a role. Work together, come over your politics, and get something done."

In that same interview Hogg, a student journalist, revealed that his younger sister, a freshman, lost her two best friends in the shooting. Hogg also captured some of the very graphic scene during the shooting in a video recording because, he told CNN, he thought to himself that if he was going to possibly die, he wanted to make an impact. He said, "I want to show these people exactly what's going on when these children are facing bullets flying through classrooms and students are dying trying to get an education. That's not OK, and that's not acceptable and we need to fix that."

Teachers whose harrowing actions saved many lives followed the emergency protocols as they were taught, but, as one teacher explained to MSNBC, those actions still weren't enough to save the 17 lives lost. Melissa Falkowski, a journalism teacher at the high school, spoke to MSNBC on Wednesday night, and as Falkowski described hiding 19 students in a closet to shield them from the alleged shooter, she explained that more needs to be done in politics to save lives. Speaking of action, Falkowski expressed her feeling that it's time for Congress to talk about the problem and fix it because "it's not OK" that 17 people died in the shooting even though every precaution was taken by the school.

Falkowski continued calling for stricter gun control laws on Thursday, Feb. 15, as she spoke with Hoda Kotb and Savannah Guthrie on the Today Show. Falkowski said that not talking about gun control after a mass shooting is not the right move to make progress. She explained, "As a society, you know, as Americans, we’re failing our children. We’re not keeping them safe, and Congress is failing us, and the government is failing us, and something has to be done."

Another call for gun control came in the form of highlighting the role guns played in the shooting from Carly (@car_nove) on Twitter, who is presumably a student at Marjory Stoneman Douglas High School. Carly was replying to a tweet from Tomi Lahren that claimed, "This isn't about a gun; it's about another lunatic." In response, Carly wrote, "I was hiding in a closet for two hours. It was about guns. You weren't there, you don't know how it felt ... This is about guns, and this is about all the people who had their life abruptly ended because of guns."

Another Twitter user who goes by Sarah, according to The Independent, responded to President Trump's "prayers and condolences" by calling for action in a now-deleted tweet. She wrote, "Multiple of my fellow classmates are dead. Do something instead of sending prayers. Prayers won’t fix this. But gun control will prevent it from happening again."

The gun control debate following a mass shooting has become as commonplace as the shootings themselves. These latest survivors are not here for your thoughts and prayers. They are calling for congressional action and laws to prevent future mass shootings, and their harrowing tales should be reason enough to have the conversation right now.