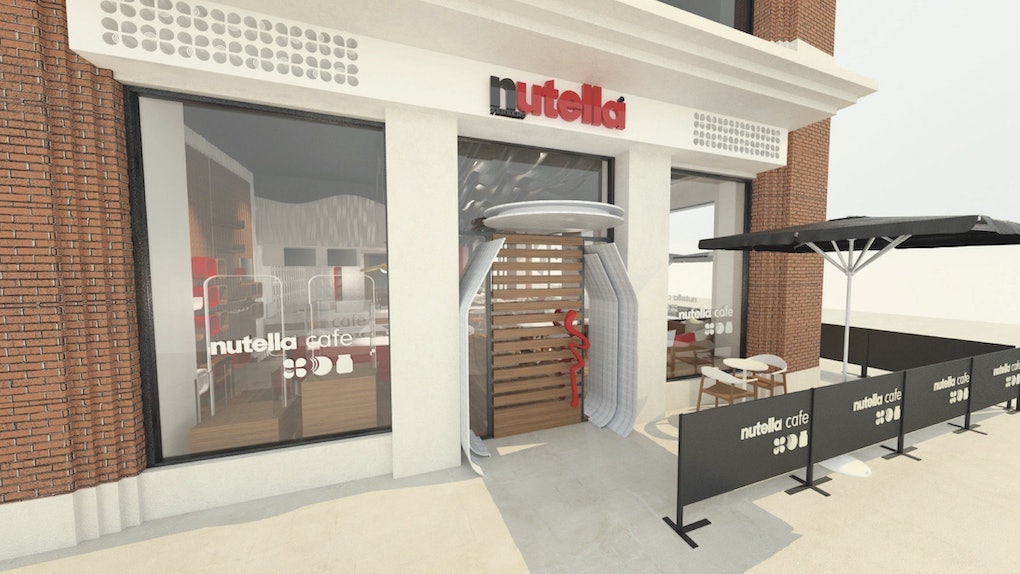 NYC’s Nutella Cafe Is Coming In The Fall, So Bring On All The Hazelnuts

Big Apple dwellers, start readying your taste buds for Nutella everything, because America's second Nutella Cafe is making its home in New York City. Ferrer Rocher, aka the company behind the addictive chocolate concoction, revealed in a press release on Sept. 6 that NYC’s Nutella Cafe is coming in the fall, updating a previous announcement sharing that Nutella fanatics won't have to book a trip to Chicago to get their hazelnut spread fix anymore. In just a few weeks, you'll be able to enjoy Nutella concoctions for breakfast, lunch, and dinner, and it's safe to say you'll be living your very best Nutella-infused life when the seasons turn.

As every Nutella devotee knows, the company welcomed the world's first Nutella restaurant in the Windy City on May 31, 2017. When the location opened its doors at 189 N Michigan Ave, I felt like I'd gone to hazelnut spread heaven, quite literally. Not only were flaky croissants and crêpes brimming with Nutella on offer, but the menu also featured items like Nutella oatmeal, Nutella French toast, and even Nutella fondue. My personal favorite? Coffee that was crowned with a dollop of Nutella on top.

Unsurprisingly, the spot was a hit with lines wrapping around the block, and Ferrero is now trying to bring some of its hazelnut spread magic to New York City, specifically at 13th Street and University Place, near Union Square, according to a June 7 press release.

"There truly is nothing like the taste of Nutella® hazelnut spread, and with the overwhelmingly positive reaction to Nutella Cafe Chicago, we know our fans feel the same way, Rick Fossali, vice president of operations, said in the June press release. "It's their excitement that propelled us to open another Nutella Cafe and continue to showcase the uniqueness and versatility of this beloved product."

While it was previously reported that the new cafe would be opening "before the end of the year," Ferrero is now confirming that we can all expect the location to open its doors as early as this fall, which means there's potentially just weeks to go before you can order a “Panzanella” fruit salad with yogurt and a generous drizzle of Nutella, finished off with a cone of Nutella Gelato. According to the press release, the location will offer a "Nutella-inspired cafe menu and specialty espresso beverages." If the Chicago Nutella Cafe menu is anything to go by, the possibilities are endless, and there's something for everyone.

While the decision to open the world's second location stateside instead of a more global city like Milan or even Alba, Italy, (Ferrero's headquarters) might seem surprising, the company hopes to utilize the Big Apple's reputation as a metropolis brimming with different cultures to help create even more Nutella lovers around the world.

"Nutella is global power brand and the popularity of the spread is built on Ferrero's uncompromising focus on quality ingredients," Fossali said in the press release. "As a multicultural epi-center, New York gives us the opportunity to explore and offer new ways for our local fans to enjoy Nutella, while reaching millions of tourists visiting the city."

New Yorkers, the countdown for publicly inhaling Nutella for breakfast, lunch, and dinner is here, and in my opinion, the timing couldn't be more perfect with sweater weather just around the corner. A Nutella-topped PSL, anyone?