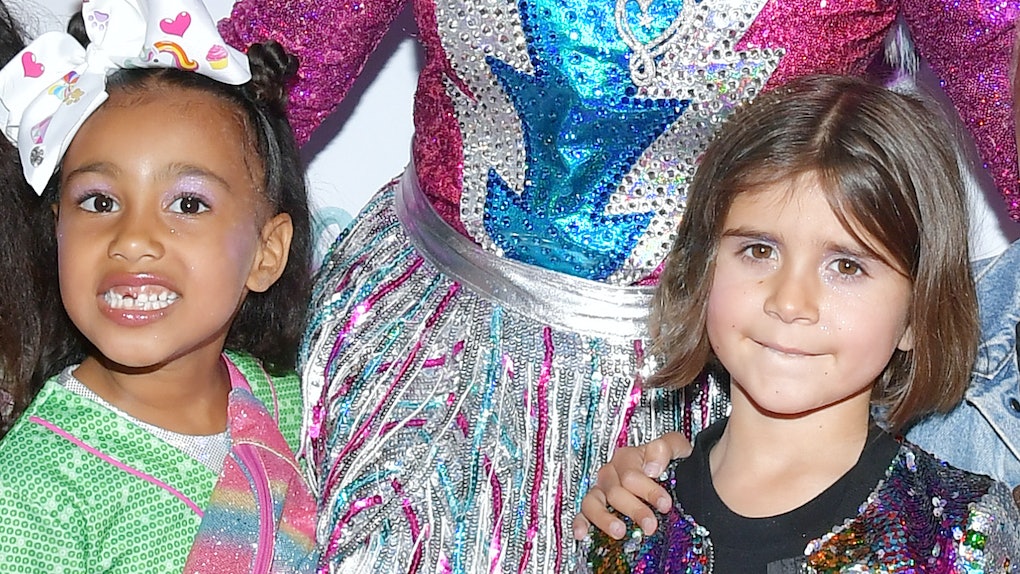 By now, there's no question about whether or not a Kardashian birthday party will be over the top, and North West and Penelope Disick's joint birthday bash was no exception. Since the BFF cousins' birthdays are less than a month apart, it makes sense they'd celebrate together, and their June 15 celebration was one they'll probably never forget. North West and Penelope Disick's Candy Land-themed birthday party was filled with all the candy and colorful decorations a kid could want, and it was seriously so sweet.

On Saturday, June 15, Kim Kardashian West and Kourtney Kardashian both took to their Instagram Stories to share videos of the big day. Now, the cousins may be a year apart in age, but since North's birthday falls on June 15 and Penelope's is on July 8, a joint bash is really the way to go. Plus, the two cousins seem more like best friends than anything else.

On Kim's Story, Kardashian stans could see Kourt's massive backyard essentially turned into a giant Candy Land board. There was also no shortage of sweets, including a birthday wish to both North and Penelope spelled out in various colorful candies. There was even an old-school ice cream truck there handing out soft serve with rainbow sprinkles.

The birthday girls themselves took a cue from the colorful theme, and they totally dressed the part. In a pic shared to Kourtney's Instagram Story, you can see Penelope, who turns 7 in July, and 6-year-old North standing with their arms around each other as Kourt's daughter sports a sky-high headband that looks like an oversized lollipop and Kim's eldest daughter dons rainbow-colored hair. TBH, they both look Candy Land chic with their sweets-inspired duds, and I'm very here for it.

Other Kardashian family members in attendance at the big bash included their Lovey, aka grandma Kris Jenner; Penelope's dad, Scott Disick and his girlfriend, Sofia Richie; and Auntie KoKo. Khloé Kardashian showed off the girls' birthday cake from Flour Shop, which was decorated with bright candies on the outside and filled with candy and rainbow sprinkles that spilled out from the inside once it was cut open.

There were no pics of North's new little brother, Psalm West, at the party, but Chicago was there in Grandma Jenner's arms as Kim showed off another impressive candy collection from which I assume guests could take what they pleased. IDK if anyone got their hands on the lollipop chandelier, but it's clear from Kim and Kourt's vids that they went all in on the Candy Land theme. And, like, honestly — what more could a kid want? I don't know about you, but I'll be busy scheming ways to become a part of the KarJenner krew before my next birthday, because I wouldn't mind an all-you-can-eat candy theme for my next bash.

While North and Penelope's b-day was literally sweet, Kim also shared a sentimental IG post about North turning 6 on June 15. In it, she wrote, "Happy Birthday my sweet girl! The last 6 years have been the best of my life raising you and seeing you grow up. Mommy loves you forever and beyond!" Accompanying the caption were five super sweet mother-daughter photos.

Since Penelope's actual birthday isn't until July, you can look out for Kourt's post celebrating her daughter then. Until then, I'm sure everyone will be nursing sugar comas, but, hey, that's what birthdays are for, right?