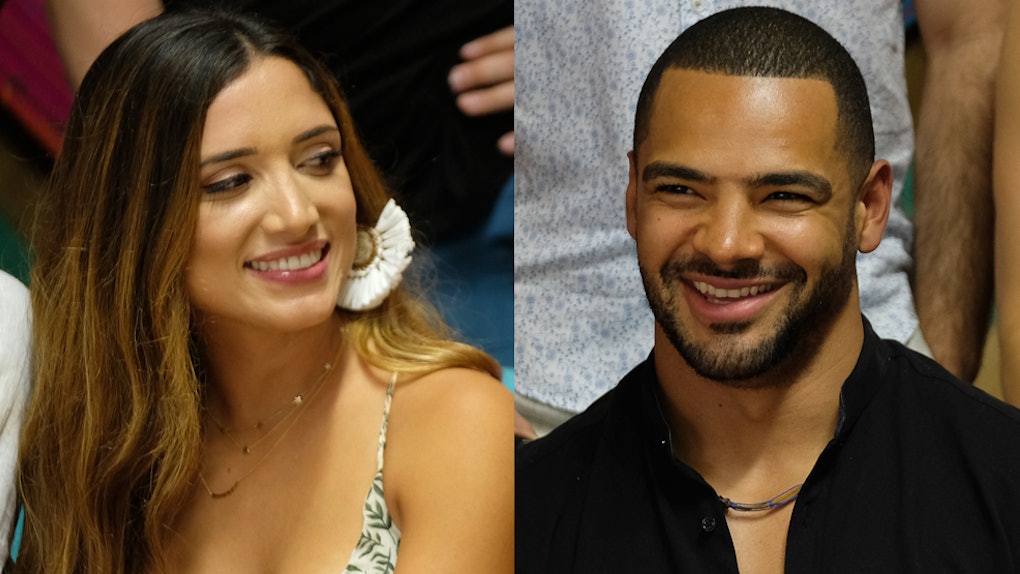 I think we can all agree that Bachelor In Paradise is really bringing it this season, especially if you're all-in on the romance growing between Nicole Lopez-Alvar and Clay Harbor. It hasn’t exactly been a smooth road for these two, considering the whole physical fight between Jordan and Christian over Nicole, and later, Clay’s ex Angela showing up in Paradise. It's safe to say they’ve already faced some challenges, and yet, they’ve stayed pretty solid. But do they have what it takes to go the distance? Considering Nicole and Clay’s astrological compatibility, the answer may give fans of this couple some cause for concern.

Nicole was born on Nov. 23, under the sign of Sagittarius, and Clay's birthday is July 2, which makes him a Cancer. These two signs have a ton of initial chemistry, which is why they often make for such unbreakable BFFs. However, when it comes to romance, these signs face serious hurdles, as their needs and desires in a relationship are often polar opposites. While a lasting romance is certainly possible between these two, it's not the easiest and most natural of matches. So, this could either make for an epic romance, or end in an epic Paradise heartbreak. Here's what we can surmise about Clay and Nicole's connection based on their astrological compatibility.

They Have Fun Just Being Together.

Cancer and Sagittarius are often drawn to each other thanks to their shared sense of humor. Cancer has an impressive wit, and jovial Sagittarius is attracted to anyone who can make them laugh. This is a pairing that tends to have hundreds of inside jokes and can make one another giggle with just a look. This kind of joyful connection can be really appealing and make signs that would otherwise really struggle want to make it work. And the intensity of that desire is make-or-break for these two signs.

In addition to knowing how to effortlessly make the other laugh, there is a powerful sexual chemistry between Sagittarius and Cancer. Cancer is mysterious, and Sag is compelled to see Cancer’s hidden depths. Whereas for cautious Cancer, the free and optimistic Sagittarius feels like a breath of fresh air. This makes each partner want to inhabit the other, both spiritually and, ahem, physically. Sagittarius’ is represented by the symbol of a hunter, and Cancer is easily swept up in their intense pursuit, to the point where they can temporarily put all their anxieties aside and fall into bed. And, of course, the thrill of the hunt is a huge turn-on for Sag.

Their Biggest Struggle Is Not Being On The Same Page Emotionally.

While a romantic connection between Cancer and Sagittarius can start off light and passionately, once deeper emotions begin to take root between these two, troubles can arise. Cancer is a water sign, ruled by the Moon, which means they are extremely emotional and vulnerable, which puts them on the defense. Sagittarius, on the other hand, is basically fearless because they are so skilled at turning their emotions off and on at will. This dichotomy is a breeding ground for trust issues between the two if not carefully attended to.

They Are Likely To Trigger One Another’s Worst Instincts.

Sagittarius and Cancer are capable of bringing out the best in each other. Cancer can ground Sagittarius and help them open up emotionally. Sagittarius can force Cancer to lighten up a bit and see the more optimistic side of life. On the flip side, they are also able to trigger each other's worst instincts. The conflict boils down to Cancer’s need for security and Sagittarius’ desire for freedom. If either feels threatened, they either become aloof or clingy, which creates a feedback loop of pushing and pulling that can rapidly grow toxic as they ignite each other’s worst fears about relationships: abandonment for Cancer, and confinement for Sagittarius. While it’s possible for these two to overcome this divide, it takes a lot of desire, empathy, and work. But when the connection is strong enough, it's totally worth it.

What does all this mean for Clay and Nicole? Only time can tell if they're the kind of Cancer and Sagittarius pairing that burns bright until it burns out, or if they're one that leans in and does the work to make their connection last. Fingers crossed they're the latter.