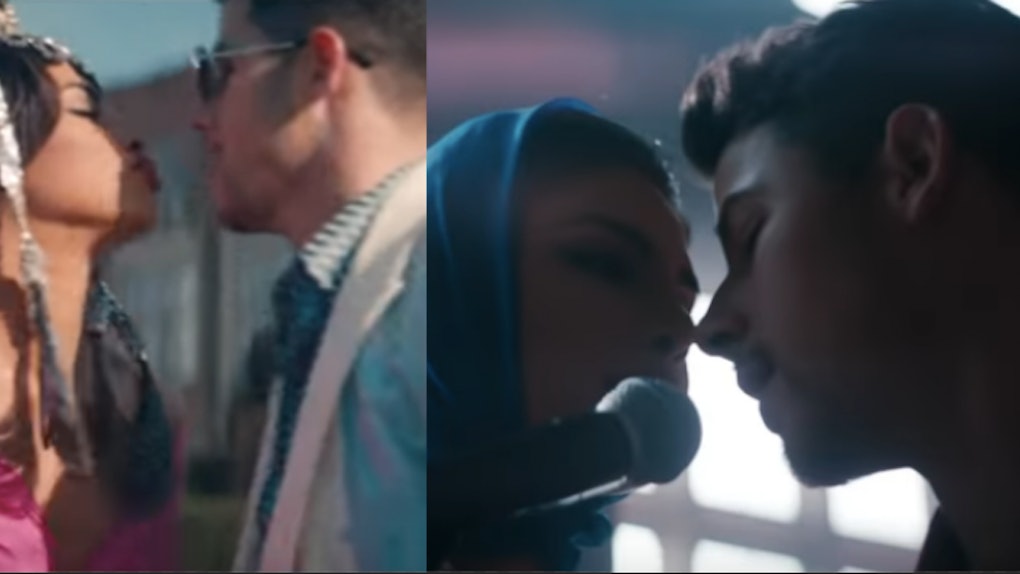 To anyone else who is shaken to the core by the new Jonas Brothers single, you’re not alone. This week has brought 14-year-old Sarah more joy than she ever knew was possible at age 24. Everyone’s favorite boy band is back, and as Priyanka Chopra Jonas said on Instagram... “hotter than ever.” I’ve been blasting JB songs exclusively for the last few days, and I’m thrilled that the new song is a total bop. Plus, the video features none other than the Jonas Sisters themselves! Nick Jonas and Priyanka Chopra Jonas' body language in "Sucker" makes me believe true love is real, and I can’t get over the fact that the boys brought their girls in for this fabulous video.

Nick and Priyanka’s love story is already nothing short of magical, and their wedding photos prove it. They leave flirty comments on each other’s Instagrams and are overall just super supportive of one another’s work. But this video, y’all… OMG. They’re so hot together! I spoke with body language expert Blanca Cobb to get her opinion on what their body language reveals, and turns out, it’s even better news than I expected. The couple gets seriously steamy and shows off just how hot their connection is IRL. BRB, grabbing some ice water to cool off.

This is the first moment we see of Priyanka and Nick together in the video. “She is looking at his lip as she’s approaching the microphone,” Cobb notes. “It’s like, ‘I want you.’” Nick is singing, but their faces are so close it looks as though Priyanka might kiss him.

First of all, their outfits in this flirty moment are so extra and so fun. Cobb notes that Priyanka is totally playing with Nick in the way she moves her body. “She has a lip pucker ... not only is she leaning forward, but she is moving her shoulders back and forth,” Cobb says. “And you can see how the dress comes down in a V. It's getting his attention on her.” It’s like she’s saying, “Look at me, you know you’re totally smitten.”

Here’s where things really start to heat up. "Now she's disrobing just a little bit — it's getting hotter,” Cobb notices. “He's drinking water, which gives the impression that it’s getting hot for him too.” Then as they’re walking away, Priyanka looks behind her. “She has her hands on his shoulder and is looking back to make sure no one is following them,” Cobb says. We all know what’s about to happen next.

This kiss, you guys!! *insert fire emoji here* The best part of it, as Cobb notes, is that Priyanka is taking the lead. “She's holding him by the vest, saying, ‘I'm in charge,’” Cobb observes. “And what I love about it is that he's super cool about it!” She notes that it’s refreshing to see that kind of balance with couples, where there’s some give and take both ways.

In this climactic moment, Priyanka saunters toward her man with utter confidence and power. “She's walking toward him and shimmying her shoulders, and it says, 'This is what you're going to get next,’” Cobb says. “She comes across confident and sexier because she owns it.”

Cobb noted that even though these moments are obviously scripted, they still show us that Priyanka is a total boss babe. “She owns her sexuality, she owns her movement, and that's a big appeal,” she says. Priyanka can’t take her eyes (or hands) off her man, and she wants the world to know it. And the best part? There was basically no acting required for this video — the feelings here are 100 percent real.