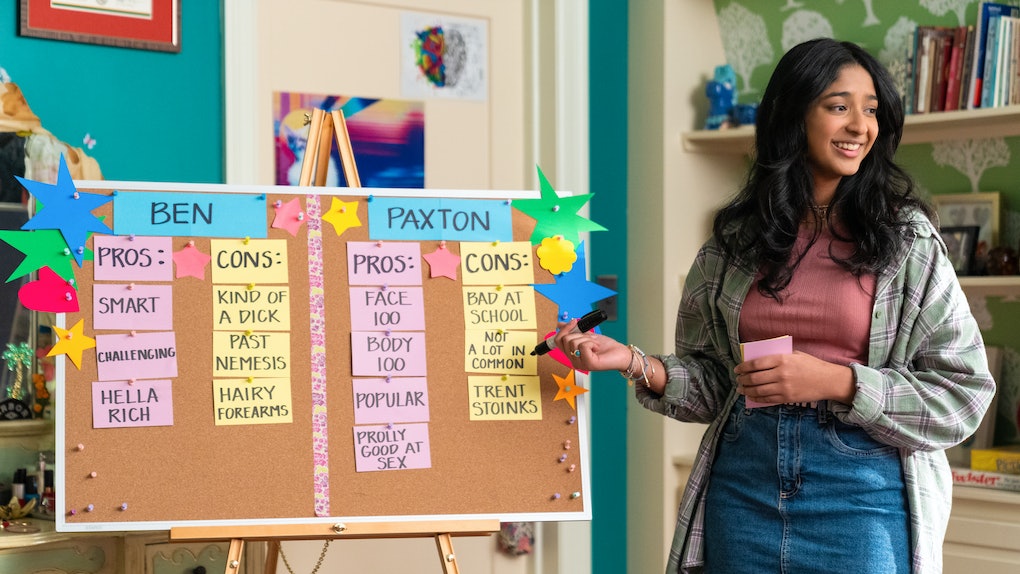 When Never Have I Ever premiered in April 2020, it was just the right coming-of-age series Netflix viewers needed. Created by Mindy Kaling and Lang Fisher, the semi-autobiographical dramedy received rave reviews for highlighting South Asian stories and breaking stereotypes. Critics and audiences both loved the series, so it's no surprise a Never Have I Ever Season 2 is coming. But when is the show returning? Fans don't have to wait long.

Never Have I Ever stars Maitreyi Ramakrishnan as Devi Vishwakumar, a high school sophomore from the Los Angeles suburbs. Stricken by grief after her father's unexpected death, she started her second year of high school with best friends Eleanor (Ramona Young) and Fabiola (Lee Rodriguez) determined to make 10th grade her year. But her relationship with her family (especially her mother Nalini, played by Poorna Jagannathan) made things hard. Moreover, her self-esteem suffered from constantly comparing herself to her beautiful cousin, Kamala (Richa Moorjani). But even so, by the end of Season 1, she'd found herself torn between two guys: her crush, Paxton (Darren Barnet), and her nemesis, who turns out to be a far better friend, Ben (Jaren Lewison).

With Season 2 greenlit in July 2020, fans have been waiting eagerly for news about the new season. Here's what to know:

'Never Have I Ever' Season 2 Trailer

Filming for Never Have I Ever Season 2 began in November 2020. With the first photos of the season now out, it seems like the new season is ready and waiting to debut. As of April 14, there's no teaser or trailer for Season 2.

'Never Have I Ever' Season 2 Cast

All of the main cast are expected to return for Season 2, including Maitreyi Ramakrishnan as Devi and Poorna Jagannathan as her mother, Dr. Nalini Vishwakumar. Lee Rodriguez and Ramona Young will return as BFFs Fabiola and Eleanor as well. Both love interests are also back, with Jaren Lewison as Ben and Darren Barnet as Paxton. Also, Richa Moorjani will return as cousin Kamala. And of course, John McEnroe, Devi's hero, will continue to narrate the show.

There will be new students this year as well. Megan Suri will join the cast as Aneesa, a new rival for Devi.

But the big news is that Season 2 has a new famous face. Iconic rapper Common will be coming aboard as Dr. Chris Jackson, described as "a debonair dermatologist" with a "high-end practice" who will be taking up residence in Nalini's building. Is he a rival? A new love interest for Devi's mom? Time will tell.

'Never Have I Ever' Season 2 Plot

Here's the official synopsis for the season, per Netflix:

In Season 2 of the Netflix coming-of-age comedy Never Have I Ever, Indian American teenager Devi (Maitreyi Ramakrishnan) continues to deal with the everyday pressures of high school and drama at home, while also navigating new romantic relationships.

Fans know one of the running themes of the series is grief. Both Kaling and co-creator Lang Fisher lost parents at a relatively young age, and Kaling has said that exploring growing up in that environment was something they were keen to explore.

With the potential for a love interest for Devi's mom, this season could address how family members struggle when one starts to move on before the other is ready. It also gives the show space to dramatize how grief doesn't come in linear form, but in sudden waves.

'Never Have I Ever' Season 2 Release Date

Never Have I Ever does not yet have an official release date. However, Netflix has confirmed the show will return in July 2021. All 10 episodes of the first season are currently streaming on Netflix.