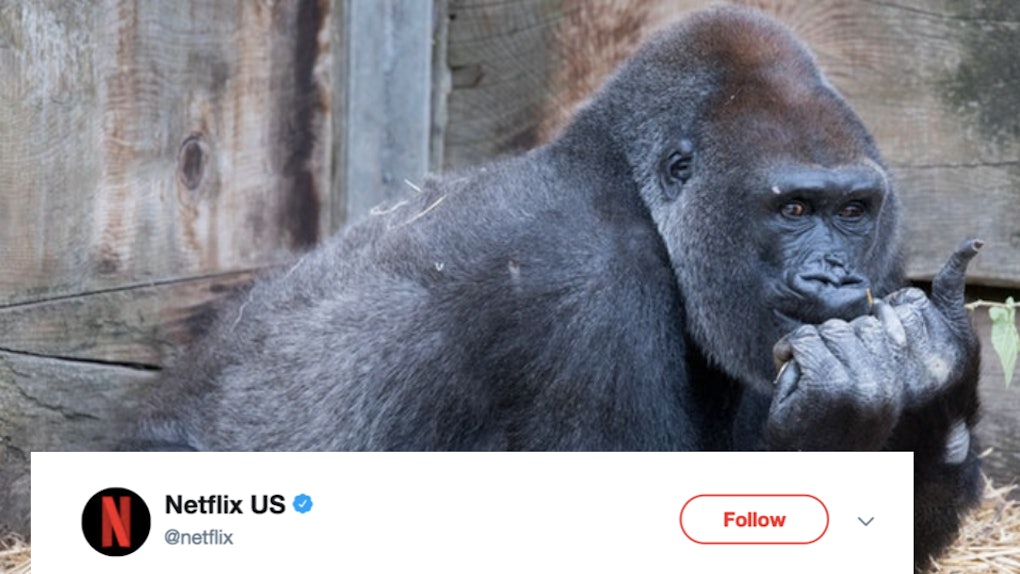 In case you've been living under a rock or avoiding the news as an act of self-preservation (respect), journalist Michael Wolff's book, Fire and Fury: Inside the Trump White House, was released on Friday, Jan. 5. The book was highly anticipated by much of the internet, and its release naturally sparked a ton of commentary, as well as jokes and memes. A number of big companies got in on the action, and Netflix's tweet about "The Gorilla Channel" gave us all a good laugh.

If you're confused about what The Gorilla Channel is and why Netflix would have to tweet about it, you're not alone. Allow me to explain: Upon the book's release, the Twitter account @pixelatedboat posted a fake excerpt, which claimed that President Trump was a frequent viewer of "The Gorilla Channel." According to the excerpt, on his first night in the White House, the president "complained that the TV in his bedroom was broken, because it didn't have 'the gorilla channel.'" The fake channel allegedly aired gorilla-based content 24 hours a day, and when President Trump's TV didn't have it, the excerpt claimed that White House staff created a makeshift gorilla channel featuring gorilla documentaries.

As much as Trump opponents wanted to believe that the ridiculous claims were true, they were not. Twitter user @pixelatedboat admitted that the excerpt was fake in both a tweet and their display name, which they changed to, "the gorilla channel thing is a joke."

Now stay with me, because believe it or not, we haven't even gotten into the true depths of the joke yet. First, a number of people believed that the excerpt was real, which of course led to even more jokes.

Then, there was commentary on what it means for us as a society that we believed this about our own president. Honestly, the fact that so many people were fooled is both a little bit scary, and a little bit sad.

Some people didn't find the joke all that funny, and noted the ethical concerns of releasing a fake excerpt in the era of "fake news."

Still, though, plenty of people joined in on the fun of The Gorilla Channel. A number of big companies even decided to get in on the joke.

Dictionary.com offered everyone a definition of the word "gullible," in a subtle but effective burn to everyone who believed the claims.

Animal Planet imagined what a Gorilla ChannGl would actually look like, and included an adorable clip of two gorillas playing.

VICE created an actual "Gorilla Channel" for everyone who thought that the channel sounded kind of nice.

Then, Netflix got involved. The media company tweeted asking people to stop calling to ask if they have "The Gorilla Channel."

Of course, this spiraled into even more jokes about whether or not the channel actually exists, and if Netflix was keeping it hidden.

And some people really want the company to make The Gorilla Channel a reality.

Honestly, I think The Gorilla Channel sounds like a great idea. It would be a nice escape from scrolling through my timeline and reading actual news about President Trump.

Fire and Fury has been in the headlines due to all of the inside information it provides on President Trump and daily operations in the White House. Most people have been anticipating incriminating evidence that the Trump administration colluded with Russia, or of any other illegal activity. Most notably, people have discussed a Steve Bannon quote from the book, in which the former Chief White House Strategist refers to a meeting between Donald Trump Jr. and a Russian lawyer as "treasonous."