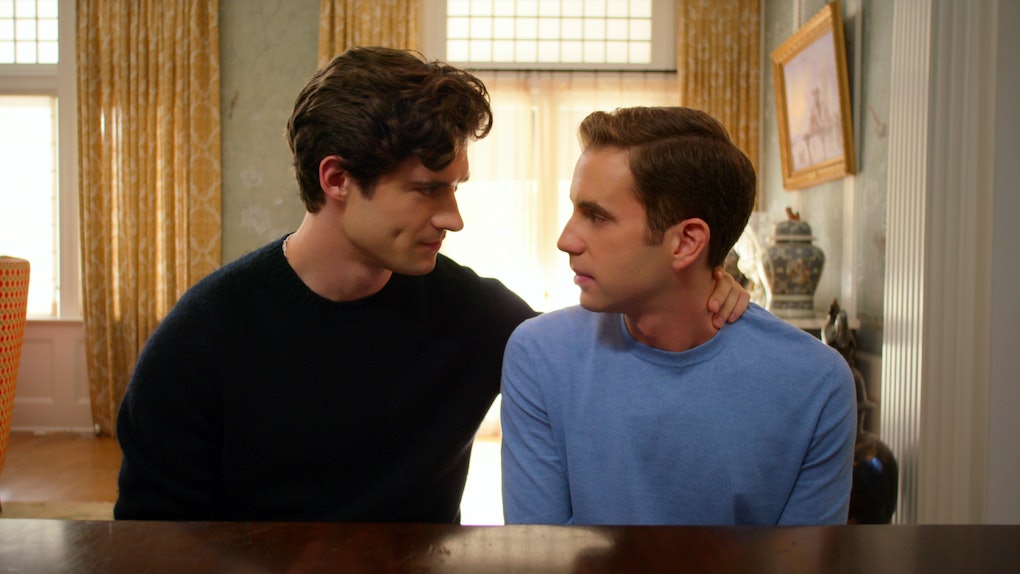 Netflix's 'The Politician' Season 1 Soundtrack Is Truly A Gift

The music in The Politician is as eclectic as the show itself. The new dramedy series is filled with a wide range of emotional moments, from over-the-top comedic highs to truly devastating lows. Luckily, Netflix's The Politician Season 1 soundtrack has a song to fit every mood, and it carries the audience through all the big feelings the show elicits. The songs in the show are pretty varied, touching on all different genres like indie pop, musical theatre, and disco. But one thing all the songs have in common is that they perfectly amplify each moment of the show.

UPDATE: As of Oct. 22, Ben Platt's covers from The Politician (including his duet with Zoey Deutch) are now available on all major music streaming services.

The Politician tells the story of Payton Hobart (Ben Platt) and his single-minded mission to become president of the United States... via his elite high school's class president election. Platt is a Tony Award winner for his lead role in the Broadway musical Dear Evan Hansen, so he definitely knows a thing or two about providing audiences with a satisfying musical moment. The series obviously takes advantage of his vocal chops by including his singing in the show. But truly dedicated fans of Platt will also notice that throughout a few episodes, Payton also plays selections from Platt's own song "Run Away," off his solo album Sing to Me Instead, on the piano.

The soundtrack to The Politician contains a wide variety of songs that play up the intense emotional beats of the series. The show's music supervisor Amanda Krieg Thomas explained in a statement that she wanted the soundtrack to have a "timeless" feel. She said:

It was a combination of vintage tracks and classic songs, as well as contemporary tunes, which really fits the vibe of the show. Musically it had to toe that line, but not in a way that's limited to any time period or genre. So artists like Shirley Bassey and Tame Impala and Sufjan Stevens can all exist in the same space, because one thing they all share is there is a timeless quality to them that crosses all different genres and periods. If there's a uniting thread across it all, that’s it.

If you're anything like the countless fans of The Politician who watched Season 1 in its entirety as quickly as possible, then you probably have its theme song stuck in your head. It's a snippet of the Sufjan Stevens song "Chicago," and serves as the perfect introduction to Payton and everything that makes up his identity. The song is also featured heavily in Episode 7, when Payton is driving his mom Georgina (Gwenyth Paltrow) to the train station. It fits in perfectly with the rest of The Politician Season 1 soundtrack, which is truly a gift to fans everywhere. You can check the full soundtrack out below, so get ready for a whole lot of musical theatre, pop, and a whole lot of Shirley Bassey.

"This Is My Life" - Shirley Bassey

"(Where Do I Begin) Love Story" - Shirley Bassey

"You Light Up My Life" - Debby Boone

"The Way of Vikings" - Amon Amarth

"With These Hands" - Shirley Bassey

"Unworthy Of Your Love" - from the musical Assassins, covered by Ben Platt and Zoey Deutch

"The Ballad of Booth" - from the musical Assassins, covered by Ben Barrett

"If You Go Away (Ne Me Quitte Pas)" - Shirley Bassey

"Between The Bars" - Elliot Smith

"A Woman, a Lover, a Friend" - Jackie Wilson

"He Would Have Laughed" - Deerhunter

"Pictures of You" - The Cure

"I Am The Changer" - Cotton Jones

Season 1 of The Politician is on Netflix now.