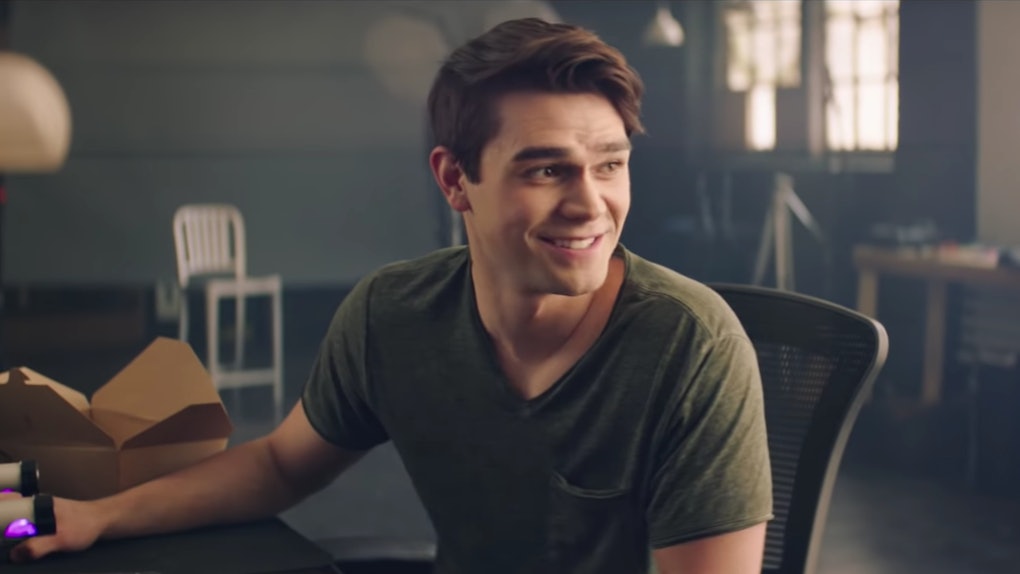 KJ Apa is stepping out of the dark, murder-y town of Riverdale and into the light for a breezy new Netflix romantic comedy that is guaranteed to be your summer obsession. Netflix just dropped the trailer for its latest teen rom-com, The Last Summer, which will star Good Trouble's Maia Mitchell and Teen Wolf's Tyler Posey alongside Apa. Netflix's The Last Summer trailer starring KJ Apa is packed with so much romance and drama that will get you pumped to watch it, and luckily, you will not have to wait very long to check it out because it will begin streaming in less than a month.

The newly released trailer introduces KJ Apa's character of Griffin, a recent high school graduate who is trying to use his last summer before college to win over his crush, Maia Mitchell's Phoebe. And it looks like Griffin faces another dilemma as well: he has a talent and passion for music, but has decided to study business in college for fear of not finding a career. Hmm, a teenager scared to pursue his love of music? Sounds a lot like something Archie Andrews went through as well.

Griffin and Phoebe's love story is not the only one at the center of The Last Summer. The new romance will also star Jacob Latimore (The Maze Runner) as Griffin's best friend Alec, who is hopelessly in love with Erin (Paper Town's Halston Sage). However, Erin begins to fall for a charismatic baseball player named Ricky (Tyler Posey), leaving Alec on the sidelines. Check out the full trailer for The Last Summer below:

Netflix also released a description of The Last Summer, which promises that the new movie will tie together multiple intersecting coming-of-age stories:

Featuring several intersecting stories, The Last Summer follows a group of recent high school graduates as they navigate their way through their final summer before taking off for college. As the youths wrestle with love lost and found, form friendships in unexpected circumstances, and take greater control in their relationships with parents, they ultimately decide who they will be and what they will do as they stand on the precipice of adulthood.

The Last Summer marks KJ Apa's third major film role. Prior to gaining fame in the lead role of Archie Andrews on Riverdale, Apa starred in the 2017 movie A Dog's Purpose. Most recently, Apa played Amandla Stenberg's boyfriend in last year's drama The Hate U Give.

Interestingly enough, many of KJ Apa's Riverdale co-stars are also helming romantic dramas this summer. Cole Sprouse recently starred in Five Feet Apart, Charles Melton is leading The Sun Is Also a Star, and Camila Mendes is getting her own Netflix romance with The Perfect Date. I guess after being around all those murderers, cults, and gargoyle monsters on Riverdale, it is nice to just bask in a summer romance for a while.

If you're already excited for The Last Summer, you will not have to wait too long to watch it. The movie begins streaming on Netflix on May 3.

More like this
'He's All That': Premiere Date, Cast, Trailer, Filming News, & More
By Dylan Kickham
Is Netflix Making A 'To All The Boys' Spinoff Series About Kitty? Here's The Tea
By Rachel Varina
Netflix's 'The Circle' Season 2: Release Date, Cast, Trailer, & More Info
By Ani Bundel
Stay up to date