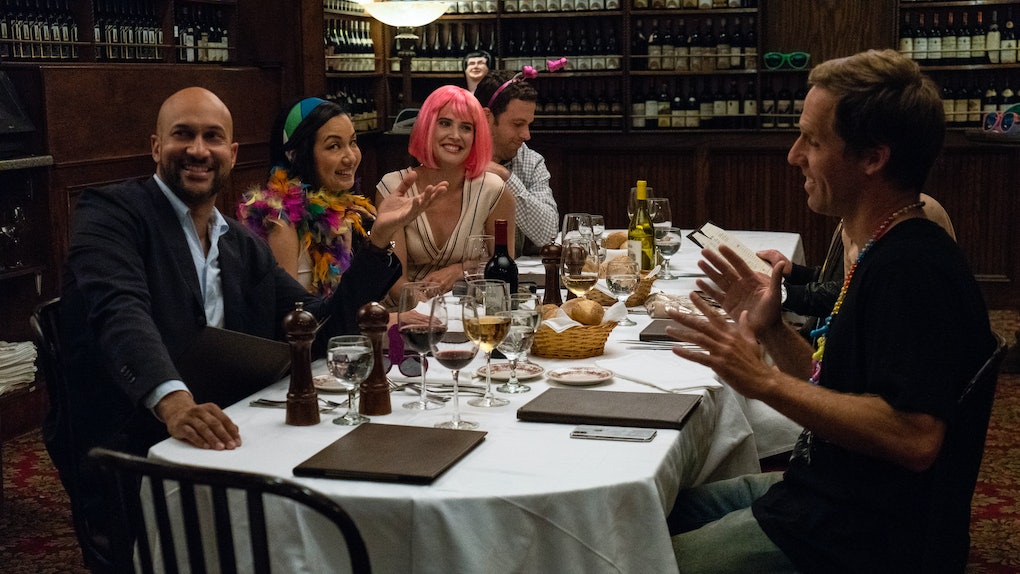 Netflix Canceled 'Friends From College' After Only Two Seasons, So Start Mourning

Time for one last round of goodbyes at the school reunion. Bidding farewell to old friendships and nostalgic romance is always tough, but it looks like we have to get used to it. After releasing two seasons of revived college hookups and drama, Netflix has canceled its comedy series Friends From College. Is it safe to assume this squad reunion doesn't have an after-party at a bar planned?

Only about a month after Season 2 of Friends From College hit Netflix, its co-creator Nicholas Stoller announced its cancellation on Twitter on Feb. 18. "Friends from College will not be returning for a third season," he wrote. "Thanks to everyone who watched it."

While sad fans responded to his tweet, Netflix then released an official statement about the show's end. As reported by Deadline, the message read:

The series debuted on Netflix in 2017, introducing fans to a group of Harvard alums in New York City who are reaching their 40s as their old friendships and romances complicate their lives. Friends From College returned for Season 2 in January 2019, rectifying its shaky first year when it delved into the friends' infidelity and feuding in a smoother way. The new season picks up a year after the first's endpoint, following the disastrous aftermath of the group learning about the affair between Ethan (Keegan-Michael Key) and Sam (Annie Parisse). While Ethan's wife Lisa (Cobie Smulders) has gone off the grid and Sam is trying to repair her relationship with husband Jon (Greg Germann), the estranged friends are forced to reunite for Max's (Fred Savage) wedding.

Your own gang of college friends probably hasn't reached this point of dysfunction yet, but watching Friends From College was definitely an entertaining way to boost your mood and know you hadn't hit rock bottom. While the majority of the cast has yet to respond to the cancellation on social media, the actors have previously spoken about the real-life friendships on the show's set. Ahead of Friends From College's Season 1 premiere, Key spilled about the filming conditions that helped the group bond, telling Entertainment Weekly:

We actually started [filming] in the party bus [from the "Party Bus" episode]. Misery loves company, so when you stick six people in a sweaty dark box with a fog machine for two straight days, something’s gonna happen ... We all walked out of that bus changed people ... We stepped out of that bus the best of friends.

Lovers of the series have also taken to Twitter to grieve about its surprise ending.

As of now, there are no hints of Netflix working on a finale special to wrap up loose ends, which isn't too fair for a college-themed show. We dedicate a whole week to graduation celebrations, so it doesn't feel right to say goodbye to the series so quickly. Even though we can't replay our actual college experiences infinitely, at least we can start another binge of Friends From College ASAP.

More like this
Netflix Renewed 'Bridgerton' For Seasons 3 & 4, Likely With More To Come
By Ani Bundel
These Movies & TV Shows Starring 'Shadow And Bone' Actors Are Far From Ravka
By Ani Bundel
6 ‘Schitt’s Creek' Spinoff Ideas That Are Simply The Best
By Rachel Varina
Stay up to date