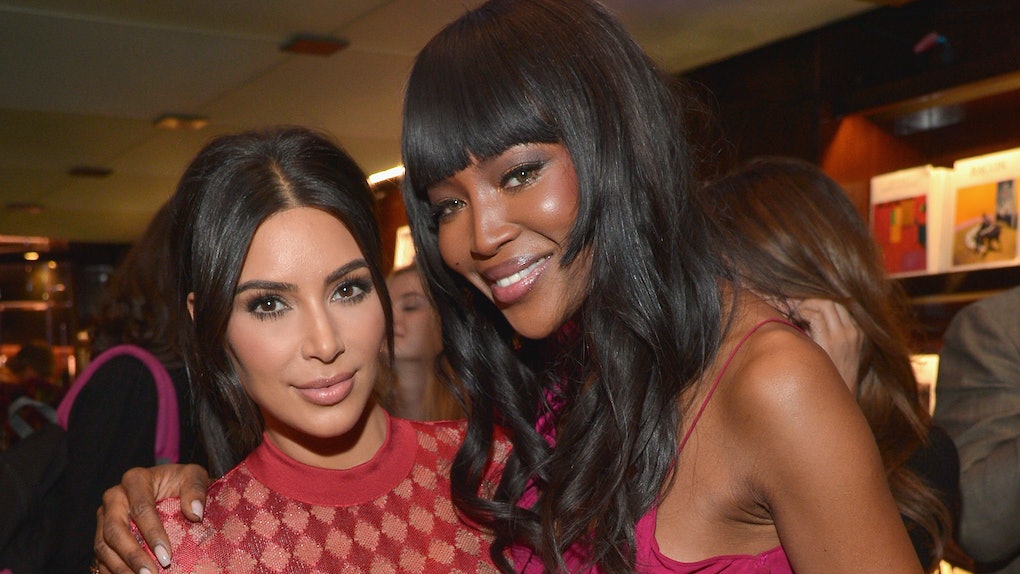 Naomi Campbell is saying "thank u, next" to any perceived Kardashian drama. The supermodel, who doesn't shy from giving a hilariously shady comment every once in a while, attended the TIME 100 Gala on April 23 celebrating this year's honorees, and while at the gala, she was asked about the things people are saying online about Kim Kardashian seemingly copying her past iconic looks. Naomi Campbell's response to a question about Kim Kardashian copying her style was quick and to the point, and makes it pretty clear that she's done answering questions about this topic. Cut, print, moving on!

Kim Kardashian has been making her love for vintage Versace clear over the last several months. It's actually not just vintage Versace she's sporting (she's also collaborating with Thierry Mugler by wearing their vintage pieces to public events and such), but Versace has been the most frequent. Combining the frequency of the Versace looks with Kardashian's comments about how much she loves them indicates that vintage Versace is her favorite thing to wear.

Campbell, however, modeled a lot of these Versace looks on runways when they were first created, and she has enjoyed a relationship with Versace over the years, sporting their dresses on many occasions. As Kim Kardashian was posting photos of herself wearing the various vintage Versace pieces, fans of Campbell couldn't help but notice that the looks Kardashian was showing off were frequently dresses Campbell wore first. Her fans felt Kardashian was copying Campbell's past iconic looks without crediting her for her trailblazing style.

Of course, the Versace designers made these looks, but part of what makes fashion iconic is the people who can rock the looks and make them iconic, so Campbell modeling these looks on the runways and sporting them in real life helped elevate the designs.

These are some of the looks fans accused Kardashian of copying without crediting Campbell.

Kardashian eventually responded to the criticism by posting a photo of herself in another Campbell-worn vintage Versace design and captioning the photo, "Naomi forever."

Taking a beat to speak with Entertainment Tonight on the TIME 100 red carpet on April 23, Campbell chose not to give this Kim K internet drama any of her time.

"Next question," Campbell said when asked about the Kardashian talk. It was classy of Campbell to simply decline to comment on this matter and shift the focus to her friend, Pier Paolo, who was being honored by TIME at the night's event.

"I am very honored that Pier Paolo asked me to be here with him tonight, especially this amazing, special night when he is being honored," Campbell said. "To be working with him has been a really great experience. Tonight everyone is here to see their friends being honored and to congratulate the people who deserve it around the globe."

I think we can take this to mean that Campbell is no longer going to worry about this Kim Kardashian drama. Kardashian credited Campbell's iconic fashion looks of the past (in, albeit, a vague and minimal manner), so I guess it's time to put this subject to bed. Campbell, justifiably, has clearly had enough of it.