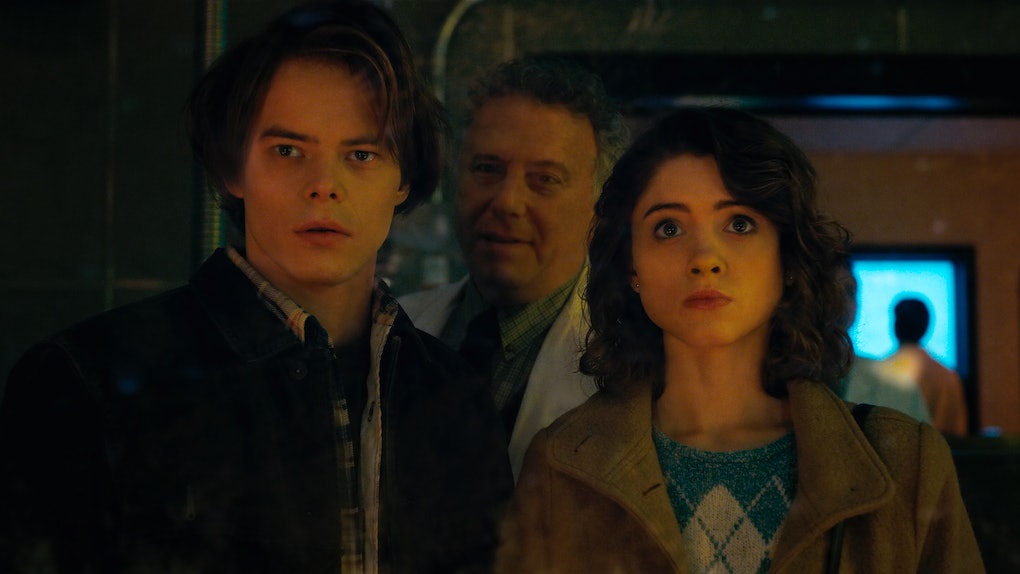 After a seriously long break, Stranger Things is back for its second season on Netflix and IT'S ABOUT DAMN TIME. Warning: The post has spoilers for Stranger Things Season 2. The new season is filled with plenty of new mysteries, new demonic monsters, and shocking new twists. What could possibly be more exciting than that, you ask? Well, let me tell you. Simply put: our two faves — Nancy Wheeler and Jonathan Byers — finally get together this season. That's right, Nancy and Jonathan hook up on Stranger Things and I repeat my earlier statement: IT'S ABOUT DAMN TIME.

For the last half of Stranger Things Season 1, there was no doubt we all wanted Nancy to get rid of Steve and give Jonathan a shot (almost as much as we wanted Barb to come back to life and Joyce to shampoo her hair). Alas, our dreams were crushed in the finale episode, though, when it was made clear that Nancy had chosen Steve over Jonathan. Thankfully, Nancy comes to her senses in Season 2 and sees how perfect she and Jonathan are together and they start dating. I'll admit it's a little sad because Steve isn't an a—hole anymore, but Jancy just has too strong of a connection to deny and, let's face it, they're a dream team that we've all been shipping since Season 1.

Though Nancy and Jonathan's relationship crops up pretty quickly in Season 2, it's not entirely shocking. Indeed, in an interview last August with ING, one of the show's creators, Matt Duffer, revealed his thoughts on the the possibility that Jonathan and Nancy would end up together this season. The executive producer said,

Jonathan is a complicated guy. He's not the smoothest when it comes to dealing with girls. He's never had - in my eyes anyway - he's never had a girlfriend. So he doesn't really know what the hell he's doing. Whereas Steve knows what he's doing. I feel it's very realistic. Some of it is just me still angry about High School, in a very immature way. I never got a girl in High School. It didn't happen. If Jonathan ends up getting Nancy that's like a fantasy to me - it doesn't feel very realistic. But maybe we can build to it.

Even Natalia Dyer, the actress who plays Nancy, felt the connection with Jonathan. In an interview with Teen Vogue last year, the actress revealed that Jonathan and Nancy were supposed to be together in Season 1, but other circumstances led her to end up with Steve Harrington. Dyer said,

I will say that, in the original pilot, Jonathan was the clear choice because Steve was just such a jerk. They ended up rewriting it because Joe is a very charming, nice guy and he's just too likable. They wanted to keep him around and explore his character. So she ends up with Steve at the end, and I think that's where she should be.

The actress went on, however, to hint that her character's relationship with Jonathan might flourish in Season 2, and boy was she right. Dyer said,

I'm not going to deny that there's obviously some kind of chemistry between Jonathan and Nancy. I don't think either of them know what it is, but I'd be excited to see where that goes in season two. We'll see. Again, I literally have no idea.

Now we can look forward to seeing how their relationship develops in Season 3. Until then, happy bingeing.