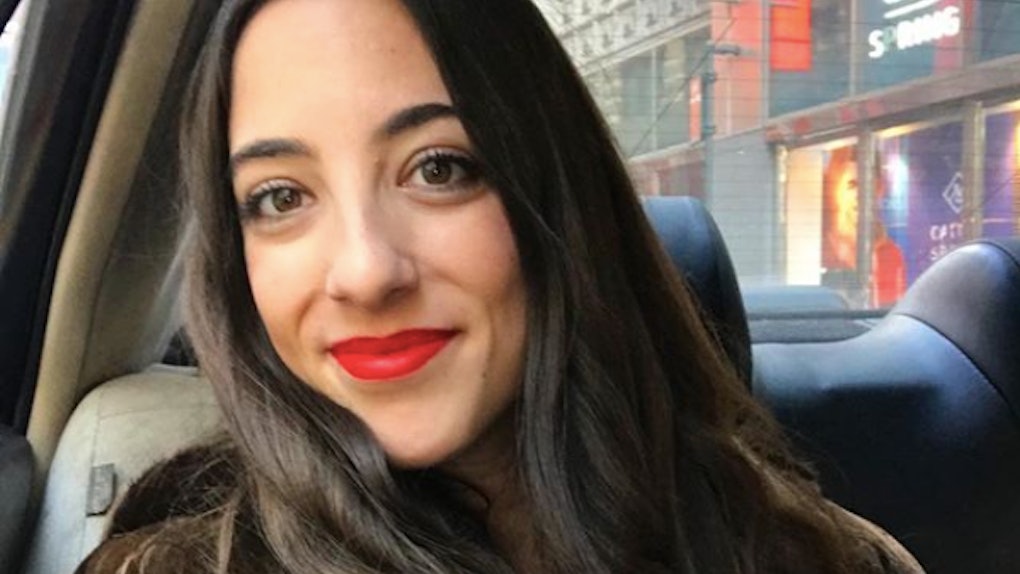 The text came from an unknown number. It was my sophomore year of college, and I was sitting in the middle of a history lecture, taking notes on my TA's presentation. I stole a glance at my phone. “Happy Valentine’s Day,” it read. I ran through a quick list of potential suspects, but realized that I had the names and numbers for my ex, crush, and most recent date all saved in my phone — so it couldn’t be any of them. Little did I know, that mysterious message led to my secret admirer standing me up on Valentine’s Day and kicked off a chain of events that honestly still confuses me years later.

I hid my phone under a notebook on my desk, and when my TA wasn’t looking, I tapped out a quick response. “Who is this?” I asked.

A reply came a few minutes later — just long enough to make my skin crawl with curiosity. “You don’t know who I am?” my secret admirer teased.

Again, I racked my brain for possibilities and came up short. I didn’t recognize the 347 area code, but a quick Google search told me it was a New York number. As an NYU student, that piece of information didn’t help me one bit; it could be anyone.

“I’m sorry, I don’t recognize your number,” I wrote back. I felt bad about the possibility of potentially hurting someone who assumed I’d remember them, but I didn’t know what else to say.

Soon, I got another response that read, “I guess you’ll have to figure out who I am in person. Can I see you tonight? It is Valentine’s Day, after all.”

“Sorry, I’ve got plans with a friend tonight,” I wrote back. “But maybe tomorrow night?”

We volleyed texts back and forth until we settled on meeting at my favorite wine bar not far from campus. I knew it was crucial to meet in public, and I felt better about setting the date on my terms. Even though I had committed to the plans, I felt overwhelmed with butterflies. Should I really show up? Who does that? And most importantly, who could this secret admirer possibly be?

On Valentine’s Day night, I got dolled up in a cranberry-colored dress. I squeezed into a tiny dorm bathroom with my best friend, Morgan, as we did our makeup. I was busy trying to find my one pair of non-ripped tights when I got a strange phone call — though this time, I knew exactly who it was from. My ex. He wanted to talk. We had been on-and-off for more than a year, and I wasn't in the mood to hear what he had to say. But I sunk down glumly onto the floor of my dorm's hallway, across from my hallmate Dylan Sprouse's room — that's NYU for you — and listened as he told me about spending Valentine's Day alone. He wanted to know if I had plans. I practiced self-restraint and held myself back from what I really wanted to say: I have a secret admirer. I have options. I don't have to go back to you.

Shaken by the call, I gathered my things and set out for the night. Morgan and I splurged on a plate of prosciutto and round of drinks at the fancy bar down the street, then made our way to the club 1OAK. (This was 2013, and I felt extremely cool because I had heard Scott Disick promoted parties there.)

As we danced at the club, I felt a tidal wave of confusing feelings: satisfied to be celebrating Valentine's Day in such a fun way with my best friend instead of my ex; thrown off balance by the sound of my ex's voice; excited but anxious about maybe meeting my secret admirer tomorrow. Maybe a mysterious new suitor would be exactly what I needed to move on from my ex for good. Inspired by that burst of optimism, I even worked up the courage to give my phone number to a cute guy on the dance floor. It was Valentine's Day! I was single! Why not?

The next morning, I felt groggy and my feet were sore from dancing, but I felt a real sense of anticipation: Tonight, I would meet my secret admirer. Sure enough, I had a text from him waiting in my inbox.

"See you tonight, Hannah," he wrote.

All day long, I felt jittery. I changed my outfit twice before settling on a cool, asymmetrical black dress and black heeled boots — I wanted to look more sophisticated than I felt. I met my friends in the dining hall before my date so I could anxiously shovel pasta in my face and update them on my exact whereabouts.

My friends promised to keep an eye on the time and text me for updates later that night. I was nervous, but I was as ready as anyone in my shoes could be. So, I headed over to the bar.

I arrived a few minutes early on purpose so I could explain my situation to the bartender, a 30-something blonde woman who squealed with delight when she heard what I was up to. She promised to watch out for me, and gave me the last two available seats: a pair of bar stools crammed into a cramped corner of the bar. I perched awkwardly on my seat and waited.

Every time the door opened, I swiveled my head to see if I recognized the person coming in — but I never did. At 7:05, I checked my phone, sure that he'd text if he was running a few minutes late. At 7:10, I contemplated texting him. By 7:15, the bartender approached me with two menus. "Just in case you wanted to order something while you wait," she offered.

I didn't order anything. Instead, I stewed silently, wondering if my secret admirer — whoever he was — was simply running late from work, or accidentally dropped his phone in the crack between the subway and the platform, or if he actually wanted to set me up for humiliation. I racked my brain for the hundredth time, but I truly had no leads on who could be texting me.

At 7:30, the bartender circled back to my stool with a generous glass of red wine. "I'm so sorry you got stood up," she said. "This one's on the house."

The wine was delicious, but I was too embarrassed to enjoy it. I slurped down half of it, tipped my fairy godmother bartender, and slunk out of the bar, head down to avoid making eye contact with anyone else there.

I assumed the story would end there. But a few days later, I got another taunting text from the same number: "So, what did you think when I never showed?" Other texts asked grossly invasive questions about my shoe size and whether one of my guy friends was circumcised. To make matters more confusing, Morgan started getting texts from the same number. While those first few texts on Valentine's Day had seemed entertaining and mysterious, these were cruel. I felt like a play-thing. I tried every trick I could find on Google about how to trace the source of the phone number, but ultimately, I gave up and blocked it.

In hindsight, I think I know where that text came from. After my breakup, I picked up the habit of spending most Thursday, Friday, and Saturday nights flirting with guys on every dance floor across lower Manhattan. There were times when guys bought me drinks and asked for my number before I realized I wasn't into them — and ditched. Not my most admirable move. I know. I wouldn't be surprised if a pissed-off dude decided to give me a taste of my own medicine. I had slipped away from guys at bars when I didn't feel a spark; I hadn't truly considered until this moment how much it sucked to be on the other end of the equation.

The whole confusing situation taught me another lesson, too: Even if the story ended in a dark and disappointing way, the adrenaline rush of a having a secret admirer (however briefly) gave me a taste of adventure, romance, and fun first-date jitters. I realized I didn't need an anonymous stranger to create that feeling for myself. So, I downloaded a new app called Tinder and started swiping — this time, with names and faces attached.