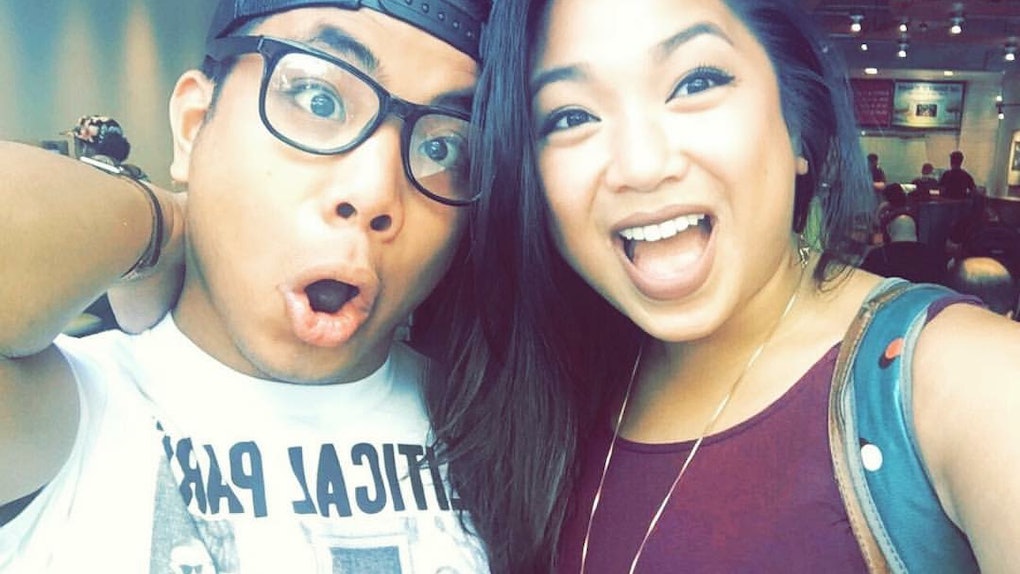 When people ask me who my best friend is, my little brother, Jon, is always the first person who comes to mind. There are a million reasons why my little brother is my best friend, and I'm so lucky to have him in my life. Because we've been joined at the hip since day one, we've built a bond that even I don't understand sometimes.

Jon and I were in a theater class together in high school. (I was a junior, and he was a freshman.) During our first week, we did a ton of ice breaker activities to get to know everyone in the class. For one ice breaker, we played a "getting to know you" game where everyone was asked the same question, and we all walked around the room trying to remember as many answers as we could. The first question was, "What is the name of your best friend?" Not sure if it's because he was in the room, I immediately thought, "Jon." As I walked around the room and collected answers from my classmates, one of my friends told me quietly, "You know Jon has been saying your name, too?"

Jon and I were practically raised as twins. We're only a year and four months apart in age, and we did pretty much everything together. If he joined the YMCA basketball team, so did I (Yes, I was on the boys' team.), and if I joined the church choir, he did, too. There was one point where my parents even dressed us up in matching clothes and matching haircuts. (No joke.)

Even when he's being annoying, I know that he'll always be there for me. Here's why my little brother is my best friend — and I'm not embarrassed about it one bit.

1. We Literally Grew Up Together

Sometimes, it can take some serious digging for me to open up about my family or personal life with other people. But with my brother, I don't have to worry about explaining anything — he just gets it, because he was there the entire time. I love that we can vent to each other (and our older sister) about our parents, and if we need some backup, we've always got each other's backs.

2. We Have Similar Interests

I don't know why we both fell into the arts, but it somehow happened, and it's a passion that we've shared since we were kids. We began singing in church choir together, then did the same community theater shows. He also followed me to my performing arts magnet middle and high schools.

Even though we don't perform together much anymore, we can still talk to each other as people who understand the music and entertainment industries. Of course, we still occasionally put silly singing videos together.

3. He Keeps My Weirdness In Check — And Sometimes Matches It, Too

If you can't be goofy around your little brother, who can you be goofy around? We're serious people (for the most part), but we know that the other person won't judge us if we're a little weird and goofy at times.

4. I Know He'll Be There For Me Through Anything And Everything

Jon took off from school in NYC to come up to Boston and sing in my senior recital with me. That's some love right there. Even though he doesn't say it, I know that he'd drop everything if I told him that I needed him. He also always keeps me in check if he thinks I'm making the wrong decision or being dramatic (which is often).

5. No One Makes Me Prouder

I cried when my little brother booked his first Broadway show, and cried when he took his bow on opening night. Basically, I cry pretty much any time he tells me good news about his life or his career. I love bragging about him, and I know he feels the same way about me. It's always such a joy to see people you love succeeding in life, but it's even better when it's someone you've known (and teased) your entire life.

6. He Always Loves Me, Even If I'm Being Annoying

Jon can be a little camera shy, but he knows that I love pictures and will (usually) take a picture with me if I ask him to. I'd like to think that he only does it for me because I'm his sister (and self-proclaimed best friend). A major bonus of having a best friend who's also family? He's stuck with me forever and ever.

Like every friendship, my brother and I have our ups and downs. But we understand each other in a way that I don't think anyone else does, and that's why we'll be best friends for life.