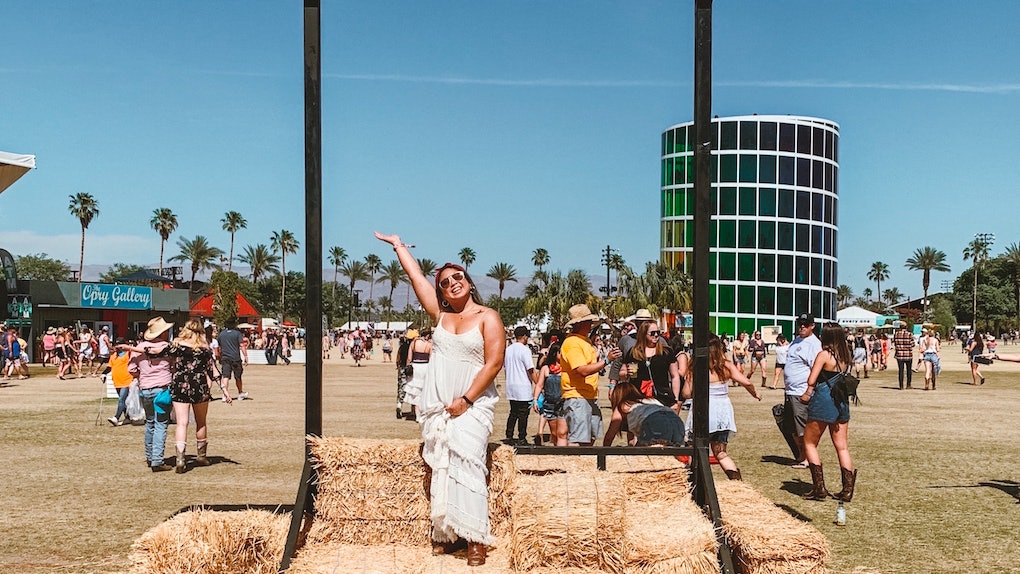 I grew up writing and playing music. I like to think that I have a pretty well-rounded outlook on a lot of different genres — especially because I went to music school. Even though I'm from the South, one type of music that's taken me quite some time to learn to love is country. But my first time going to Stagecoach gave me a newfound appreciation for country music, and I think I'll be enjoying the genre for years to come.

My boyfriend is a freelance drummer who regularly plays with country artists based in Nashville, so I actually started listening to country music a lot more because of him. I began streaming hits by Carrie Underwood, Sam Hunt, Lauren Alaina, and Thomas Rhett to learn more about the genre. Going to Stagecoach exposed me even more artists from all across the different sectors of country music — from rockabilly, to outlaw country, to country pop.

Stagecoach allowed me to spend a whole weekend immersing myself in California's version of country culture. I had such a fun time doing it that I'm convinced I need to go back again next year — and here's why you should, too.

The festival grounds in Coachella Valley turned into a country-themed oasis for the weekend.

I attended the second weekend of Coachella, and just a few short days later, turned around and made the trip back to the desert from LA for Stagecoach. One of the things I loved about Stagecoach was that it was set up similarly to Coachella, so it felt familiar, but was totally different. The giant Ferris wheel and rainbow Spectra tower were there to stay, but in place of the cactus sculptures and teepee huts were flashing neon signs, trailers, and naturally, a giant cowboy boot.

It was a lot of fun completely embracing country music vibes for a weekend.

Festival-goers don't hold back on the outfits when they head to Stagecoach, and I was totally ready to keep up. I went all-out with my wardrobe — and even bought an amazing vintage leather fringe jacket that I'm obsessed with. I slid into a pair of cowboy boots, put on a cowboy hat, and felt set to take on the entire weekend.

The Southern eats at the festival also didn't disappoint. I enjoyed barbecue and mac and cheese, and even drank beer — even though it's usually my last choice of alcohol when I'm going out.

Of course, a huge part of festival culture is capturing some fabulous #content, and I loved coming back to the desert for a second weekend to snap more pics for the 'Gram. I always think it's fun to show off my outfits for special events, especially when I put so much time and effort into planning them over the course of the weekend.

I got a Chevy Colorado pickup truck for the weekend to cruise to and from the festival in style.

I felt awesome rolling up to the festival in a proper whip. My boyfriend and I got a Chevy Colorado for the weekend to get into the spirit of the festival. Showing up in a bright blue truck was one of the highlights of my entire weekend, especially because I was able to have a fun mini photo shoot with it; the iconic Palm Springs Windmills served as the best backdrop.

I was honestly a little intimidated driving it at first — it's definitely the biggest vehicle I've ever had to drive — but it was surprisingly easy to handle, and truly made me feel like a rockstar. There was something so special about wearing my leather fringe jacket, daisy dukes, and cowboy boots while sitting in the driver's seat of a diesel pickup.

My boyfriend was so excited for us to go to Stagecoach, because he wanted to show me everything he loves about country music. In preparation for the festival, he created a huge Spotify playlist of all of the artists playing for us to listen to on the two-hour drive there. We used the truck's Apple CarPlay feature to blast the music from our phones while keeping the Google Maps app open (because I am someone who easily gets lost).

Though I probably won't buy a pickup truck in the near future, the Chevy Colorado was the ultimate ride to get us to and from the festival.

I'm so glad that I was able to share the weekend with my boyfriend who loves country music.

Of all the musicians I know, no one loves country music more than my boyfriend. He loves the culture of country music in Nashville — and even lived there a few years back — so he was the obvious choice for my festival companion. This was our first music festival together, and even though I'm not a huge country music fan, it was really special experiencing this with him, listening to the music he really loves.

I will definitely be heading back to Stagecoach in the future.

I never expected to love going to a country music festival as much as I did. Stagecoach is a music festival experience unlike any other, and I genuinely believe that you don't have to be a country music lover to be able to enjoy it. It's meant to be a fun, immersive experience. And even though it took me out of my comfort zone, I had a blast getting into it and trying something new. You best believe that I'll be heading back there again soon, and I hope you'll join me next year.

More like this
BTS' Inkbox Temporary Tattoos Collection Is "Dynamite"-Inspired, So Take My Money
By Marisa Casciano
How Bahari Became Instant BFFs After Starting Out In Different Parts Of The World
By Kaitlin Cubria
How To Do Olivia Rodrigo's "Deja Vu" Challenge On TikTok Like Charli & Addison
By Rachel Chapman
Stay up to date