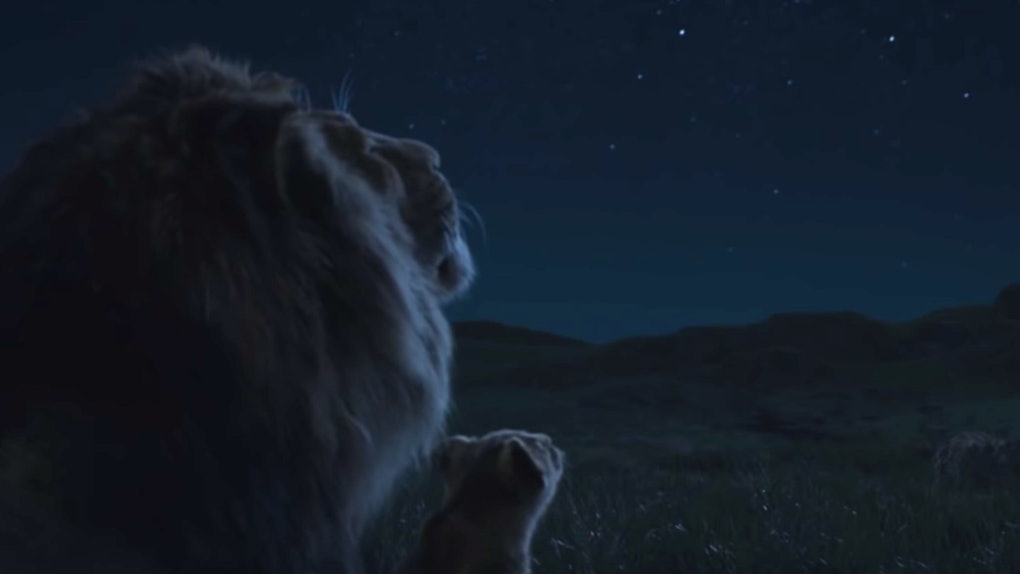 The Lion King moment we've all been waiting for is finally here: Mufasa's "Circle of Life" speech in the new Lion King trailer! What a gift this is. The trailer is a new TV spot that features the queen Bey and Donald Glover singing "Can You Feel The Love Tonight" while James Earl Jones is heard delivering Mufasa's iconic speech. This is literally the only thing I've been waiting to hear ever since this movie's cast was announced, so I can now die happy. Yes, it will give you all the feels. And no, you are not ready.

The trailer starts with a shot of the night sky above the Tree of Life. Then comes the shot of baby Simba that's been in every trailer the film has released so far, followed by an adorable shot of Mufasa and Simba sitting together at sunset. It seems like most of these shots are from the scenes leading up to Mufasa's speech to Simba after the hyena incident.

"Simba, look at the stars," James Earl Jones' voice is heard saying. "The great kings of the past look down on us from those stars. Those kings will always be up there to guide you, and so will I."

Overtop this father/son moment, Beyoncé and Glover (who play the grown Nala and Simba) sing, "Can you feel the love tonight? / The peace the evening brings / The world for once in perfect harmony with all its living things." And no, I am not all right!!

Another (slightly longer) version of this trailer was released on June 20, and people on Twitter were freaking out over finally hearing Beyoncé's vocals.

Beyoncé seems just as pumped for this movie, seeing as she literally dressed as Nala for Tina Knowles Lawson's Wearable Art Gala.

Her majesty, the lion queen.

People dropped comments like, "Ok Nala we see you," "LIONESS," and Goddess! Right off the Pride Rock!!!" in the comments section of Queen Bey's post, but my favorite part about this Wearable Art Gala event is that it featured a performance from the Lion King Broadway cast. A Beyoncé and broadway crossover?! Those are, quite literally, my two favorite things.

Let's get back to the new trailer, though. It also showed a clip of adult Simba and Nala, no doubt from one of the "Can You Feel The Love Tonight" shots. Honestly, if you're not pumped for this movie yet, I really don't know what to tell you. It has one of the most star-studded casts I've ever seen in my life.

James Earl Jones returned to reprise his role as Mufasa, Chiwetel Ejiofor is Scar, Billy Eichner and Seth Rogen are Timon and Pumbaa (respectively), John Kani (who played T'Challa's father in Black Panther) is Rafiki, John Oliver is Zazu, Alfre Woodard is Sarabi, and that's not even where the amazeballs list of cast members ends! If you're counting the minutes until the Disney classic drops, tickets luckily became available to purchase on June 24.

More like this
Where Is The 2021 Oscars Ceremony Being Filmed? The Location Is So Different
By Umber Bhatti
Zendaya's Instagram About Voicing 'Space Jam: A New Legacy's Lola Bunny Is A Throwback
By Abby Monteil
Kanye West's New Netflix Docuseries Sounds Epic, But Will It Feature Kim Kardashian?
By Brandy Robidoux
Stay up to date