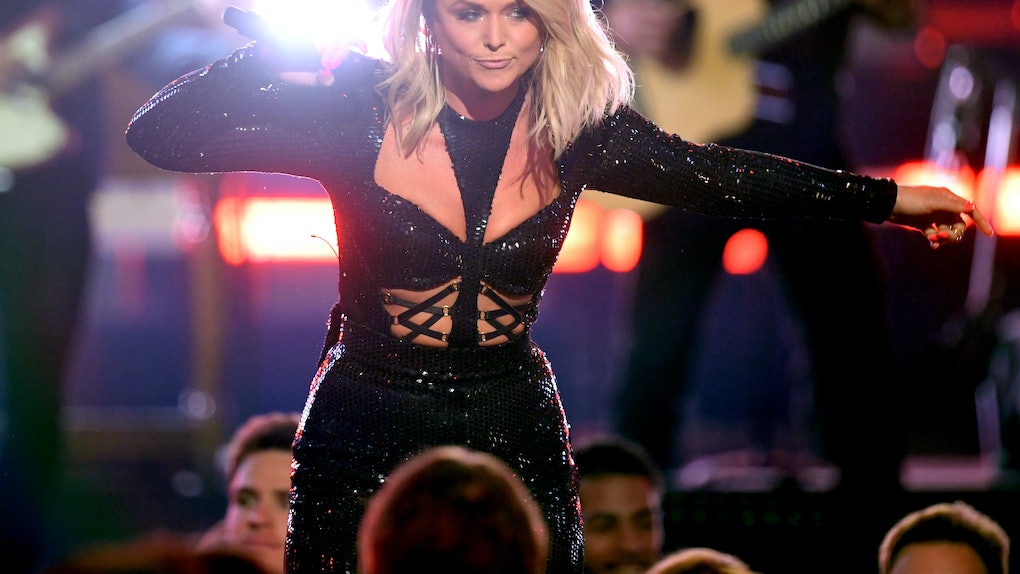 When former country music power couple Miranda Lambert and Blake Shelton broke up in 2015, fans were shocked. Many people felt the two were totally meant to be. However, now that they're not together and they've both moved on to new romances — he with Gwen Stefani, she with Brendan McLoughlin — all is well. Or, it seemed like it was. In what might be the ultimate power move, Miranda Lambert's ACM Awards 2019 performance totally threw some shade at her ex-husband, Blake Shelton, and he was in the audience — with his new girlfriend. It was intense.

The Academy of Country Music Awards went down on Sunday, April 7, and while the night was filled with incredible performances and jaw-dropping red carpet moments (looking at you, Kacey Musgraves), there was one moment in particular that had everyone talking. When Lambert took to the stage to perform her hit song, "Little Red Wagon," she changed one pretty major lyric.

Originally, the song goes like this: "Oh, you only love me for my big sun glasses / And my Tony Lomas / I live in Oklahoma / And I've got long, blonde hair," but Lambert — who is from Texas and moved to Oklahoma when she got together with Shelton — decided to go for it. Instead of singing, "I live in Oklahoma," she belted out, "I got the hell out of Oklahoma," as Cosmopolitan reported.

Honestly, it's understandable. The breakup was super public, as all celeb breakups tend to be, and Lambert has had to deal with the world knowing her business since it all went down. Specifically, Shelton and Stefani got together only a few months after his split with Lambert in 2015, which may have been uncomfortable for Lambert. In fact, Stefani and Shelton confirmed their relationship in November 2015, four months after Shelton's divorce from Lambert was finalized. Really, no one could blame Lambert if she's a little salty even though she has moved on herself.

Lambert attended the event on Sunday night with her new beau, Brendan McLoughlin, marking their first red-carpet appearance together. Fans will recall that Lambert announced she and McLoughlin had married earlier this year and the 35-year-old singer shared the happy news with an Instagram post. "In honor of Valentine’s Day I wanted to share some news," Lambert wrote alongside two sweet photos of the happy couple on their wedding day. "I met the love of my life. And we got hitched! My heart is full. Thank you Brendan Mcloughlin for loving me for.... me."

Clearly, Lambert is happy. But that doesn't mean she isn't entitled to a little good, clean fun every now and then. She was with Shelton for nine years, and so if she wants to joke that she finally got out of Oklahoma, then she should!

On the other hand, it was likely an awkward moment for Shelton and Stefani, who also attended the show together. However, according to Cosmopolitan, the camera managed not to show Shelton and Stefani as Lambert threw her shade, so the world may never know what their reaction was. Nevertheless, it was an iconic moment, and Lambert definitely stood her ground.