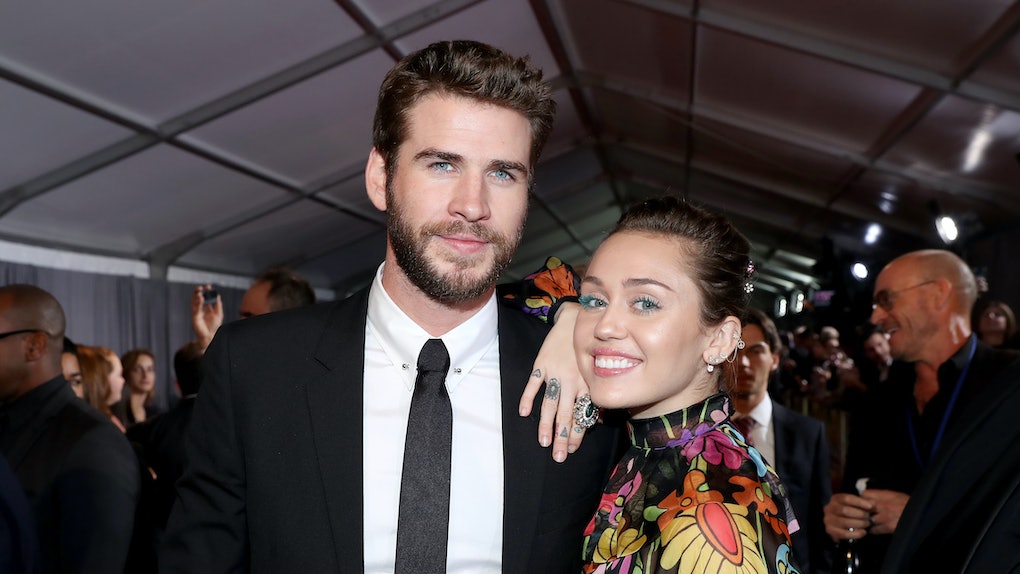 If you’re a Miley Cyrus and Liam Hemsworth stan, then chances are this has been a real roller coaster of a month for you. On July 13, Cyrus up and deleted everything off her Instagram. Folks immediately jumped to the conclusion that this digital purge must spell doom for her and long-time boyfriend, Hemsworth. Fortunately, the couple refuted the breakup rumors with an adorable video on Instagram. Whew. But why would people immediately be so fatalistic? Well, it could be that they've taken a look at Miley Cyrus and Liam Hemsworth's astrological compatibility, or perhaps they've just followed the ups and downs of the couple's romantic history. Let's be honest, it’s been rocky.

If you haven't been keeping up, here's a little back-story. Cyrus and Hemsworth first met on the set of their film The Last Song in 2009. It didn't take long for rumors of them dating to begin circulating, and in 2010, they made their official red carpet debut as a couple. They split for the first time that August, citing their busy schedules. A month later, things between them seemed to be back on track, but they confirmed it was a wrap on the relationship again that November.

Of course, that wasn’t really the end of the road for these two, and in June 2012 the couple announced they were engaged. Then, they rode off into the sunset together. Just kidding! In August 2013, they made their last public appearance together before breaking up again. Three years and various versions of Miley later, in January 2016, she was seen wearing her engagement ring again. Sources confirmed to People that the couple was back together, and yes, engaged again.

So, could some of these ups and downs have been predicted by the stars? Miley’s birthday is Nov. 23, making her a Sagittarius, and Liam was born Jan. 3, which falls under the sign of Capricorn. These signs may be neighbors, but they are the very definition of opposites attracting. Here’s what we can infer about their connection, based on their signs.

Their connection will have to weather challenges if they're going to make it.

Sagittarius and Capricorn are the very definition of opposites attract, because their world views and attitudes could not be more contrary. Sagittarius is spontaneous, freedom loving, and wild at heart. They don't want to rush into a commitment, and any pressure to do so often has the opposite effect. Capricorn, on the other hand, is very practical, productive, and disciplined. They are very careful with their heart, but ultimately, when they find someone they connect to, they want security and commitment.

The trouble this may cause is pretty clear. However, this pairing can go one of two ways: Either there is initial passion that ultimately blows up and doesn't work out, or both partners are equally interested in compromising and finding balance. Capricorn helps to ground Sagittarius, and Sag helps Cap lighten up and experience more adventure and excitement in life.

The fact that Cyrus and Hemsworth seem to split up but always find their way back to each other likely means they feel this friction, but the draw and connection is powerful enough that they may be able to find that delicate balance.

In order for the relationship to succeed, they need a shared goal.

Capricorn and Sagittarius have a much greater likelihood of success if they have a shared goal. Both signs are very ambitious and motivated, and if they can get on the same page about something important, like a shared vision of the life they want to build together, that can actually help bridge their differences. They can discover in each other's strengths and weakness what the other has or lacks, and when connected, fill those voids. This can create a powerful bond that even their opposite natures can't break apart.

Love can really conquer all, for these two — if they put in the work.

There is one more factor to consider when looking at Cyrus and Hemsworth's compatibility that won't show up in their character traits, and that's love. Yes, it's a bit cheesy to say that love can conquer all, and while that may not actually be true, it can put a heavy thumb on the scale — one that can actually allow opposites to smooth over the rough edges and find a way to be powerfully compatible after all. How that tends to work for this astrological pairing comes down to magnetism and attraction.

Sag is often drawn to Cap’s shyness, which creates the desire for Sag to break down that wall and discover what is behind it. For Capricorn, the draw of Sag’s adventurous and fearless spirit is powerfully appealing and intriguing. It may be hard to break out of their natural disciplined nature, but if there's one thing Cap loves, it's a challenge.

The key is just to find a balance. Success ultimately depends on Sag’s willingness to settle down and give Cap the security they require. Fortunately, Sag is actually a really flexible sign. While they definitely tend toward fickleness and fear of commitment (which may explain why Cyrus is in no rush to actually tie the knot), when they find the right partner, they are capable of settling down for the long run.

Ultimately, this pairing is not one of the easiest or most successful in terms of compatibility. However, it’s not the worst, either. What is most important is how much each person wants the relationship to work, and how willing they are to make the sacrifices it will take to make it happen. From what we can tell, based on how they seem not to be able to stay apart for long, the prognosis is looking good for Miley and Liam.