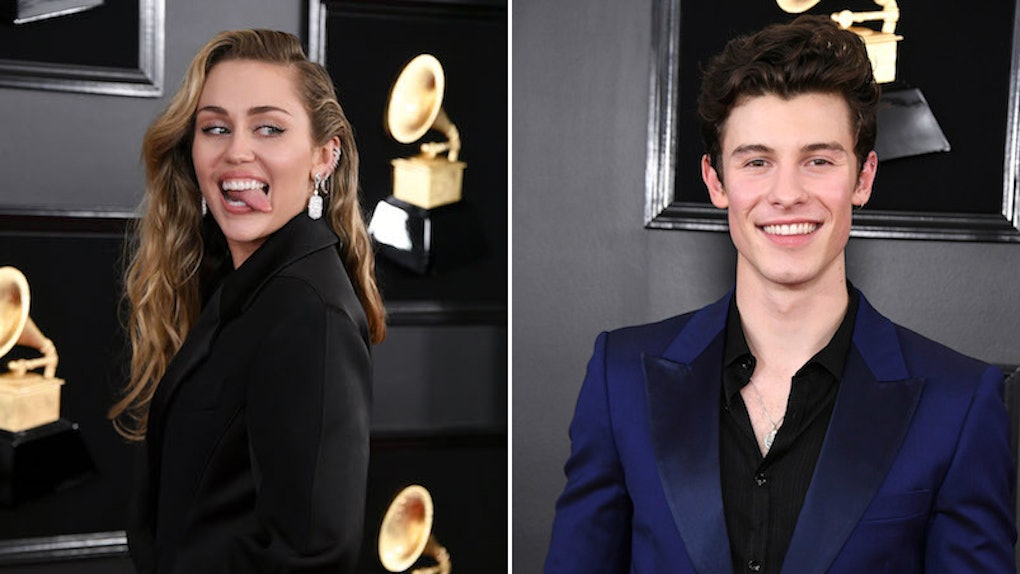 If you have eyes, then you've probably seen singer Shawn Mendes' new campaign for Calvin Klein, which features him showing off his, erm, assets in Calvin Klein boxer briefs. It's all very steamy, and his abs alone will probably make you thirsty. But there's one person who is here for nothing but jokes, and that person is Mendes' friend, Miley Cyrus. Our girl came for Mendes in the funniest way possible, and it's Miley Cyrus' joke about Shawn Mendes' Calvins ad that will make you actually laugh out loud. Plus, it involves Lady Gaga, so really, how can you not want to continue reading?

Keep in mind, though, that Mendes and Cyrus have been working together a lot recently, which makes sense considering the two did a duet at the Grammys with one another (wearing matching vests, mind you). If you're wondering just how their friendship started, Cyrus told Variety that it began like so many other relationships — through a DM on Instagram.

"I actually sent him a DM and said, I don’t know what you’re trying to do next because I’ve actually been in his position in his career too before, where you’re someone who I think is trying to fit into pop music... but you don’t want to be conformist and you want to do your own thing," Cyrus told Variety. "I love the way that he always kind of plays alternative pop because it’s something that I love to do."

So cute. But let's get back to an underwear-clad Shawn Mendes, shall we?

On Feb. 16, Mendes took to social media to show that he was the new face (and I guess body?) for Calvin Klein, tagging the fashion brand on Twitter and using the hashtag, #MyCalvins, and it is... sensual, to say the least:

Naturally, friends and fans of Mendes couldn't help but share their thoughts on the new campaign, and it seems that the majority of people are salivating because LOOK AT THAT PICTURE.

But rather than melt into a puddle of desire like the rest of the world (I mean, she's married to Liam Hemsworth, so when it comes to rock hard abs, she's most likely totally desensitized), Miley Cyrus decided to spin things around a bit. She took to Twitter and her Instagram Story to share an old photo of herself posing topless in Calvin Klein boxer briefs, and put it side-by-side with Mendes' new campaign photo. She put emoji hearts over both her and Mendes' nipples, because you gotta keep things G-rated for Insta and Twitter (big sigh).

"Don't leave your children with Miley," she wrote on the side-by-side collage, and it is an actual treasure to see:

While the comparison is funny all by itself, there's actually another joke going on. Way back in September 2013, Lady Gaga shared a photo of herself with a young and innocent-looking Miley Cyrus on Twitter. "DO NOT LEAVE YOUR CHILDREN WITH LADY GAGA," Gaga tweeted, and the photo itself is an actual gem:

I wholeheartedly appreciate the levels and levels of joking that's going on here, and we have Miley Cyrus to thank for it. If you're wondering what made her post the side-by-side, there's no true answer other than, "Oh, she's just being Miley."

More like this
I Tried Singing While Running Like Miley Cyrus & OMG, My Lungs
By Rachel Varina
Demi Lovato Said She Won't Share Details About Her Recovery Again After Being Criticized
By Brandy Robidoux
How Bahari Became Instant BFFs After Starting Out In Different Parts Of The World
By Kaitlin Cubria
Stay up to date