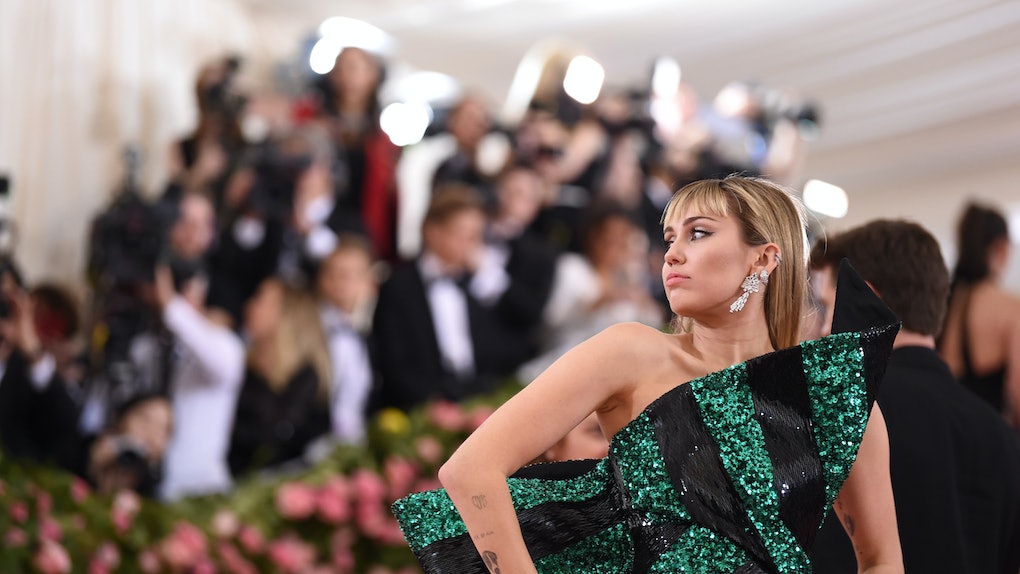 Take one look at Miley Cyrus' Instagram and you'll probably be filled with jealousy and longing. I'm talking about her posts from the Grand Canyon, featuring poolside shots showing off her ridiculously toned abs and some incredibly cute puppies. In addition to her enviable Instagrams, she is — as always — unafraid to be vulnerable. On Sept. 30, Miley Cyrus' cryptic quote about love kept things real with her 99 million followers.

In an Instagram Story, the singer wrote a one-paragraph message about love, including the kind of love she feels when she is surrounded by four-legged friends. Soon, however, she pivoted to talking about love and, more specifically, unconditional love, that she said animals are capable of. "The best part about animals is that they are careless about the details. They live by the golden rule … Love & Be Loved. Nothing in between. No questions regarding wealth, career, talents, race, age, sex .... They love 100X... all [animals] ask is to be cared for in exchange for loyalty, reliability and faithfulness. (reminds me of someone)"

It's these last four words that have the potential to raise a few eyebrows. Is she talking about someone in particular?

Cyrus' relationships have been a very public topic of discussion over the last few months. On Aug. 10, a rep for Cyrus told People that the singer was separating from Liam Hemsworth. The same day, photos that appeared to show Cyrus kissing Kaitlynn Carter were published on Entertainment Weekly. On Aug. 21, TMZ reported that Hemsworth filed for divorce. So, the post could really be talking about either one of the singer's two recent exes. In a People article, however, an unnamed source claimed that Carter and Cyrus are "still friends," and that their breakup was amicable. If that's true, it's possible the message may be aimed at Hemsworth.

This isn't the first cryptic message Cyrus has posted following her breakups either. If fans look closely (as they probably have) they can notice a number of empowering, Lizzo-style captions that focus on moving on and being better off.

"Goodbyes are never easy... but g2g," Cyrus captioned her latest Instagram where she's standing with her back to the camera with her hands raised up, obviously enjoying the day.

Whether she's posting about Carter, Hemsworth, someone new, or no one at all, Cyrus seems to be doing just fine.