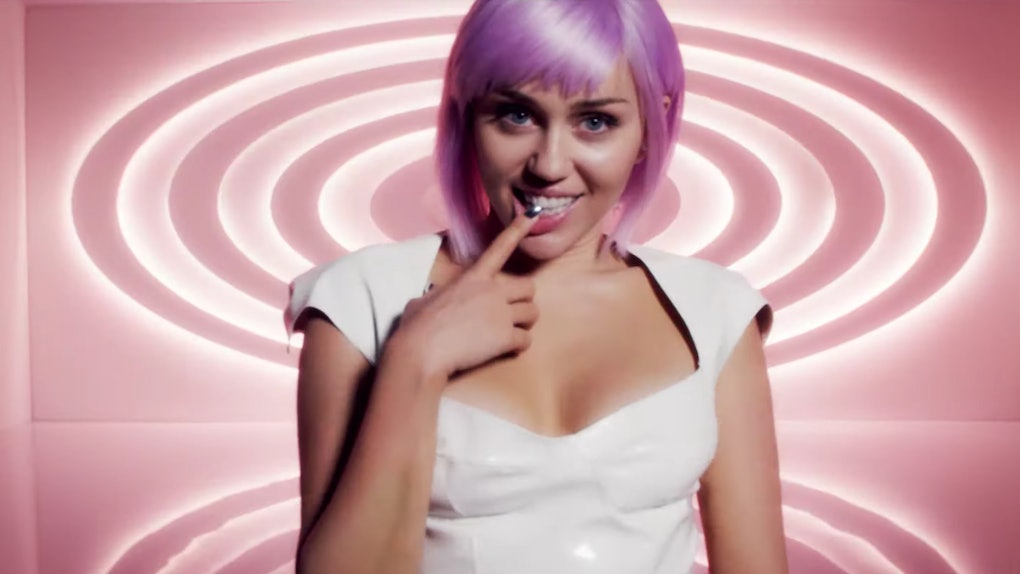 Ever since Black Mirror released its fifth season last week, fans have not been able to get the songs of fictional pop star Ashley O out of their heads. It should come as no surprise that Miley Cyrus can churn out catchy pop songs even as a made-up, wig-wearing singer ("Nobody's Perfect" is the bop of the century, after all), and she proved her prowess yet again with her character Ashley O's big hit track "On a Roll." Sadly, the episode only showed a snippet of Ashley O's music video, but now the music video for Miley Cyrus' Black Mirror song "On a Roll" has been fully and officially released, so fans can get the full Ashley O experience.

The song "On a Roll" plays several times throughout the newly released Black Mirror Season 5 episode "Rachel, Jack and Ashley Too," in which a shy teenager obsessed with the pop star Ashley O stumbles into a nefarious plot that threatens Ashley's life. "On a Roll" is shown to be Ashley O's biggest hit song, and the inspirational pop tune is actually pretty reminiscent of the songs that Miley Cyrus released as Hannah Montana back in the day. The big difference, however, is that "On a Roll" is actually a remixed and rewritten cover of the 1990 Nine Inch Nails song "Head Like a Hole." The new song is a much lighter, synthesized track with a Top 40 feel as compared to the industrial rock genre of the original song. Cyrus performs a proper cover of "Head Like a Hole" as Ashley O at the end of the episode, after she sheds her controlling managers and purple wig.

"Rachel, Jack and Ashley Too" shows a small snippet of the "On a Roll" music video, which Rachel watches on her TV screen, but a week after the episode's release, Netflix has now dropped the full music video on YouTube. The sleek pop video shows Miley Cyrus as Ashley O doing choreography with a group of background dancers, but towards the end of the video, the screen begins to crack as we see glimpses of the depressing truth that lies beneath Ashley's bubbly surface. Check out the music video below:

"On a Roll" is just one of the many songs that Miley Cyrus will be releasing in 2019. A couple weeks back, Cyrus released her six-song EP She Is Coming, which is the first of three EPs that she is planning to release throughout 2019. She Is Coming, along with the upcoming EPs She Is Here and She Is Everything, will comprise Cyrus' seventh studio album She Is Miley Cyrus after they are all released this year. Clearly, Miley Cyrus fans are in for a ton of new music in 2019, and Cyrus' Black Mirror songs are an extra cherry on top since they do not appear on She Is Coming.

Although Netflix uploaded a full version of "On a Roll" to YouTube, the song and Cyrus' other songs from the episode are not available to stream On iTunes, Spotify, or other music streaming services at this moment. It is unclear if they will be added to streaming sites in the future or not. But at least fans can watch the music video now.