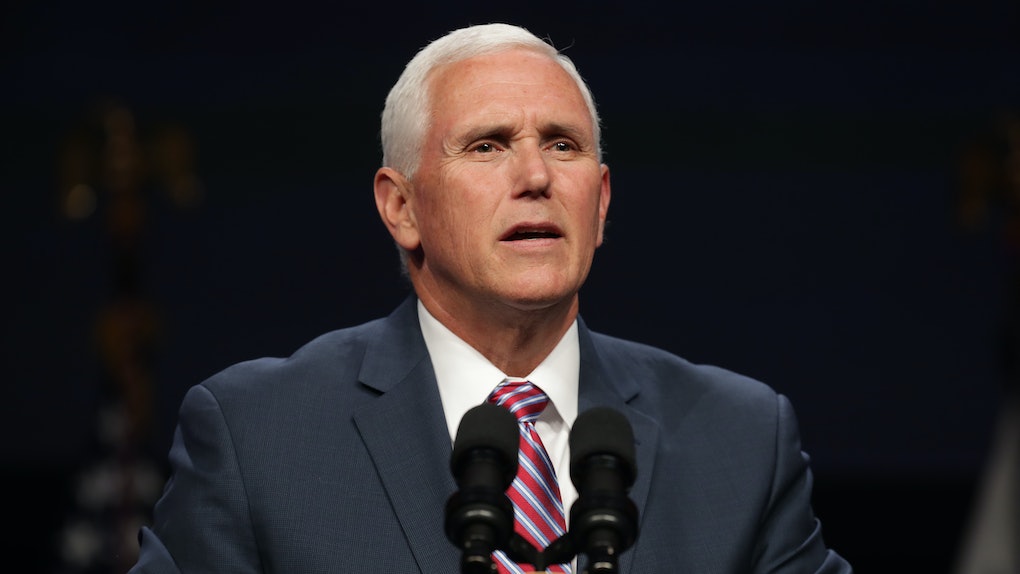 On Friday, July 12, Vice President Mike Pence visited a migrant detention facility on the U.S southern border, joining a growing list of politicians making trips to these facilities. After his visit, the vice president shared his thoughts on the conditions of the migrant detention center. Mike Pence's comments on his detention facility visit places the blame for the current conditions on Democrats in Congress.

After his visit to a detention facility near McAllen, Texas, Pence commented, per The Hill, that he was "not surprised" by the conditions and added, "I knew we'd see a system that was overwhelmed." According to Vox, Pence also said the conditions were "tough stuff." The McAllen facility houses around 400 Central American people and was reportedly filled with a foul odor and had extremely high temperatures, with some migrants saying they didn't have access to showers, toothbrushes, food, or bedding. Elite Daily previously reached out to the Department of Homeland Security (DHS) and Customs and Border Protection (CBP) about the reported conditions in detention centers but did not immediately hear back, but they did put out a statement on July 1, stating most Border Patrol agents care for migrants "humanely and compassionately."

In a Twitter thread Pence posted after his visit on July 12, he attributed the conditions to congressional Democrats. In one tweet, Pence wrote, "The crisis at our southern border is not a “manufactured crisis”, it is real and is overwhelming our system. To show this, we also visited an overcrowded facility for adult men, many of whom have been arrested multiple times." Pence blamed Dems in his following tweet, saying:

These men were in a temporary holding area because Democrats in Congress have refused to fund additional bed space.

In April 2018, former Attorney General Jeff Sessions announced a "zero-tolerance" policy to deal with the influx of undocumented immigrants that crossed through the southern border. The policy mandated people who cross through the border without documentation be detained and prosecuted, and since children and minors can't go to jail and through the criminal court system in the same way as adults do, they were separated from their families in order to be put through a different processing system. According to New York Magazine, when Sessions described the system at the time he said, "If you are smuggling a child, then we will prosecute you and that child will be separated from you as required by law. If you don’t like that, then don’t smuggle children over our border." President Donald Trump signed an executive order ending child separations and the Trump administration's zero-tolerance policy on June 20, 2018.

In addition to blaming Democrats for the crisis, Pence blamed CNN for being dishonest about his migrant detention facility visit. He tweeted, "CNN is so dishonest. Today we took reporters to a detention facility on the border for families and children and all told us they were being treated well." Later in the thread, he added that CNN didn't play any footage of the "excellent care being provided to families and children" and "only played video of men in the temporary facility." CNN hasn't specifically responded to the claims as of publication.

During his trip, Pence praised CBP officials for their work with detained migrants and also spent part of his visit speaking to detained migrant children, according to The Hill.

According to TIME, more than 50,000 migrants are being held in Immigration and Customs Enforcement (ICE) facilities, about 20,000 migrants are being held in CPB centers, and around 11,000 migrant children are being held by the Department of Health and Human Services (HHS). Elite Daily reached out to ICE, CBP, and HHS for confirmation of the reported numbers, but did not hear back from ICE and HHS at the time of publication. A CBP spokesperson tells Elite Daily the 20,000 count is "inaccurate, by a lot." According to Vox, the most recent number as of June 13 was 16,000, per stats sent to congressional staff.

Given the reported numbers of migrants in the overcrowded facilities, it appears finding a solution is necessary, no matter who is to blame.