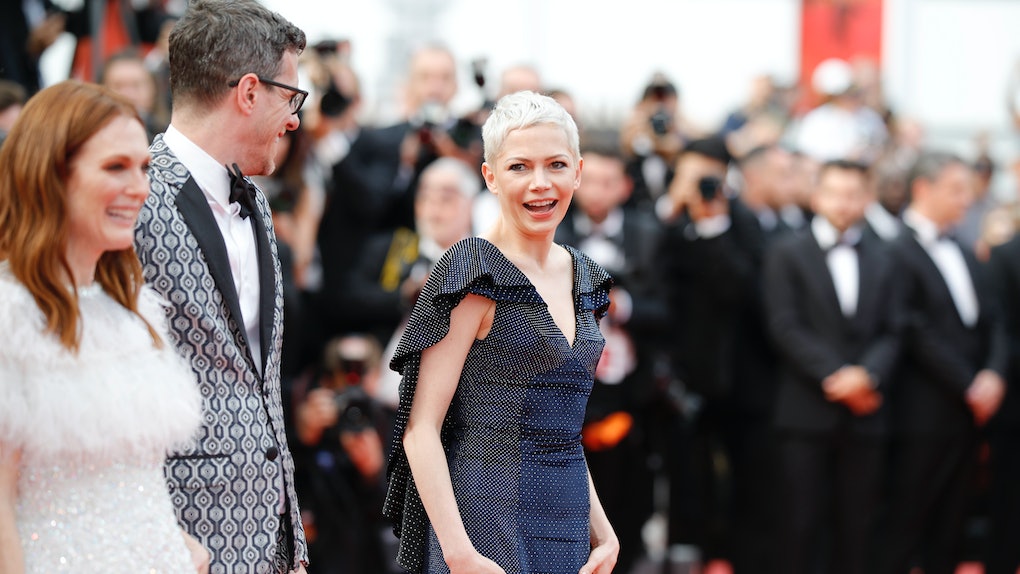 You've probably heard reports about a large pay disparity between Michelle Williams and her male costar, Mark Wahlberg, for a reshoot of All The Money In The World. The conversation has been mostly surrounding the (very different) salaries each actor was paid, but it ended with a very welcome donation to Time's Up from Wahlberg on Saturday, Jan. 13. Furthermore, Michelle Williams' response to Mark Wahlberg's donation took the time to thank Anthony Rapp, the individual who was the catalyst for the reshoot, and Twitter was very much here for it.

Before I get to the inspired response from Williams, it's important to remember that the All The Money In The World scenes needed to be reshot after Rapp's allegations of sexual misconduct against Kevin Spacey were revealed in October 2017 (Spacey claimed he didn't remember the encounter). Director Ridley Scott had originally said the scenes were reshot with little or no pay going to the actors, according to Entertainment Weekly. It later came out that Wahlberg had received $1.5 million for the reshoot, while Williams was paid less than $1,000. It doesn't take a math genius to realize that those numbers are not even a little bit close.

Following a week of public anger and bewilderment, Wahlberg announced on Jan. 13 that he was donating the $1.5 million to the Time's Up legal defense fund. After hearing of this, Williams responded graciously, and she made sure to bring back to focus the reason behind it all: Anthony Rapp.

According to a tweet from The Los Angeles Times reporter, Amy Kaufman, Williams' reaction read:

Today isn’t about me. My fellow actresses stood by me and stood up for me, my activist friends taught me to use my voice, and the most powerful men in charge, they listened and acted. If we truly envision an equal world, it takes equal effort and sacrifice. Today is one of the most indelible days of my life because of Mark Wahlberg, WME, and a community of women and men who share in this accomplishment. Anthony Rapp, for all the shoulders you stood on, now we stand on yours.

While she thanked her fellow actress advocates and Wahlberg for his generous contribution to Time's Up, Williams also made sure to bring Rapp, the reason behind the need to do a reshoot, front and center. He seemed to have been lost in the discussion when it came to the severe pay disparity between Williams and Wahlberg. Rapp was not lost in Williams' mind, though, and Twitter was happy to see his deserved recognition.

People were thankful for Williams refocusing the conversation.

"...it's almost like Rapp was forgotten for being the spark."

Rapp's recognition was very important to many people.

Williams was lauded for her thoughtful words.

People were relieved to see the reason for it all come back to center.

"I am so grateful to Michelle Williams for acknowledging Anthony Rapp."

Rapp said that he was just 14 years old in 1986 when he alleges that Spacey was sexually improper toward him, according to BuzzFeed. Spacey responded with a statement on Twitter that he did "not remember the encounter," and he offered his "sincerest apology" for what he described as "what would have been deeply inappropriate drunken behavior."

With the Time's Up and #MeToo movements surging in their visibility, there is a palpable feeling of real change that is about to happen, and the decision for Scott to reshoot All The Money In The World spoke loudly to further the cause to end sexual abuse and harassment. It was unfortunate that a lack of pay equality was revealed in the process, but it serves as another chance to realize that there is so much more work to be done.

It's also imperative to the story to mention that Williams recognized the reasoning behind the reshoot as a necessary one because of the allegations, and with that, she reportedly willingly gave up her reshoot pay, according to Entertainment Tonight. Rapp never appeared to be lost as the catalyst for this whole thing in Williams' mind, and her eloquent response now will help ensure that it's not lost on anyone else either.

More like this
Millie Bobby Brown's Quotes About Growing Up In The Public Eye Are So Real
By Brandy Robidoux
'He's All That': Premiere Date, Cast, Trailer, Filming News, & More
By Dylan Kickham
Which Album Will Taylor Swift Re-Release Next? Her Hints Have Fans Shaking
By Brandy Robidoux
Stay up to date